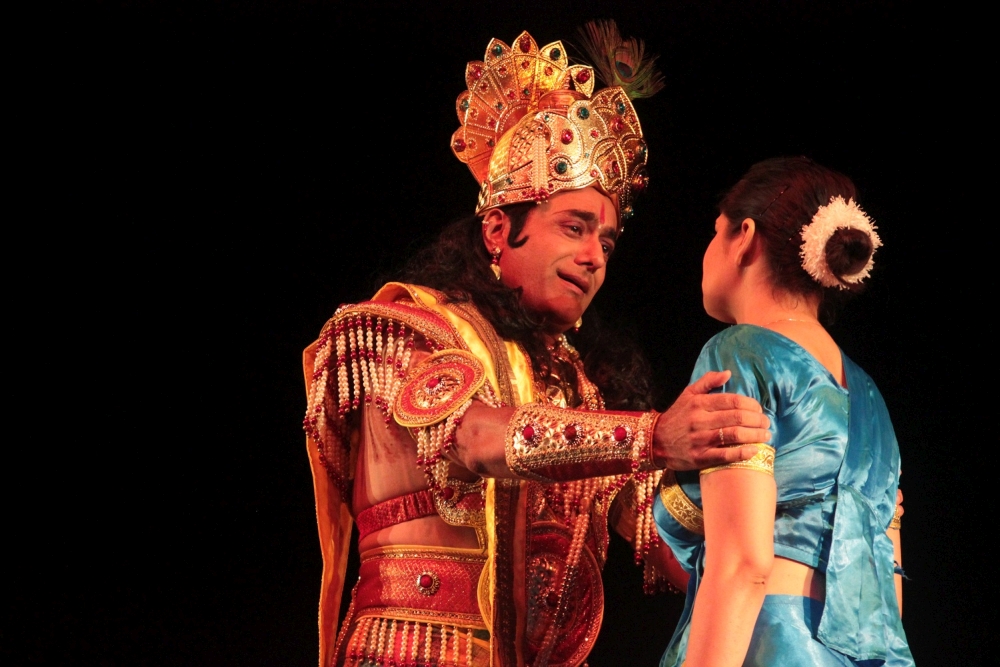 Shimla:Theater lovers of the city got a great opportunity to experience the magic Nitish Bharadwaj, live as Lord Krishna after 25 years, in an epic play Chakravyuh, during two days long play festival organized by The Films and Theatre Society, Delhi at historic Gaiety Theater, Shimla early this week.

While sharing his experience Nitish Said, “If was for the first time that I have perfumed in Shimla. It was my best show considering the audiences response. My forefathers also belonged to Himachal so naturally I have love and affection for this place. I feel that we all face problems and God resides in us all and there is only need to awaken him and rest everything falls in places.” During the two days fest two plays were staged that is Wo Lahore and Chakravyuh both plays were written and directed by Atul SatyaKoushik a well know name in the theater fraternity. Having an experience of over 12 years in theatre at various levels, his relation with the art form dates back to 2001. He formed ‘The Films and Theatre Society’ in September 2009 which is now a team of over 60 actors trained in the art of acting and play production by Atul. He has written 15 full length plays so far and has directed and staged more than 100 shows in the past few years. Each of his plays is different from the other in content as well as treatment. Atul belongs to the new age of playwrights, trying to fill the vacuum of good original Hindi plays which is being felt by theatre practitioners in India. His plays ‘ArjunKa Beta’, ‘Draupadi’, ‘Wo Lahore’ and ‘Bade Sheharke log’ are some of his promising contributions to original play-writing in India. He has also come up with some remarkable adaptations of classic Indian and foreign literature in the form of ‘KoobaraurKaaki’, ‘KaaliShalwar’, ‘Saudagar’ and ‘Animal Farm’. He has trained over 300 actors so far and has provided them coveted platforms to showcase their talent. He has been associated with many government, educational, corporate and social bodies and provided his expert services in the field of training and theatre workshops at, including Institute of Chartered Accountants of India (ICAI), Central University of Bihar, Birla Institute of Management Technology (BIMTECH), Competition Commission of India. Hehas trained nearly 2,500 professionals so far.

Wo Lahore, a mucial drama, is set in the middle of twentieth century’s India which has been the most written, most performed and most talked about part of Indian history. This is a story of an ordinary woman, a mother of three sons, who tries to keep her family intact amongst everything that is happening around. This play shows the internal conflicts and turmoil prevailing in an ordinary Indian family with the struggle for freedom, social beliefs of those times and the then partition in the backdrop. Beleaguered in different convictions, values and aspirations of her sons and husband, Jamuna, the protagonist of the play, is a representative of quintessential Indian women and mother. The play which is full of Indian music is a ride into various emotions and dramatic elements such as love, betrayal, hope, patriotism, comedy, poetry etc. Whereas Chakravyuh is an attempt to present the chapter of Chakravyuh from the great epic of Mahabharata in a new manner where hidden meanings, interpretation and learning from the philosophy of the Chakravyuh take the front seat, yet keeping all the action, glory, bravado and valor related to the incident equally important. Krishna as the protagonist in the play begins by establishing the importance keeping the learning from the mythology in our minds even though we forget the incidents of events that actually happened in them. When many questions emerge after the war of Chakravyuh Krishna appears and settles all questions, myths and misunderstanding of every one present. He passes on the eternal messages of Karma by telling no one has ever been able to come out of their respective Chakravyuhs as this whole life is a nothing but a Chakravyuh. Both the shows touched the heart of theater lovers and can be called show for classes. After a very long time plays of such great stature were staged that forced many old heartbroken theater lovers to enter the venue inspite of the pathetic condition of theater in the city. Him Rang Mahotsav -2015 staged at Gaiety