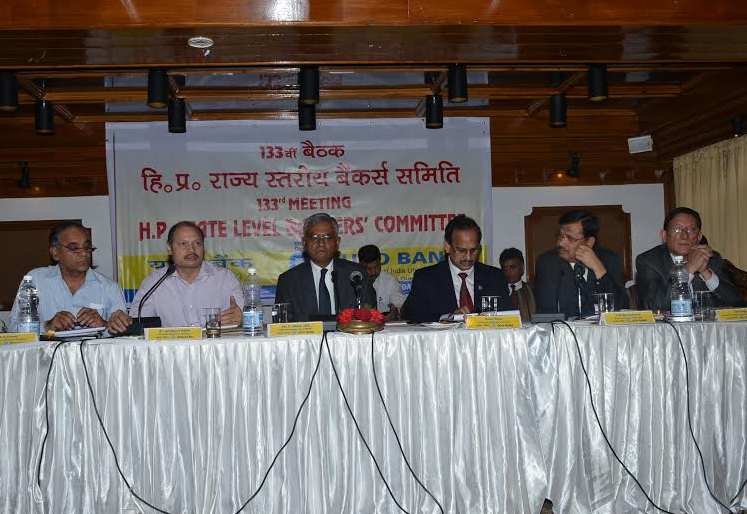 Chief Secretary P. Mitra complimented the banks for opening 1,92,500 accounts within a week under Pradhan Mantri Jan Dhan Yojna (PMJDY) in the State. He said that bankers should aim to open bank account of all left out households both in urban and rural areas of the State before the end of October this year.

P. Mitra, while presiding over H.P. State level Bankers Committee (SLBC) meeting here today, said that Himachal Pradesh was well placed in banking sector as economy and education of the people was quite good as compared to other States. He said that in Himachal Pradesh there was 3757 per branch population against national average of above 13000 having high proportion of 89 percent of households availing banking services.

Chief Secretary said that still there was a need of greater participation by financial sector to increase usage of basic banking services through technology enabled services, innovation of products and services.

P. Mitra said that the credit growth during the first quarter of current fiscal was 20.15 percent as compared to deposit growth of 12.23 percent which has helped in improved Credit Deposit (CD) ratio. He said that the national parameters set by Reserve Bank of India (RBI) for financing to priority sector, agriculture sector, weaker section and women were achieved by the banks except Differential Rate of Interest (DRI). He said that banks should open branches in unbanked areas as out of 16 branches opened during the first quarter only 6 branches were opened in unbanked areas.

He said that all the sponsoring agencies and departments should sponsor 150% to 200% loan proposals under different government sponsored programmes and schemes to the banks as the performance was not upto the mark in this area. He said that banks should provide liberal funding in the rural areas as there was vast scope of development in agriculture and allied activities in the State.

Kaul said that CD ratio in the State was 65.96 percent as of June, 2014 and it has registered growth of 1.23 percent over the previous year. He said that Banks in the State have network of 1827 branches with more than 80 percent branches located in rural areas out of which 149 branches had been opened previous year. He said that there were 1497 ATMs operational in the State. He sought the help of State Government to improve the recovery performance of banks which was recorded 71.33 percent upto June last.

45 lakh medicinal plants to be planted during current year