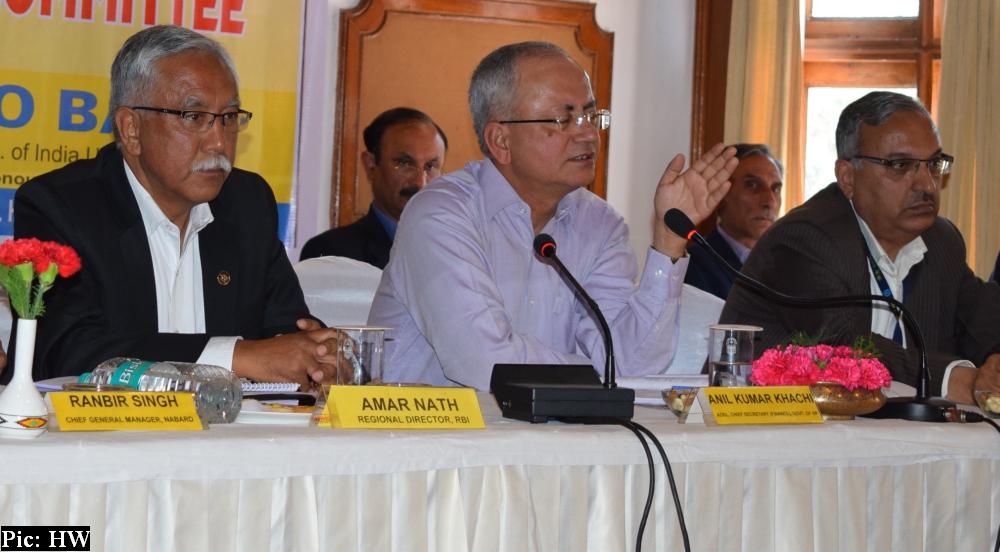 Shimla: About 2131 bank branches and 1879 bank mitras were catering to the needs of the people in far-flung areas of the State.

Each branch of the bank was providing banking services to average 3221 people, which was far better than the national average of 11000 people per branch of the bank, informed the Additional Chief Secretary, Finance Anil Kumar Khachi while presiding over the 148th State-level review meeting of Bankers Committee today.

The Cash Deposit Ratio in the State was about 44.82 percent, and the banks were asked to raise the cash deposit ratio to 60 percent as fixed by Reserve Bank of India.

As per government statistics, till March 2018, the banks provided 5625.68 crore loans to 4.18 lakh farmers under the Kisan Credit Card Scheme.

The General Manager, UCO Bank Vivek Kaul said the banking sector had achieved an annual growth of six percent and its deposit and advances were Rs. 1.06 lakh crore and Rs. 37481 crore respectively.

An investment subsidy of 25 percent would be provided on an investment of rupees one crore besides five percent interest subsidy for three years on loans taken from banks.

The banks are also expected to encourage this investment so that people of the remote area could get better health education nearer to their homes, he said.

The banks were urged to participate in ‘Jan Manch’ Programme of the State government so that people living in rural areas could be educated regarding various schemes being implemented by the State and Central Governments.
.
Anil Kumar Khachi said that under ‘Gram Swaraj Abhiyan’ 93 villages of the State had been selected for making them financial inclusive. He said that in the second phase of Gram Swaraj Abhiyan, a target to achieve Chamba district as financial inclusive has been fixed.

A provision of subsidy has been made to start self-employment ventures by the youth between the age group of 18 to 35 years.

A provision of five percent interest subvention has been made on interest on the loans up to Rs. 40 lakh raised from the banks for the period of three years.

It was informed that the banks were urged to provide more loans to the farmers so that they could opt latest farming techniques to enhance their income.

Video: College students thrash man in Shimla after he allegedly calls them Naxalites