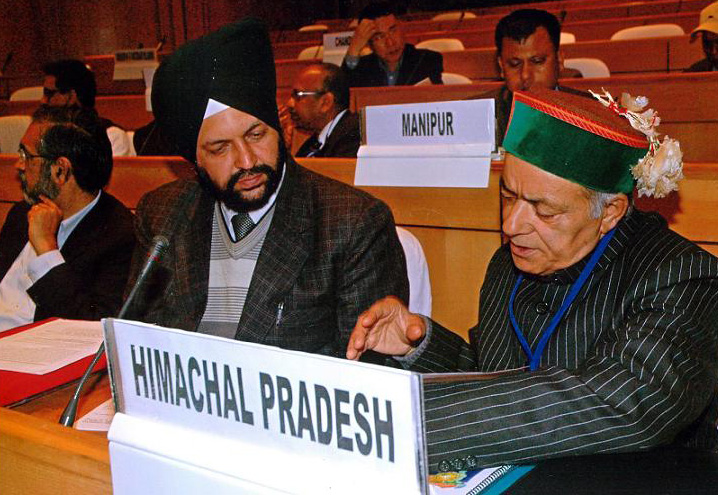 The HP State Forest Department was considering to formulate a policy of auctioning the felled/grounded trees by chopping them into ‘Geltus’ (round logs) said Forest Minister, Thakur Singh Bharmouri while speaking in a function organized by the HP Rangers Association and HP Forester Association at hotel Peterhoff, late last evening.

The felicitation function was organized to honour the Forest Minister for achievements and contribution in Political and Social fields, as recognized by the Indian International Friendship Society, a voluntary organization with a committee of renowned journalists, bureaucrats, army officers of highest rank, Members of Parliament, Economists etc.

The Minister said that instead of cutting the trees and converting them into sleepers and thereafter bringing them to the sale depots of corporations which were located at quite a distance from the jungles, a policy was under consideration for nearby roadside auction of the ‘Geltus’ (round logs and not sleepers) at the spot only which would not only save the excess labour costs but would also save the corporation from the transportation, and other charges.

The Minister said that Forest Check Posts (FCP’s) which were closed during the BJP regime would be re-opened. He said that the forest department had also decided to fence the boundaries with the cement poles rather than wooden ones. Besides, the Government has decided to export the remaining excess timber after it fulfills the needs of the people of the State.

He said that the criteria for the selection of the Guards had been made easier with few changes in the recruitment pattern and the age bar for applying for the Guards have been enhanced to 28 years, which was 27 years, earlier. This would also benefit most of the unemployed youth of the State, said he.

“My dream now is to see Himachal Growing Green and forest area to increase more in times to come”, said Bharmouri, adding that it was due to the initiatives of Chief Minister Virbhadra Singh who during the time of former Prime Minister, late Smt Indira Gandhi, took a pledge to wipe out forest mafia from the State and since then the Chief Minister had left no stone unturned in making eco friendly policies and protecting the forest wealth of the Pradesh.

The Minister assured to the demands regarding the transfer policy of the Deputy Rangers and the Forest guards and credited the award he got to the employees of the department and the corporation.

Speaking on the occasion, Vice-Chairman Forest Corporation, Kewal Singh Pathania said that the department had00088 initiated several measures in the interests of its employees and had appointed 205 Forests Guards in the present tenure of the Government. Besides, 18 Rangers, 75 clerks and more forest guards would be appointed in near future. Apart from this 36 daily wagers were regularized in the department.

He said that the appropriate measures had been adopted to fight forest fires. The decision taken to restore the Timber Distribution (TD) rights was indeed a historical decision which was going to benefit many people of the State, added he.