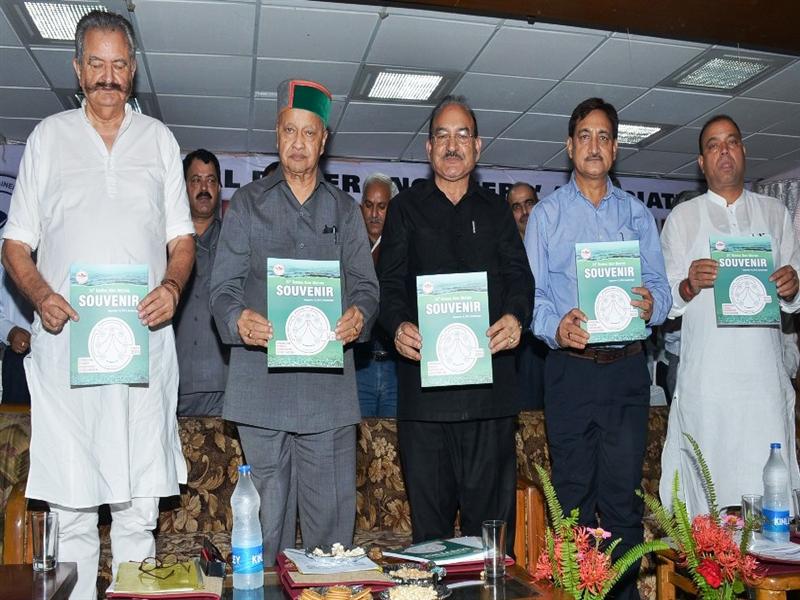 The Government has approved Rs 1464 crore Financial Restructuring Plan of the Board and it was committed to provide 24 hours subsidized power to the people of the State as well as to every household in the remotest corner of the State, stated Chief Minister Virbhadra Singh, while speaking on the occasion of the 24th General Conference of Himachal Pradesh State Electricity Board Limited Powers Engineers Association at Sundernagar in district Mandi today.

He said that subsidized domestic energy to consumers amounting to Rs 388 crore was being provided to the people of the State, adding that the Government has decided that the power producers would not be required to take no objection certificate from the Irrigation and Public Health Department, PWD, Revenue and Fisheries for setting up hydro projects in the State. He said that this was being done to promote the entrepreneurs to invest in Hydel sector in the State. He said that to promote the private participation in hydel generation sector, five new projects were given to HPSEB Ltd for further allotment to private bidders and the techno-economic clearance for three such projects have been accorded by the Government.

The power engineers should come forward to accept new challenges and continue to work with devotion and dedication so as to contribute in making Himachal a pioneer state in the field of power distribution and production, he asserted. “I want to see HPSEB emerging as a strong and economically vibrant power utility to deliver better service to the people of the State and I assure that my Government would always be there to meet out the genuine demands of the board” said the Chief Minister. He said that Himachal Pradesh had been blessed with 27,432 MW hydel potential and was able to harness 8432 MW of hydro potential in the State and was targeting to exploit 2000 MW of power potential in this fiscal.

Virbhadra Singh said that HPSEB Ltd. have completed targets under ‘Rajeev Gandhi Grameen Vidyutikaran Yojna’ and ‘Restricted Accelerated Power Development and Reforms Programme’. He said that the 10 MW Ghanvi-II in Shimla district has started generating power and 100 MW Uhl project in Joginder in district Mandi was in the final stage of execution. Both the projects were being commissioned by HPSEB ltd.

The Chief Minister said that the Board is also executing capital expenditure works amounting to Rs 440 crore per annum for improving voltage supplies and to manage increasing load in rural and industrial areas. “I am happy to learn that losses of the Board has been brought down to 14.5% and I hope that the Board will initiate measures to reduce it further to improve the Boards income and functioning” said the Chief Minister.

Virbhadra Singh said that for evacuation of power, the Government was considering to set up 220 KV electricity sub-station at Mandhala in Baddi and 132 KV sub-station at Gaura in district Solan has been recently energized, which would not only improve the reliability of electricity supply in Solan area but would also help in lifting adequate water supply for the people of the town.

Chief Minister said that the Government has allocated the Government share of equity power in Nathpa Jhakri to HPSEB to meet the necessary requirement of the Board and to increase its income. He said that the State Government was committed to take all possible measures to improve the financial health of HPSEB limited. He also advised the Board to take corrective steps to curb the unnecessary expenditure and try to fill functional posts as per the requirement in the fields and professional posts. The pattern of field staff has to be changed and it must be ensured that sufficient numbers of employees are deployed all over the State. He advised them to explore more resources of income generation.

He announced for restoration of one post of Chief Engineer (system Planning).

Chief Minister said that the State was not getting its due share from BBMB which was a major power producer in the State distributing power supply to other States. Many people mainly Bhakra oustees were not rehabilitated till date and were offered land in Rajasthan, Haryana and elsewhere”, he said. The BBMB was withholding the share of the State despite the State has won the case pertaining to its share in the Supreme Court. It is a right-full claim that Himachal Pradesh be a part of BBMB share and we will not accept the step-motherly treatment, he asserted.

He said that engineers were the backbone of the Board and the Government has taken numerous decisions to benefit its employees, During last more than 20 months of its regime as many as 24 Assistant Engineers (electrical) have been appointed besides around 25 more such engineers were being appointed soon.

He also released the souvenir on the occasion.

MPP & Power Minister, Sujan Singh Pathania while speaking on the occasion said that the rapid development in power sector has taken place and initially in the year 1971 where there were only 3279 electrified villages, today the State has achieved cent percent electrification target which was a stupendous achievement. He said that a vast network of transmission and distribution lines had been laid in the

State. Initially, it was 8800 kilometers in 1972, and now the length of these lines was 92,869 kilometers. Besides, the energy consumption has also undergone a tremendous growth which stands as one thousand and seventy two units as of date. He said that the Government was allowing preferential allotment of up to 5 MW projects to the bonafide residents of Himachal Pradesh.

He directed the authorities to ensure proper architecture of the College building. He also directed them to make adequate provision of playground and other basic infrastructure in the College campus.

CM urges World Bank to include H.P in priority list for funding