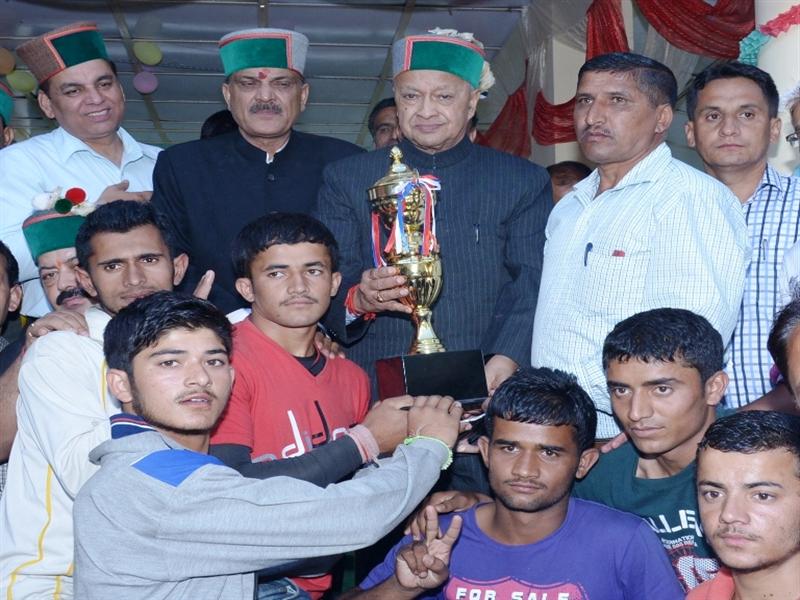 Chief Minister Virbhadra Singh while presiding over the closing ceremony of Rajmata Shanti Devi under-19 district level Boys school sports Tournament, at Senior Secondary School, Taklech, in Rampur Subdivision of District Shimla, here today said that he was very much pleased to be amongst the students on the occasion and congratulated the teachers and other faculty members and people of the area for successfully conducting the tournament.

He said that he was well aware of the problems of the people of the area regarding road connectivity and directed the PWD authorities to complete the road to Kashapat as soon as possible, the work on which was going on war-footing. He said that the people of the State had an important place in his heart and he was committed for overall development of the State. He said that it was late Dr. YS Parmar, the first Chief Minister of the State, who dreamt of making Himachal a separate State and due to his initiatives and efforts of former Prime Minister late Pandit Jawahar lal Nehru and late Smt Indira Gandhi that Himachal Pradesh became 18th State of Indian Union. It was the Indian National Congress which gave impetus to the development in the State as opposite to the BJP, which was bent upon to divide the people of the State on the basis of caste, colour and region.

The successive Congress Governments have always taken care of the grievances of the people of the lower belts of Himachal Pradesh and took a decision to hold Vidhan Sabha sessions in Dharamsala in district Kangra”, he said adding that it shows the concern of the Government for all the people equally.

He said that it was painful that the opposition was not playing a constructive role and regular walkouts and hullabaloo during the budget sessions had become a routine affair, which affects the development policies.

“The opposition always abstained from attending the Vidhan Sabha Sessions and discussing the issues of development” he said, adding that it causes delay in taking important issues and decision to be taken for the welfare of the people of the State.

He said that the Sports should not be politicized but few people and politicians in the State committed many irregularities in the name of Sports under the garb of Cricket Associations, which won’t be allowed in our state. No body would be allowed to play with the future of our sports-person or budding players of the State in any game may it be cricket, hockey or any other game and the guilty would be brought to the book.

The Chief Minister cautioned that no one in the State will be allowed to play with sentiments of players by forming fraudulent companies or organizations which beats the true spirit of the games, if formed for self gains.

He said that the demand of taking up sub-tehsil issue would be looked upon depending upon the formalities to be completed and in consultation with the cabinet. The Chief Minister assured that the matter for setting up Gas agency at Taklech would be taken with the central Government and directed the Deputy Commissioner to take up the matter.

Later, he inaugurated Rehan Basera Guest House at Rampur constructed at a cost of Rs. 40 lakh.

The Chief Minister was accorded warm welcome by Rajinder Singh Rana, Principal of the Government Senior Secondary school Taklech who also detailed about the tournament in which as many as 700 students of eleven zones participated. The Chief Minister was also welcomed by Sports in-charge and Assistant District Physical Education officer, Joginder Singh and School Management Committee President Mohinder Thakur on the occasion.

The Chief Minister took salute of an impressive march-past and also distributed prizes to the students.

Nand Lal, Chief Parliamentary Secretary, while welcoming the Chief Minister thanked him for dedicating projects worth crores in Taklech today and said that the people of Taklech and its surrounding seven to eight Panchayats were thankful to the Government and especially to Virbhadra Singh for carrying out development activities in the area. He said that the people of the State would ever remain indebted to the Chief Minister for undertaking massive development activities all over the State whether it be education sector, IPH, roads, electricity, health or welfare sectors.

The Theog Zone was declared as the all around best in the tourney bagging maximum prizes in different events.

The delegation of Gram panchayat Kashapat, led by its up-pradhan Phula Singh, presented a cheque of Rs 21 thousand towards CM relief Fund. The Chief Minister appreciated their efforts and said that the contribution made by them from their well earned earnings will go a long way in serving the poor and the needy.

A colourful cultural programme was also displayed on the occasion.