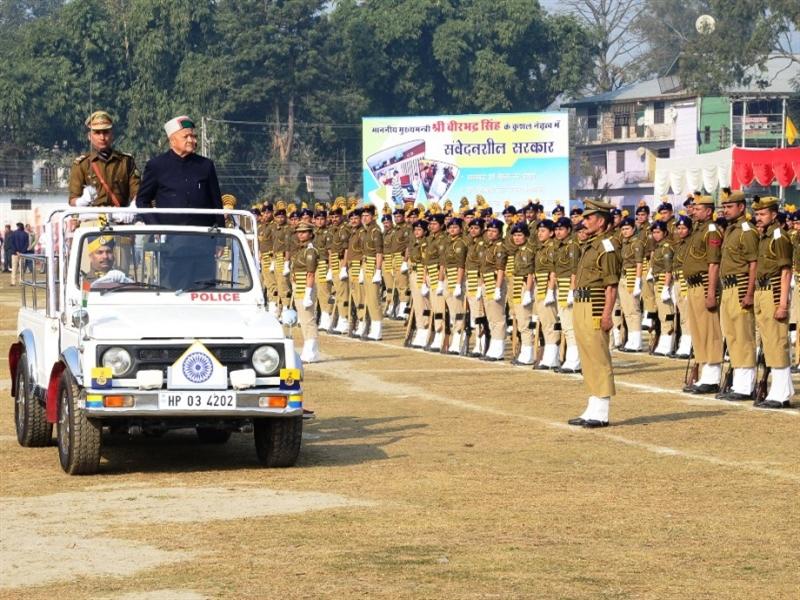 He hoisted the National flag and took salute from the impressive march past by contingents of Police, Home Guards, NCC Cadets and school children.

He said that the real credit of the unprecedented development goes to the hardworking people of the State and also to the leadership provided by successive Congress governments at the Centre and the State.

He announced up-gradation of Government Middle School Jhunga-Devi to Government High School and GHS Harsi to Government Senior Secondary School, construction of science block at Jaisinghpur College and starting of science classes at GSSS Sari. He also announced up-gradation of GHS Tangroti to GSSS at Dharamsala. He also announced construction of additional accommodation in PWD rest house Jaisinghpur and new Primary Health Centre (PHC) at Jagrupnagar besides a Veterinary Hospital at Harsi.

The Chief Minister said Dharamshala had been made second Municipal Corporation of the State to ensure planned development of this town. He said Chadiar, Haripur, Gangath, Panchrukhi, Alampur and Darini were made Sub-Tehsils and Dadasiba as Tehsil by the present government. Apart from this, a new sub-division had been approved for Jawalamukhi whereas Tehsil Welfare Offices had been opened at Shahpur, Nagrota-Bagwan and at Rakkar in Pragpur in Dehra sub-division.

Counting the development achieved in the Kangra district during last three years, he said a sum of Rs. 26 crore was being spent under Rajeev Gandhi Electrification programme and to give fillip to tourism in the district, approval had been given for Himani-Chamunda rope-way and the foundation stone of rope-way between Dharamsala to Macleodganj had been laid which would be completed within one and a half years. The work to replace the old transformers in Dharamsala and Yol Cantt was in progress and Rs 3.60 crore new electric Sub-station would be constructed at Damtal.

The Chief Minister said 166 kilometres of new roads and 29 bridges were constructed in the district. He said 8842 hand-pumps were installed during this period and 62 new irrigation schemes were under construction. AS many as 66,450 persons in the district were being provided social security. He added the decision had also been taken to open Football academy at Dharamshala.

Virbhadra Singh said last three years had witnessed speedy and all-round development of all areas of the State and government was implementing various policies and programmes to ensure welfare of every section of the society. He said with the blessings and affection of the people of the State, he was fortunate to serve the State as the Chief Minister for sixth time and his top priority was ensure a transparent, responsive and efficient administration for welfare of the people.

He said that government had adopted its election manifesto as a policy document and had gone beyond to fulfill the promises made in the manifesto. Around 1365.65 kilometers of new motor-able roads and 134 bridges were constructed during last three years and 255 villages had been provided road connectivity.

The Chief Minister said emphasis was being laid on providing houses to poor and needy. As many as 13652 houses had been constructed under Indira Awas Yojana by spending Rs. 8538.65 lakh and 2141 under Rajiv Awas Yojana at a cost of Rs. 2280.47 lakh. Besides, three Biswas of land was being provided to the landless in rural areas and two biswas in urban areas.

He said 994 new schools had been opened or upgraded and 25 new degree colleges have been opened in rural areas during last three years. More than 100 health institutions were opened or upgraded and 1775 posts of various categories had been created for three new medical colleges to be opened shortly in the State. The government was effectively implementing ”Rajiv Gandhi Anna Yojana” to provide ration at subsidized rates to about 37 lakh people of the State. All ration card holders covering more than 77 lakh people of the State had been brought under PDS BPL families were being provided 35 kilograms ration as before.

The Chief Minister said social security pension had been enhanced from Rs 450 to Rs 600 per month and persons above 80 years of age were being given Rs 1,100 per month irrespective of their income. As many as 6,949 additional habitations had been covered under rural water supply scheme and Rs.

773 crore were spent on water supply schemes besides installing 4,887 hand pumps during this period. He said 10,586 hectare area had been provided irrigation facility by spending Rs. 400 crore. The work was in progress on channelization of Swan river in Una district and Chhonchh Khad in Kangra district while Rs. 191 crore River Pabbar channelization Project in Shimla district had also been approved.

Virbhadra Singh said new state-of-art industrial areas were being established at Kandrauri in Kangra district and Pandoga in Una district at an estimated cost of Rs 95.77 crore and Rs 88.05 crore respectively. Time bound clearances are being ensured within 45 days from the date of submission of common application form for setting new industries. He said that 1,07,887 youth had been benefitted under Skill Development Allowance Scheme so far being implemented for skill development of the unemployed youth.

The Chief Minister also distributed the prizes to the participants of the cultural troupes.

Rohtang Pass to get 50 CNG and 25 electric buses worth Rs. 55 crore