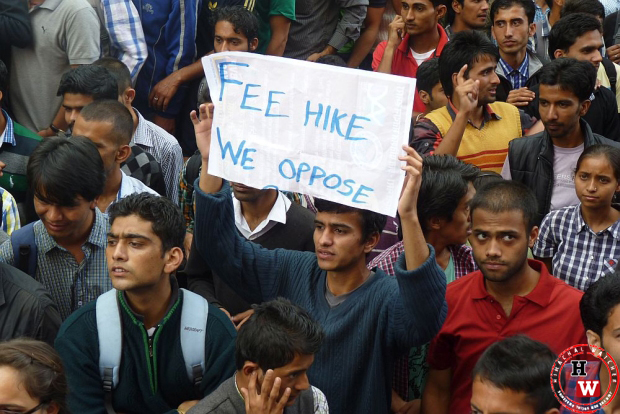 What began as a peaceful agitation for student rights was unexpectedly transformed into a conflict by the state machinery yesterday. Today, the scenario is such that students leaving their political ideologies behind have united in one voice against the inappropriate Government policies.

Today, protesting students– who had been rigorously yet peacefully striving for fee reversal and re-instating of SCA elections in the University campus, have been compelled by the heinous act of the HP police, to take to the streets of the State Capital.

A movement that was kept alive by the valiant efforts of a particular student’s union until yesterday, has today found support –ABVP has joined hands with the gallant SFI students and are raising a united voice against the State Government and the Police atrocities. Students compelled to stay out of the university (which is converted into a police cantonment), today gathered in a large number in front of the SP office (Shimla), under able leadership of SFI and ABVP (who stand as one body without badges). The joint front has declared that atrocities and self-centered attitude of the State Government and the incongruous act of the State Police is highly condemnable and it will not be tolerated any further.

A Warning to the HP Govt.

The student leaders from the joint front have called out to the people of Himachal Pradesh to come out in numbers to support their fight for a cause. They have drawn public attention towards the wrong doing of the police, the authorities that demand such action from the police, and the main issue of whopping hike in the fee structure across all courses in the Himachal Pradesh University.

Students have appealed to the parents to understand that this unfitting rise in fee, and calling off of the elections for SCA (only body that can question the University authorities against such anti-student policies), is not at all in favour of their wards. It will not be justice with the present and the forthcoming students of the HPU. Students have requested one and all to come out and join them in their peaceful protest against the suppressive authorities. What happened in the University yesterday was really disgraceful, irrespective of the light it is seen in. It goes on to show how the State machinery can be misused to oppress human rights. The Scene at HPU Campus, Today.