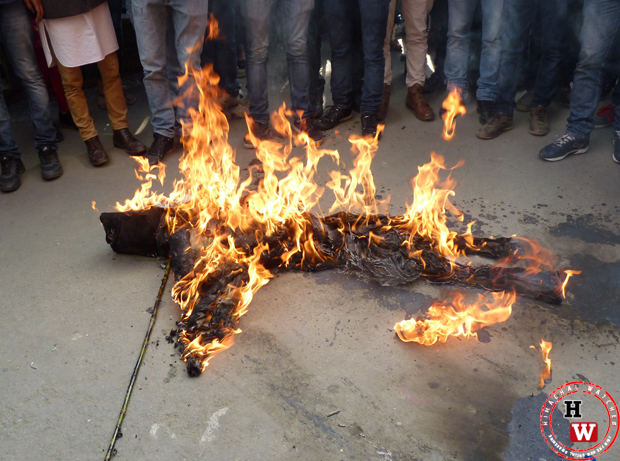 The joint action committee, which comprises of ABVP and SFI, today staged another aggressive protest in front of Shimla DC Office and burned the effigy of HPU VC ADN Bajpai amidst loud slogans demanding the rollback of hiked fees and the removal of the corrupt VC. Many other colleges around Himachal did the same; burned the effigy the VC as a protest. Here is what JAC members said:

While both of these student organizations are opposing arbitrary fee hikes under one banner (Joint Action Committee), NSUI had submitted a written complaint to the Shimla DC against the JAC, saying that ABVP and SFI are spoiling the academic environment at HPU campus along with all colleges in Himachal, and supported CM Virbhadra Singh. Also, NSUI supported the police lathicharge, which was actually a brutal assault, and stated that the action was taken to maintain the law & order at HPU. Now, we suppose, NSUI would find it disappointing as their agenda against JAC disappeared or say solved by the JAC. Also, NSUI is supporting and waiting for the finding and review of the special committee that the CM had formed after student protest took a massive form. Regarding the last protest rally of the students, which was staged in front of HP Secretariat, Virbhadra Singh expressed his displeasure and said, “it hurt him”. We wonder why the unrest of the students, who are staging protests from past many months, 20 days of chain hunger strike, and lathicharge on students did not affect the CM of the state in anyway, but the protest against his silence on student grievances did. The research scholars are forced to come out on streets to protest, the university has been converted into a police cantonment with an ongoing imposition of 144. None of it hurt the CM, but the protest of suffocating, burdened students displeased him. Anyhow, the students had warned the Govt. about more aggressive protests in the coming days if it did not withdraw the fee hike decision and the ban on the SCA elections. Also, the SCA (Student Central Associations) elections were not banned completely; rather, the process was changed from direct to indirect elections. Why to form the SCA at all when it is not to be consulted before making policies for students? The VC elected meritorious students to form the SCA for this session, which immediately resigned and stood in support of direct elections in a democratic way.

The public is still deaf and dumb towards the clouds of Govt. atrocities that haunt the future of Himachal, but fortunately, the young guns looks determinant to stand against the dictatorial politics going on in Govt. educational institutes. Anyway, the remains of the effigy, which were left behind by the protestors, should have been packed and sent to the VC. On a serious note, the students should have removed the residuals and ash from the street.