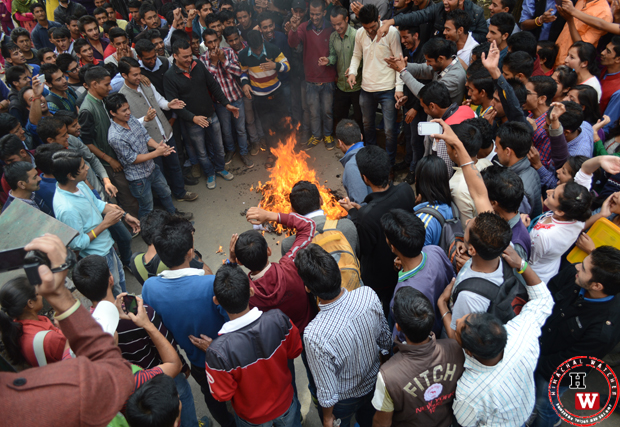 SHIMLA-Today was the day when students would burn CM’s effigy as a protest, but unlike other days, this time police was seen putting more efforts to follow the orders. They did not allow passersby and onlookers to see what was happening amidst loud slogan shouting and the smoke which rose from the burning effigy. Media persons were also a subject to indirect warnings and press card checking.

HP Police had warned the students that if the effigy was burnt, cases will be registered against the violators. They tried hard to get hold of the effigy, but student dodged them and did successfully stage their symbolic protest. There was no drop in the level of aggression in student voices. The student protest against jolting fee hikes in Himachal Pradesh University and in all affiliated colleges still continues. It’s gaining momentum right after the extremity of suppression and misuse of our police, but the HP Govt. and the HPU administration are pretending to not have noticed it.

After the HPU VC’s effigy was set on fire a couple of days ago, today, the students burnt that of the CM, Virbhadra Singh’s, in front of the Shimla DC Office. So, today, the police made sure that no one from the common public or any other passerby could inquire what was going on there. Of course, the CM won’t like people to watch his burning effigy. When did this ordinance approved to ban photography on the Shimla Mall? Was there something which must not be photographed and shown to the public? What does a protest gathering and effigy burning mean if it were not to attract the attention of other citizens, who deserve to know why a section of their own people is in so much unrest? Many people tried to get a glance of gathering and the source of rising smoke, but the dedicate policemen did not let it happen at any cost. A senior citizen was attracted by the slogan shouting and tried to move towards the source of this noise. When he was denied to go near, he said, “Mujhe sirf dekhna hai kya ho raha hai”, but wasn’t allowed. The police would say the spot was prone to a violent incident and it was for the safety of the public. Well done HP Police. Unidentified faces with cameras are dangerous, especially those DSLR and Semi-DSLR types. We do not question the discretionary powers that the police is given to inquire a suspicious person, but we do wonder what harm or threat a person with camera would do. Of course, the acquainted faces of local reporters from dailies need not to be directed. It doesn’t matter what they capture, but what matters is the consent to publish it. To those who still think that these protests are mere political nuisance, which are spoiling academic environment of the college and that of HPU campus, we would like to request, again, that dive deeper into the pool of these events and you’ll notice many relevant issues related to our fundamental rights like those related to staging protests.

Lathicharge, arresting protestors, stop protestors and their buses as to stop them from reaching the spot of the rallies, not allowing cameras, and deny common public to hear and see the protests, these aren’t the thing our Govt. should focus on. There must be a reason that these student, whom the police trashed brutally, returned to protest again, and the reason is apparent; they are against putting the education and degrees on sale, so that each one of us could utilize the equality of the opportunity to access the education.

The student protest is likely to continue if the Govt. kept ignoring the student unrest. The Joint Action Committee of HPU students had already announced the dates for various protests throughout Himachal including ‘Chakkajam’ and ‘Mass arrest campaigns’. Rest, wait and watch how much the Govt. cares for the grievance of these students and their parents, who will have to bear the heavily hiked fees. 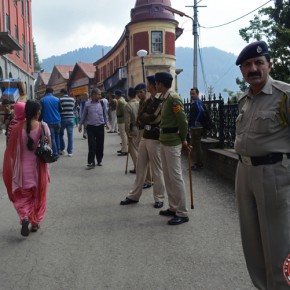 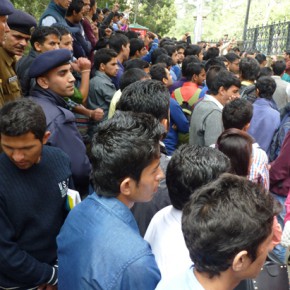 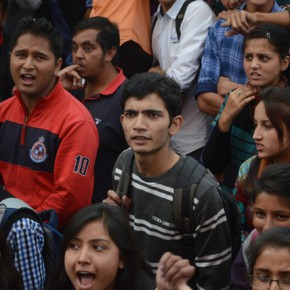 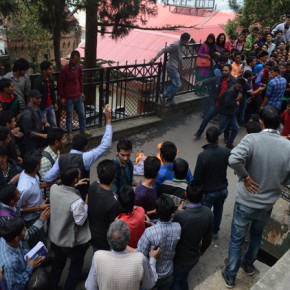 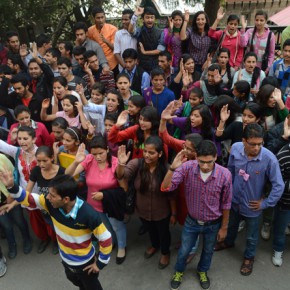 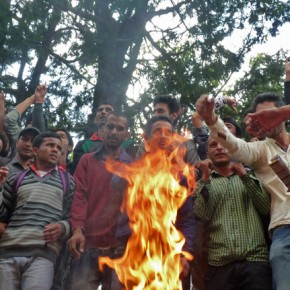 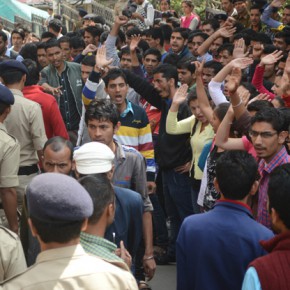 Amidst rising flames and protest in Himachal, JAC asks student to attend classes