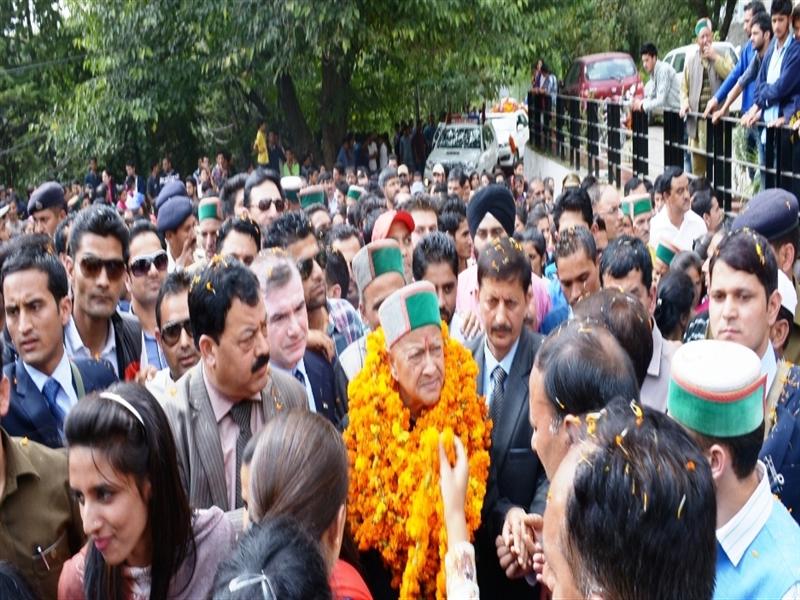 The State Government was considering for the channelization of river Pabbar and the designs of the same have been prepared. The river will be channelized from Sandasu onwards towards Rohroo and work of channelization would be allotted to a reputed agency. This was stated by Chief Minister Virbhadra Singh after inaugurating the elegantly constructed auditorium and library hall of the Government Post Graduate Degree College (Seema), Rohroo, constructed at a cost of Rs.7.25 crore today

He said that the road from Dodra Kwar to Rohroo would be further improved to pave the way for boosting tourism activities, adding that Chanshal slopes were more suited to skiing and other adventure sports activities and once developed will provide direct and indirect employment to the youth of the area.

He expressed happiness over dedicating the new block of the college to the coming generations, the foundation stone of which was laid by him in year 2005.

He said that the location was quite suitable for the college as it was centrally located and the students from as far as Dodra Kwar could pursue higher studies here. He said the Colleges at Seema in Rohroo and Saawra at Saraswati Nagar were started simultaneously and the Seema College had excelled in pursuing academic and sports. He announced for construction of an additional block for office and staff room for Seema College behind the present principal’s office. It would also house class rooms in the same complex, and the staff residences would soon be completed.

The Chief Minister stressed the need for playing ground in the college. He said that the people should not quote higher rates for the land whose land falls within the purview of the Government developmental surveys. Few development works were being hindered because of land acquisition problems. He exhorted the people to co-operate in carrying out the development works and other such activities.

He said that there was need to check that no hindrances were created in development activities. As much as 25 Bigha of land will be acquired by the Government for constructing play ground for Seema college and the adequate compensation would be paid to those whose land would be acquired for the purpose. He appealed to the people to donate land voluntarily.

Referring to the agitation in HP University, he said that the studies were going on well in all the colleges of the State adding that no union or association would be allowed to become a sub-branch of student politics and elections should be held in a peaceful and decent manner.

The Chief Minister said, “if anybody promotes mischief and violence it will not be tolerated at any cost”. He stressed for holding elections to the Students Association through common consensus and in a harmonious manner.

“If anybody tries to lock the gates of the colleges or restrict the students from entering into the classes, he should be ready to face the consequences.” said he, repeating that he was there to listen to them and their genuine demands, but the indecent behavior won’t be tolerated.

“We have not enhanced the hostel fee or the tuition fee but there was a little hike in examination fee due to which furore was being created by few who want to keep themselves alive in politics. The fee issue was the matter of the University to see. He said that only examination fee was enhanced and that too was quite nominal.

To provide quality higher education to the children at their very doorsteps the Government has opened as many as 15 colleges in the State and that too in rural and far-flung areas during its present regime. Emphasis is being laid on educating girl child in far flung and rural areas, he said.

Local MLA, Sh Mohan Lal Bragta and Block Congress President Rohroo, Sh Ishwar Dass Choharu thanked the Chief Minister for dedicating the auditorium complex to the students of the College and for the developments which had taken place during the regime of Congress party.

Earlier, Principal of the College Dr B.L. Vinta honoured the Chief Minister and other distinguished guests on the occasion. He also read the annual report of the college and said that this was the only college in the State where the studies were not disrupted due to recent agitations.

A colorful cultural programme was also organized on the occasion followed by Dance Drama.

The Chief Minister honoured the meritorious students both in academics and sports and also the staff and faculty of the college for dedicating themselves in teaching profession.

B. S. Thakur proposed vote of thanks.