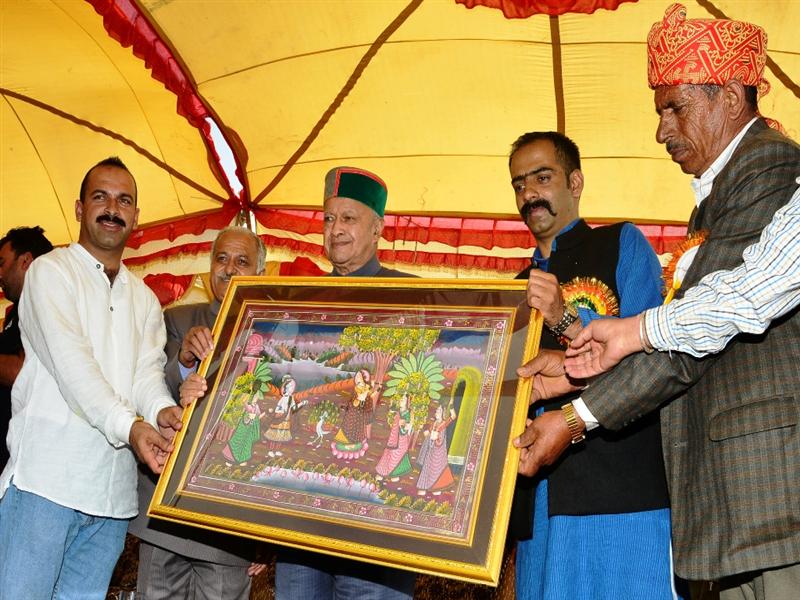 Chief Minister while speaking on the occasion of the local Fair Tikkar at Naldehra in Kasumpti constituency of district Shimla organized by Mela Committee Tikkar and Jan Jagriti Manch said that it was against our traditions to abandon the domestic animals particularly the cows, after utilizing them. Instead they should take care of their livestock and also properly feed them in spite of leaving them alone on their destiny. He said that the local community should come forward and spread awareness amongst the people about the same.

“Today we see cows wandering on the roads and streets and in crowded areas and there always exists risk of accidents and the children being attacked by the stray cattle.” said he, adding that it was ungrateful and against the rich culture and tradition of the Pradesh where Cow Worship was considered sacred. There is need to change our mind-set and aware the people, especially the younger generation about the same.

He said that the State Government was committed to open ‘Gau Sadans’ for such stray animals and was also providing assistance to those who had opened such shelters for the livestock. He exhorted the people to voluntarily come forward for providing shelter to stray cattle and not to desert them.

On the occasion the Chief Minister assured to provide assistance for setting up the ‘Gau Sadan’ in the area and also enhanced the Nazarana of the Nanal Devta Temple Committee to rupees one lakh and announced rupees 25 thousand for Tikkar Mela Committee.

The Chief Minister also announced a sum of rupees four lakh for constructiing Sarai Bhawan at Barog. He also announced up-gradation of Tikkar School from Middle to High and primary School Sonthal to Middle.

After announcing the up-gradation of the schools the Chief Minister said that it was not in good practice that there were no exams for the students from first to eighth class in the school and the performance of the children was being assessed from grading them by the school teachers itself. He said that the Government had taken a decision that from the very first in all Government school subjects like Maths, English and Hindi would be mandatory and said that the Government was also considering to start Punjabi and Urdu classes in Middle schools onwards provided a batch of more than 30 to 40 children were interested to take up the subjects and the teachers would be made available accordingly.

The Chief Minister also announced a PWD Rest House to be constructed between Mashobra and Baldehan.

While listing the development taken place in the State he said that despite financial assistance from Government of India from time to time the credit of the development activities to the people of the State who had contributed a lot in the carrying out developmental works and had voluntarily come forward for making Himachal the most developed state.

On the demand of opening ITI at Mashobra the Chief Minister said that the matter would be discussed with the concerned department regarding the same.

Pratap Singh Bajwa, President Punjab Pradesh Congress Committee was also present as a special guest on the occasion and was welcomed and honoured by MLA Anirudh Singh.