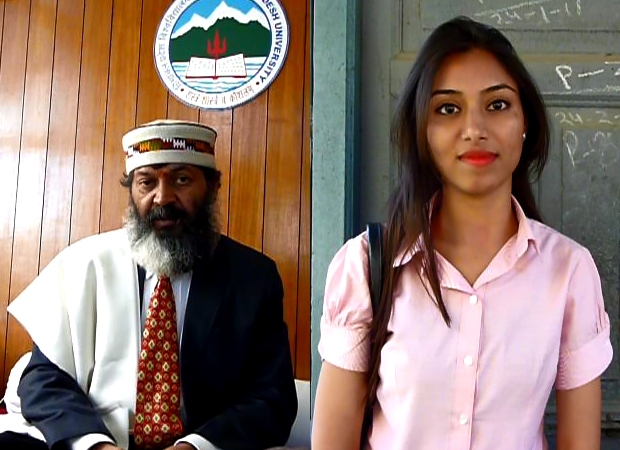 We would bring you the complete interview later, but first of all, we wish to highlight VC’s comments regarding the girl, Khushboo, who was manhandled and abused by the police. and the reply which she gave in response to his statement. Here is a video that contains the statements from both, Khusaboo and the VC. It’s a matter of great concern for us. The dignity and rights of a citizen were publicly crushed by HP Police. Most of us have already seen the evidences of how policemen behaved like drunk baboons with HPU students including research scholars.

If you don’t remember this girl, then do take a look at the videos and the pictures. She has handed over a written complaint to the Governor of Himachal, and also knocked the doors of ‘Mahila Ayog’. However, she haven’t received anything except assurances. Of course, she can’t go to the police officers, because this time the police is culprit itself. A lathicharge order does not empower any policemen to abuse, insult, and drag people from hair. The Vice Chancellor clearly denied to take any responsibility for the abuse and assault on this student of HPU. He puts all blame on the Govt. and HP Police. To remind you again, the police trashed and abused students after the VC gave a statement about feeling unsafe at the campus.

Four students are still in jail, denied bail by the court. All they dared to do was to protest against the anti-student policies including massive fee hike. The festival season for them is being spent behind the bars for taking a stand and speak of the unrest of the student community. Anger is erupting everywhere in Himachal. All colleges in Himachal witnessed student protests, hunger strikes, and arrests of protestors. The meritorious students, elected to form the SCA by the VC himself, slammed their resignation letter, clearly saying that they support the student protest and supported direct SCA elections.

Anyway, we appreciate the spirit of this girl. She did not try to conceal what happened with her. Rather, she raised her voice against her abusers- the HP Police itself. Try to consider the words, social support, fraternity, unity and justice instead of being just an onlooker and audience to the times when democracy is mocked at by Govt. and its machinery. It’s a great myth, an illusion that these students are political nuisance. They are grown up, educated, and free citizens of the state, thus, they are capable enough to make decisions and fight against the corrupt practices in the very institution they are enrolled. They aren’t school kids who must be dragged to classrooms to ensure they receive good grades. Student activism has brought revolution in many regions of the world. Drop all ready-made perceptions served to you by the traditional media and the Govt., take some time to sit and contemplate over the statements like India is a democratic state, that we are free citizens, we have right to speech or expressions or that public is the real ruler here.

Suffocated HPU students gather to protest, Over 70 arrested for violation of 144