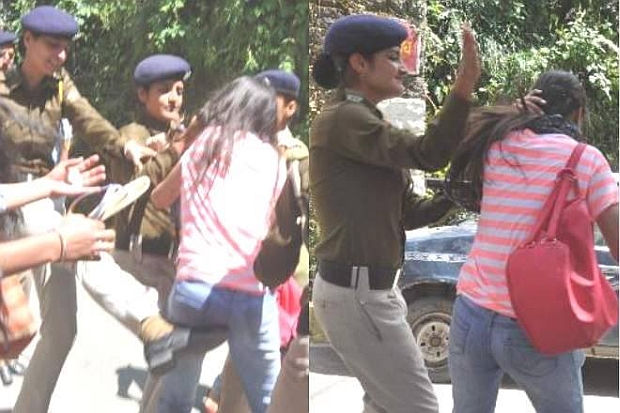 SHIMLA- Last night and following day, today was testing time for many HPU students. First the girls, who were sitting on chain hunger strike, were arrested at midnight along with other girls who were present with them. There was a lathicharge for which the only witnesses are the victims. Student leaders protested all day long, but they were arrested in the darkness of night only. Next morning, today, when the students came out on streets for mass arrest, they were not lathicharged, but trashed with such a brutality that witnesses shivered while they talked to us. Again, in afternoon, many students including research scholars were trashed by police. Near about 8-10 students sustained injuries including head injuries. A witness recited the horrible site of watching 10-15 policemen trashing arrested students inside the buses. Some of the readers even messaged us what they witnessed. Here is a message which we received from an eyewitness:

An eyewitness account of what happened today in HPU campus (cane charge on research scholars). More than 500 students from university library started their peaceful march towards Summerhill Chowk when they were stopped near Chemistry Department by police officials. We were told the police that we ready to be arrested (mass arrest). Several students sat on the road to contribute towards mass arrest. What happened after this would shatter you and eliminate any respect from your heart for HP Police and administration, if you have any. While students were sitting on the road, the police and QRT lathicharged them. None of the students counteracted (mark my words). Why they were lathicharged when they were sitting quietly? No one except DSP and SP knows about it. Then their attention turned towards a large group of around 350 students who were standing on the side. The police personals literally slapped the boys, cane charged the girls and spoke foul language against them. I saw some police personals giving ‘Gaalis’ to the girls. Even DSP was seen speaking foul words. Many girls were weeping but police kept on beating them. Girls were running for help, police chased them and beat them up. The drama went on for another 5 minutes where glasses of library were also broken and some of the students got injured in the process. HW also talked to ABVP members. The horror of police brutality reflected on their face while they talked about the gruesome site of brutal ‘lathicharge’ by police.

The intensity was so high that ABVP decided to join SFI and fight shoulder to shoulder against massive fee hikes and Govt. repressive actions. ABVP also staged a protest in front of DC Office, Shimla today afternoon. HW tried to contact many students leaders, but their phones were switched off because police snatched them to devoid them of making any communication. All of this happened after the VC cried of being assaulted by students, which is a completely false statement. HW had posted a video clip in the previous article. According to the statement of VC, he was assaulted as soon as he got out of his car. Please, take a look at the video, which shows that VC himself came out of the car and walked back under the cover of police security. Students had just blocked the road so that they could make him face their questions, which the VC wasn’t attending otherwise.

The Vice Chancellor’s statement says that he was pulled by hand and punched in the back. HW was there at the spot and saw all the action. It’s a characterless and cowardice act to use such a huge lie as an excuse to impose 144 in the campus and compel police to resort to gruesome lathicharge.

Deputy Mayor of Shimla, Tikender Panwar, on brutal lathicharge on students and fee hike at HPU

It’s a very sad day for a nation which acquired its freedom after many revolutionary lives were sacrificed. The Govt. machinery is used against those whom it should have protected. Take a look at the percentage of fee hikes at HPU and decide for yourself whether it’s anywhere near a justifiable decision? The best thing about HPU, for which it received appreciation from many other states was its low fees, so students were able to get equal opportunity to access Govt. educational institutes.

What kind of ridiculous proposal is it? The fees are hiked by 1500% and even 2000% in some cases. What’s wrong with protesting against a decision which will cast a very negative impact on major portion of public? The parent pay the fees and HPU authorities have imposed a huge burden on them in just one go.

Another reader sent us the following message:

Dear Admin
No TV channel highlighted this matter (HPU Campus). I don’t know the reasons behind this. As I belong to a low middle class family of HP, I know the value of money in Pahadi family. With low sources of income it’s really tough for parents to provide higher education, but still our parents move against all odds.

As we all know youth is the power of any nation, and it’s also my hearty desire to see strong, united youth of Himachal. I support the HPU students protest but to make this protest successful. Please stick with Kangra Mandi, Hamirpur constituencies also. Please try to highlight these news also.

We wonder why our Chief Minister, Virbhadra Singh, is silent on merciless repression of peaceful student protests? Why he isn’t bothered about the future of youth in the state? Why he isn’t moved by unrest among the students and their parents? How come he supported the proposal to hike fees by such high percentages?

HW is stunned by what it witnessed at HPU campus in last couple of days. We don’t claim ourselves journalists, but we do claim to have witnessed the real face of our own Govt. and our own police. We witnessed a conspiracy like we had seen in movies. The VC told a big lie, the newspapers and media published this lie and students were crushed for that. Some HPU officials filed their resignation by saying that they are not feeling safe and that they criticize the assault on the VC, which actually did not happened. It was made a legal point and good excuse to brutally trash and detain the students. However, it was a big mistake on the part of the VC, the Govt. and HP Police, especially Shimla SP and DSPs. Now, all student organizations have joined hands, people like the deputy mayor of Shimla, Tikender Panwar has come out against the Govt. and their hideous act of thrashing and arresting students at night, abusing, humiliating research scholars. All these student wanted was a relief from ridiculously hiked fees.

HW appeal to people to react and support thousands of students and their burdened parents in their fight against highly corrupt system. Let’s not tolerate, hence, encourage bullying attitude of our own Govt.

Unceasing unrest in HPU, who must take the batten and restore order?