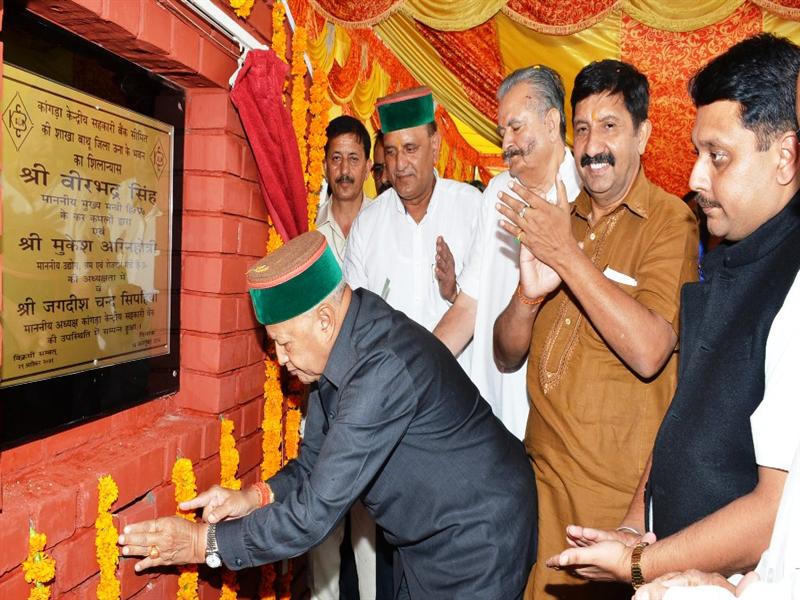 Chief Minister Virbhadra Singh while addressing a mammoth public meeting at Bathu in Haroli assembly segment of Una district today said that though many big industrial houses were coming up in the State but main-stay of the economy of the people comes from agriculture and similar allied sectors. As much of the population of the State was residing in villages, the people were more dependent upon cultivating crops said he adding that many were now in the business of producing off-season vegetables and fruits which yields them good profits. He said that the agriculture and animal husbandry sectors, which were the backbone of the economy of the hill people needs to be strengthened more.

Referring to Haroli assembly segment, the Chief Minister said that it has witnessed massive development due to hard-work of its MLA. “It is not like the development was being carried out in Haroli alone but the Government was equally concerned about all the regions of the State”, he said adding our State should be cited elsewhere as a new model of development in the country.

He said that much more is required to be done in the field of development and the participation and co-operation of the people is must. It is wrong to say that the State Government was giving added attention to the Haroli as being claimed by the opposition, he said adding that the Government was endeavouring to equally develop all regions of the State irrespective of region and religion.

“We don’t create divide amongst the people on the issues of development” he added and cautioned few bent upon to carve up the differences and misguide the people.

He said that development in Una was due to successive congress policies in their regimes. More projects were coming up in the State and the Government had taken up the major Swan River project and will finish the work successfully in a time bound manner. He said that all 73 tributaries of the Swan were also being channelized. “In India, Swan was only such a project where not only the main river but also the tributaries of the main river were also being channelized”, he said.

Later, the Chief Minister inaugurated Rs. 27 crore, 132 KV Sub-Station at Bathu which will improve the low voltage problem of the area and also the transmission and distribution losses would be reduced to the minimum. Not only this, the industrial belts of Tahliwal and Santoshgarh, Gurplah, Gondpur, Pubowal, Kuthar, Dulehar, Laleri and in the periphery would be benefited from this. Besides, as many as 25360 domestic, commercial and agricultural consumers of the area will also reap its benefits, added he.

Earlier, the Chief Minister performed the foundation stone laying ceremony of the 33 KV Electricity Sub-Centre at Bathu to be constructed at a cost of Eight crore which will benefit Eight Panchayats of the area with a population of around 8600. He directed the authorities to complete the work of the substation within a year.

He also performed the ‘Bhoomi Poojan’ of improvement and strengthening of Rs 17.50 crore Bankhandi-Jhalera Road, from Punjab border at Santoshgarh to Una.

The Chief Minister announced the office of Sub Divisional Police Officer at Haroli and said that the matter for setting up Electrical division at Haroli would be taken care of after consulting the concerned Minister. The Chief Minister also agreed in-principle for opening tourism Hotel at Una. He announced setting up of Primary Health Centre at Palakwah and up-gradation of Ispur Ayurveda Hospital’s bed capacity from 10 to 20. He also announced to open an Auditorium at Haroli.

Mukesh Agnihotri, Industries Minister while thanking the Chief Minister for dedicating the works worth more than 50 crores in the Haroli constituency and also thanked the MPP and Agriculture Minister for gracing the occasion and for 133 KV and 33 KV sub stations at Bathu in Haroli.

Taking a jibe over the statements of the opposition the Minister said that the BJP had started criticizing the Chief Ministers tour of the area and at last have started analyzing and realizing that development worth crores was taking place in Haroli. He said that it was wrong on the part of the opposition to air the rumours and terming the developments works as “Nautanki’(Drama). Referring to the opposition, he said that why not they took over the charge of the development of the Una district during their tenure? He said that Rs 15.15 crore Ajoli- Laluwal road was under construction and also the 922.48 crore Swan Channelisation project was underway.

Besides, IIIT, number of bridges, Health and Education Institutes in the area were enough to make the opposition realize that equal development was being ensured in all constituencies of the district. He said that Industry worth Rs. 300 crore in Amb in Una district was also coming up soon.

He placed the local demands of the area and listed the development activities in Una district.

Sh Rakesh Kalia, Secretary, All India Congress Committee, while welcoming the Chief Minister thanked him for undertaking Daulatpur College in Government sector and also appreciated the efforts of Industries Minister for making his constituency a Model of development.

Dr. Simi Agnihotri honoured the Chief Minister and other distinguished guests present on the occasion.

Earlier, Smt Surekha Rana, Pradhan Gram Panchayat Bathu and President District Mahila Congress thanked the Chief Minister for dedicating 132 KV electric Sub Station and said that the low voltage problem of the area would be solved and also placed the local demands of the area on the occasion.