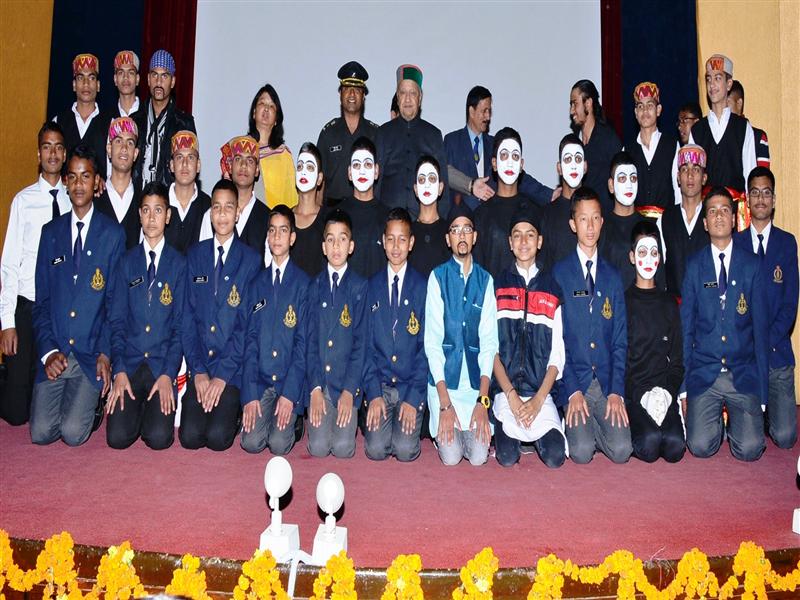 The Government would make available whatever extra land was required by the Military School at Chail in district Solan for expansion of its campus, however, the Chail Cricket Ground would remain with the State Government, said Chief Minister Shri Virbhadra Singh on the sidelines of the Annual Day Function of Rashtriya Military School (RMS) at Chail today.

He said that the Government would also look into the matter of taking out the Chail Bazar and its surroundings from the forest area so that it could be developed into township for benefitting the people at large.

Earlier, while speaking on the 89th Annual Day function of RMS, the Chief Minster said that the cadets must keep in mind that in today’s highly competitive world, competence matters more than anything else. The students must tone up their thinking and communication skills and should show single-minded devotion to studies without loosing sight of their aim.

While trying to keep up the time-honoured tradition, the School had made bold forays into the contemporary teaching profession and adopted cutting edge technology like class-room automation and language lab to bring about a qualitative improvement in the teaching-learning process, along with strict insistence on discipline, aimed at helping the cadets grow mentally, emotionally and ethically in the finest tradition of public school education. said the Chief Minister adding that it is small wonder that this school had been recognized as one of the best boarding schools in this part of the country.

Shri Virbhadra Singh said that Rashtriya Military School, Chail had a long cherished history and high traditions and great many of the cadets had walked out of its hallowed portals to occupy high echelons of service in the armed forces and other walks of life.

The Chief Minister said that the number of prizes and glittering trophies that the cadets were awarded today in recognition of their achievements clearly points to the commitment of the school, which was well-supported by the aspirations of the parents of the children.

“I am greatly elated to witness the cultural show and the one Act Comedy which is a delightful display of your creative abilities and aesthetic standards” said the Chief Minster adding that painstaking effort that was put to nurture and bring out the latent abilities of the cadets was praiseworthy.

The Chief Minster also visited an educative and enlightening exhibition which displayed the Scientific Models, woodwork and paintings of the students.

He also distributed prizes to the students who excelled tin academics and other co-curricular activities.

Cadet Shivam Singh, the school Captain was adjudged as the best cadet of the school, besides Nalanda House was declared as the Champion house follwed by Ujjain house as the runner-up

Earlier, Principal of the School Lt. Col Vineet Ohri welcomed the Chief Minister and placed annual report of the school before the assembly and also the feat the cadets had achieved.

P.Sonn proposed vote of thanks.