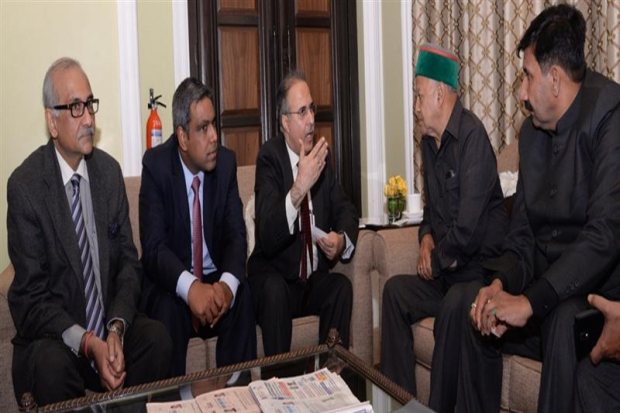 State Government proposes to make Himachal Pradesh an ideal destination for the entrepreneurs and we have envisioned transforming the State as the most preferred destination in the country for the entrepreneurs and at the same time we expect co-ordination from the industrialists and we also seek their participation to make Himachal Pradesh a favourite industrial hub, said Chief Minister,Virbhadra Singh while interacting with big business houses at Mumbai in Maharashtra today.

He said that the State electricity regulator had already announced freezing of the power tariff upto 2018 at one fixed rate, adding that the rates of power in HP were 20 to 30 percent lower than bordering States in Northern India.

“I foresee and I hope that meet would be a platform and an opening avenue for the big business houses to invest in the State” he said speaking during one to one interaction meet with entrepreneurs at Mumbai today.

The Government proposes to invite big industrial houses as to invest in the State and foreseeing the vast potential for the entrepreneurs by assuring ease of business, quality and reliable power, proactive and investor friendly administration besides attractive sector specific facilities. As far as power is concerned, Himachal is a Power State and instead we want to give uninterrupted power to the industrial houses in the State, he said while talking to the entrepreneurs..

Those who interacted with the Chief Minster were the TATA Company limited proposed to invest in Hydro-Power Sector in a big way and proposed to set up five to six projects and that to within a given time period. They also proposed the introduction of cable cars and ropeways in the State.

Mr Arun Nanda, Chairman and Director Mahindra & Mahindra while interacting in one to one meet proposed setting up Arts and crafts village and expanding resorts in lower belt of Himachal Pradesh for boosting tourism and setting up International educational institutes. He said that Mahindra & Mahindra have purchased their own land in Himachal and if the Government steps ahead to extend help in providing land to them at Dharamsala in Kangra District.

Mr. Apurva Parekh, Executive Director Pidlite, which at present is a major investor in the State intends to invest/expand its manufacturing facilities with an additional investment. The Chief Minister assured to extend help in whatever possible manner.

Mr. Manoj from Amarson limited and Meridian Group offered an investment of rupees 600-700 crore with interest-area in Solar and Bio Mass energy using obnoxious weed lantana and Pine needles for generating electricity and planning 10 MW Solar Energy project in the State immediately and a introducing House Boats in Pong besides Bird Culture towers on their own private land.

The Chief Minister welcomed their initiative said that the Government was paying for removal of lantana at Rs. 10 per quintal or so and there was no dearth of lantana which will also provide indirect employment to the local people. To start with they offered to produce 250 KW of Bio Mass energy project.

The Chief Minister also welcomed the Proposal of opening Medical Colleges in private sector in the State by DY Patil Group which at present were having as many 230 medical college in the Country and the World.

The investors who gathered appreciated the decision of the Government for holding such type of meet for the first time and evinced interest keen interest to invest in the State. Few Pharma companies also approached for expansion and investments in the State.

More companies as Glenmark, Hindustan Levers, United Phosphorous Limited, (UPL), HI Tech India Private Ltd besides, many other small and big business houses interacted with the Chief Minister and proposed to invest in the State.