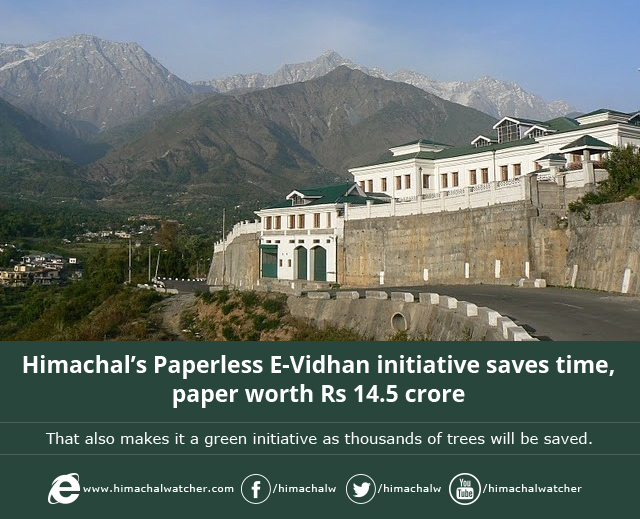 SHIMLA:The Vidhan Sabha’s initiative to launch e-vidhan project to make the Assembly’s proceedings paperless has helped the state save paper worth Rs 14.5 crore. It also won accolades from the Centre which has included the project among three pioneer projects to be implemented by National Informatics Centre Services Incorporated (NICSI) to be replicated by other states.

“Several other states have evinced keen interest in implementing the Himachal’s e-vidhan model and during the recent conference of Speakers where I cleared their doubts. The IT Department has included it in three projects of the NICSI, along with Adhaar-Enabled Biometric Attendance Scheme, and Jeevan Pramaan for digital life certificates to pensioners”, Speaker BBL Butail said here today.

Butail said the Rs 8.12 crore project had been implemented and against anticipated saving of Rs 15-crore on paper, the actual saving was Rs 14.5 crore, which was commendable.

The project is a part of green initiative as thousands of trees will be saved and hassles from the movement of files from the Secretariat to the Vidhan Sabha during the sessions will be removed.
The Budget session, commencing on March 11, will be paperless and the copies of Budget documents and the Governor’s address will be made available online and hopefully all concerned, including ministers, MLAs, media and officials, would shift to online system, he added.

Butail said if all state assemblies and Parliament go online and eliminate paper, the saving would be in thousands of crores and lakhs of trees would be saved from getting axed, contributing to green initiatives.
The project would also be implemented in the Dharmasala complex of the Vidhan Sabha and Rs 8-crore project had been sent to the Centre for the approval, Butail said, adding that members had started sending the questions online and the departments were also sending the replies through e-vidhan system.

The Vidhan Sabha Secretariat had received 455 questions, 381 starred and 74 unstarred and 99 questions had been received online, he said, adding that the Budget would be presented on March 18 and passed on March 31 and there would be no recess during the session

The Speaker said the decision on the petition of BJP members for disqualification of four Independents under the anti-defection law would be announced soon. “I have recorded the statements of the Independent MLAs and now the statement of the petitioners will be recorded after which the decision will be announced,” he said.
Butail said the Union Government had also sanctioned a solar energy project for the Vidhan Sabha and HIMURJA had already started implementation of the project. Two floors of the Vidhan Sabha had been connected to the solar energy system and the streetlights would also be operated through solar energy, resulting in saving of Rs 1 lakh to Rs 1.5 lakh per month, he added.