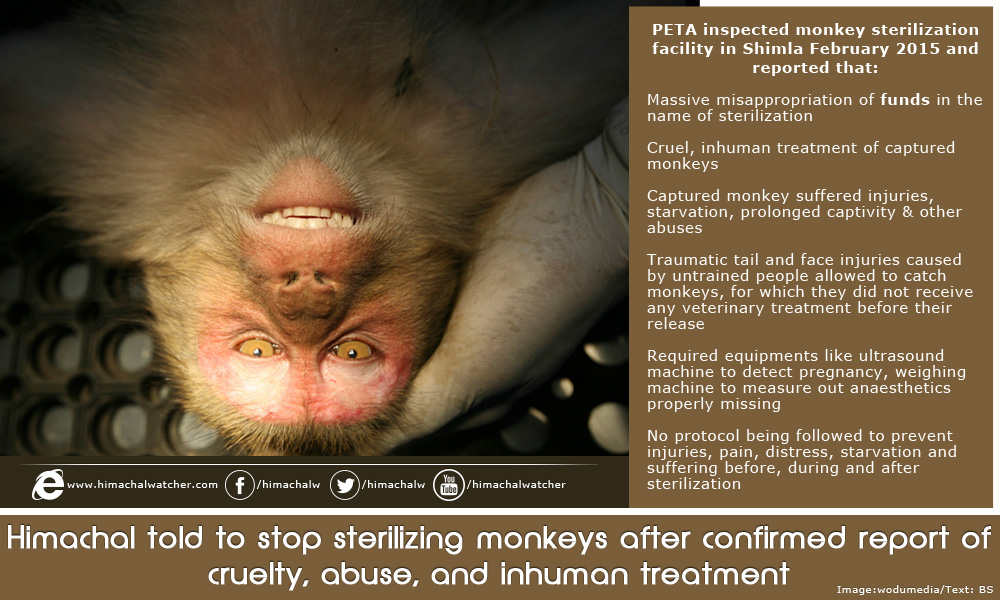 SHIMLA: The Animal Welfare Board of India has asked Himachal Pradesh to stop its monkey sterilization programme till it ensures humane treatment of the primitives, an animal rights activist said on Thursday.

The Animal Welfare Board of India (AWBI), which operates under the Ministry of Environment and Forests, has recommended to the state government that the monkey sterilization centres be shut down until the state forest department followed protocol, People for the Ethical Treatment of Animals (PETA) India said in a statement.

“Sterilization is the most humane way to control the monkey population, but not if it’s being done in a cruel way,” the statement quoting PETA director of veterinary affairs Manilal Valliyate said.

“PETA is calling on the forest department to impose strict protocols that will protect monkeys from injuries, pain, distress, starvation and suffering before, during and after sterilization,” Valliyate said.

As per the state wildlife wing, a total of 94,334 monkeys have been sterilized since 2007. It has set up seven sterilization centres, each with an annual capacity of 5,000 surgeries. Two more centres are in the pipeline.

A team comprising functionaries of the Lala Lajpat Rai University of Veterinary and Animal Sciences in Hisar in Haryana, the AWBI, the People For Animals (PFA) and PETA inspected the monkey sterilization facility in Shimla on February 27 and 28 and found that no written standard operating procedures were in place.

The team in its report said the captured monkey often suffered injuries, starvation, prolonged captivity and other abuses.

AWBI assistant secretary S. Vinodkumaar has urged the central and the state governments to take immediate action to comply with the requirements.

The monkeys at the monkey sterilization centres are captured by untrained individuals who hand the animals over to the facility for a monetary reward and many animals were seen suffering from traumatic tail and face injuries, for which they did not receive any veterinary treatment before their release, said the report.

The facility also operates on pregnant monkeys in the absence of an ultrasound machine to detect pregnancy and does not have a weighing machine to measure out anaesthetics properly, it said.

PFA national trustee Gauri Maulekhi told IANS over phone from Delhi that 29,038 monkeys were captured and 24,751 were sterilized between 2007 and 2014 at Shimla centre.

She said 4,557 (or 16 percent) out of the total sterilized monkeys were unfit as they were found to be either pregnant or already sterilised. “There is a noticeable change in behaviour of the sterilized monkeys due to opting unscientific techniques.”

Maulekhi, who was also part of team that visited the monkey sterilization centre in Shimla, also expressed doubts over the funds allocated for the programme.

“There seems to be massive misappropriation of funds in the name of sterilization. A thorough audit of the funds should be done by a central agency,” she added.

The monkey menace in Himachal Pradesh has also been raised several times in the budget session that concluded this month.

Chief Minister Virbhadra Singh informed the house: “Over the past few months, we have regularly urged the central government to allow export of monkeys and to declare them as vermin.”

Despite the high court order in January 2011 putting on hold the state’s decision to allow farmers to shoot monkeys, he admitted “culling is the most effective method to control monkey population”.

“Sterilization is the second best solution. We are seeking advice from experts how to meet this challenge,” he added.

After Sarva Shiksha Abhiyan failure, Another failure of HP Govt. in Education