Hindi Divas in observed on September 14 every year to propagate the language and its cultural heritage of India. On the occasion of Hindi Divas, like educational institutes in most of the Hindi speaking states, St. Bede’s College celebrated it with an event organized on September 14, 2015.

The students participated in an inter-ship competition that included declamation and poetry recitation based on the topic “Hindi Mera Maan, Hindi Mera Abhiman.” Students also presented a short skit based on Hindi idioms. Various speakers including Shilpa Bhatia, the Hindi editor, Abhilasha Dhiman, and judges Mrs. Anjali Wadhwan and Mrs. Alka Verma emphasized on the importance of Hindi as our national language. A concern was expressed over gradual loss of identity for Hindi language as English gains popularity in India.

The students and teachers took a pledge to promote Hindi by using it in their day to day interaction.

Similarly, the government departments and other institutes did as they were directed by the government. While, it may sound odd to hear that students sang bhajans at St. Bede’s college to begin with the program, it’s also true that a section of Indians were not convinced with the idea of forceful propagation of one language over others. 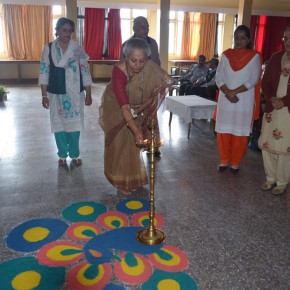 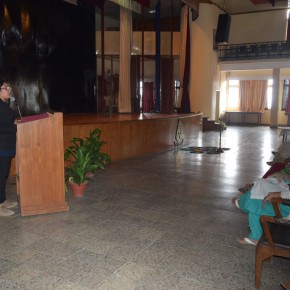 As a matter of fact, Hindi is a native language for 258 million people, and is world’s 4th largest language. In Indian history, the Constituent Assembly of India had adopted Hindi written in Devanagari script as the official language of the Republic of India on September 14 in 1949. The roots of Hindi language stem from Sanskrit language, nearly back to 5,000 BC. The name Hindi is derived from the word Hind, the land of the Indus River. The event concluded with awarding the winners of the competitions.

The results of the Internship Competitions are as follows:

Breaking the taboo about menstruation through propagation of scientific view point