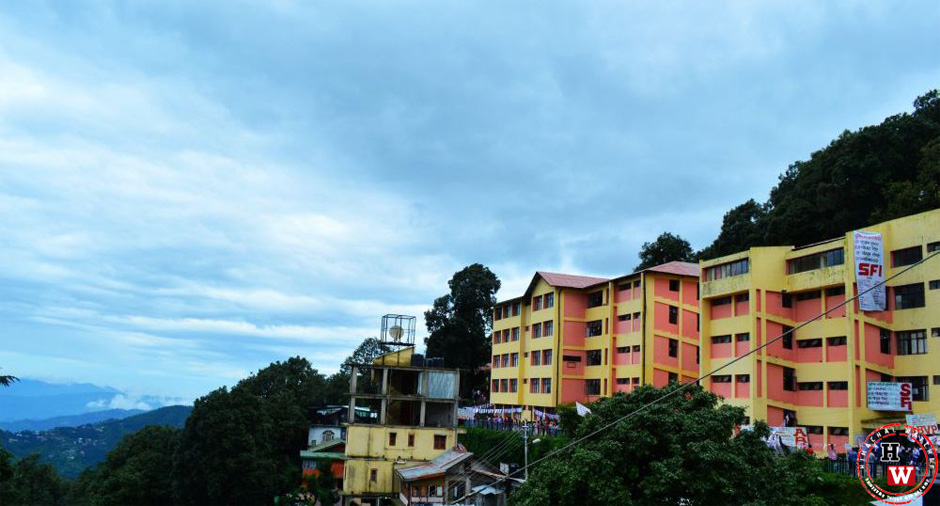 SHIMLA- Student chain hunger strike has entered into 13th day, but instead of attending to the students, the administration seems to be more interested in oppressing the protest despite apparent failures of HP University administration in implementation of RUSA and against massive, unjustified fee hikes.

Today, in a meeting held at HP University under the Chairmanship of Vice-Chancellor Prof. ADN Bajpai, administration discussed the demands mentioned in the Memorandum. On the demand of rollback of RUSA after the university failed to implement it properly and caused huge inconvenience to students, the VC said the demand cannot be considered. Regarding the delay in result, he threw another assurance saying the issue will be seriously addressed to in future. On massive fee hikes, the students were asked to submit their proposal.

The VC also declined attending the demand regarding revoking ban on students election and revoking of expulsion of seven students. Regarding the vacant positions of teaching and non-teaching employees, again like always, he claimed that the process is already underway. It was also informed that money has already sanctioned for the purchase of new buses for day scholars.

Although, the condition of hostels and infrastructure is very poor, the VC claimed the administration is serious about the upkeep and maintenance of hostels, playground and the demand for indoor sports complex. Further, more assurances were made, like the cleanliness work has already been outsourced to Sulabh International, that the condition of University Gym will be improved and equipment will be provided as early as possible, possibility of providing M.I Rooms in girls’ hostels will be explored, sanction of money for smart class rooms for all the departments. The VC claimed that some departments already have library facility and the process will soon be initiated to provide this facility in rest of the departments. As per him, the demand for public toilets has been fulfilled.

Further, he emphasized on the need of oppressing student protest, especially the chain hunger strike by 21st April, 2016 on or before 5:00 PM. The meeting was attended by the Dean of Studies, Registrar, SCA President(HPU Campus), Representatives of ABVP, NSUI and SFI. In brief, none of the major demands were attended and the conclusion was mostly about assurances.

It’s very unfortunate that student community of Himachal had been continuously protesting for very genuine demands for past two years. However, their protests were brutally crushed on multiple occasions using police force. Now, again, the VC is more concerned about sending notices to students sitting on chain strike. Sadly, student activism is also dying in this hunt to discourage student politics, which is certainly not a good news for student community.

Fire break out in Vikasnagar engulfs apartment, but locals saves the day for locality