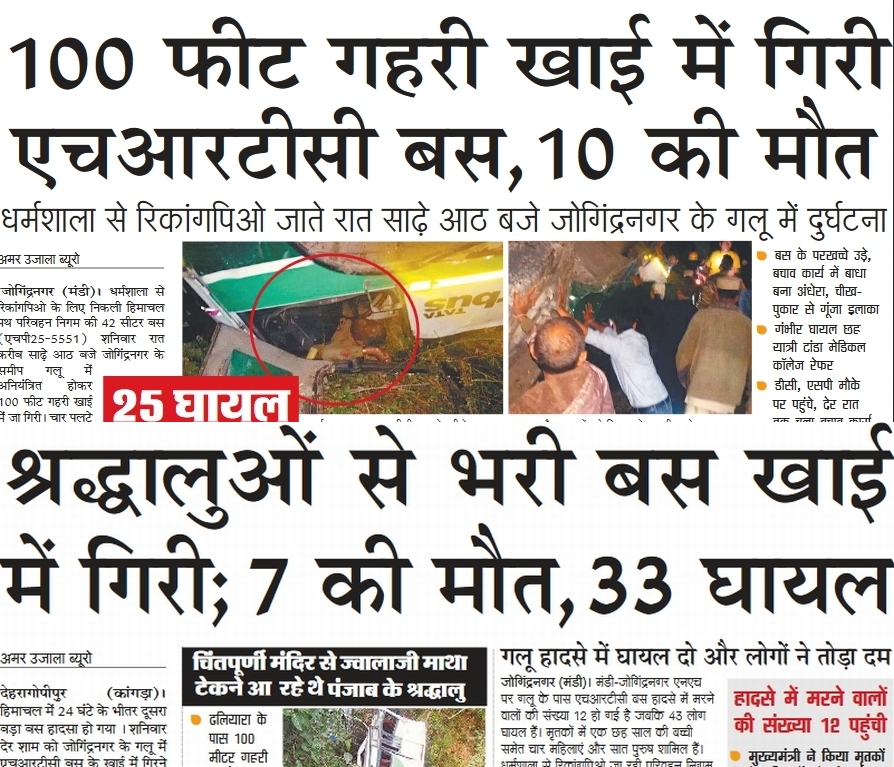 SHIMLA-As many as 22 people were killed and around 78 injured in two road accidents in Mandi and Kangra districts of Himachal Pradesh in the past 24 hours. The victims included tourists from Punjab, West Bengal and Himachal Pradesh.

Twelve people died at Golu near Jogindernagar in Mandi district Saturday night when a Reckong Peo-bound Himachal Road Transport Corporation (HRTC) bus skidded off the road and plunged into a 100-metre deep gorge.

According to reports, the driver, who was also killed in the accident, was attempting to overtake another bus.

Eyewitnesses said the other bus signalled to Krishan Chand, the HRTC driver, to overtake it. However, since optical fibre cables were being installed in that portion of the road, it was unstable. Chand realised it too late and skidded off the road,

a police sources said quoting a passenger. Other passengers said the bus was being rashly driven.

Forty-four people were also injured in the accident and later shifted to three government hospitals in Mandi and Kangra districts. The condition of six was reported to be critical.

Vivek Chandel, Additional District Magistrate (ADM) Mandi, who was overseeing the rescue and relief operations, said that barring one, all other deceased had been identified. Five among the dead were members of a family from West Bengal. He added that interim relief has been given to the next of kin of all local victims. Deputy Commissioner Mandi Sandeep Kadam said he had ordered a magisterial probe into the accident.

In the second accident, 10 persons died, four of them on the spot, when a private tourist bus from Amritsar, on its way to Jawalaji shrine, skidded off the road near Dalyara and plunged into a gorge.

The accident happened at around 2.30 pm. There were 40 passengers on the bus. There were 17 women, three children. The driver failed to negotiate a sharp curve and lost control of the vehicle,

He said seven persons who had died were identified and their families in Amritsar were being notified. All the injured have been shifted to Dr Rajendra Prasad Medical College hospital.

Himachal Chief Minister Virbhadra Singh visited the hospital and directed authorities to provide free treatment. He also announced compensation of Rs 5 lakh each to the next of kin of those who died in the accidents.