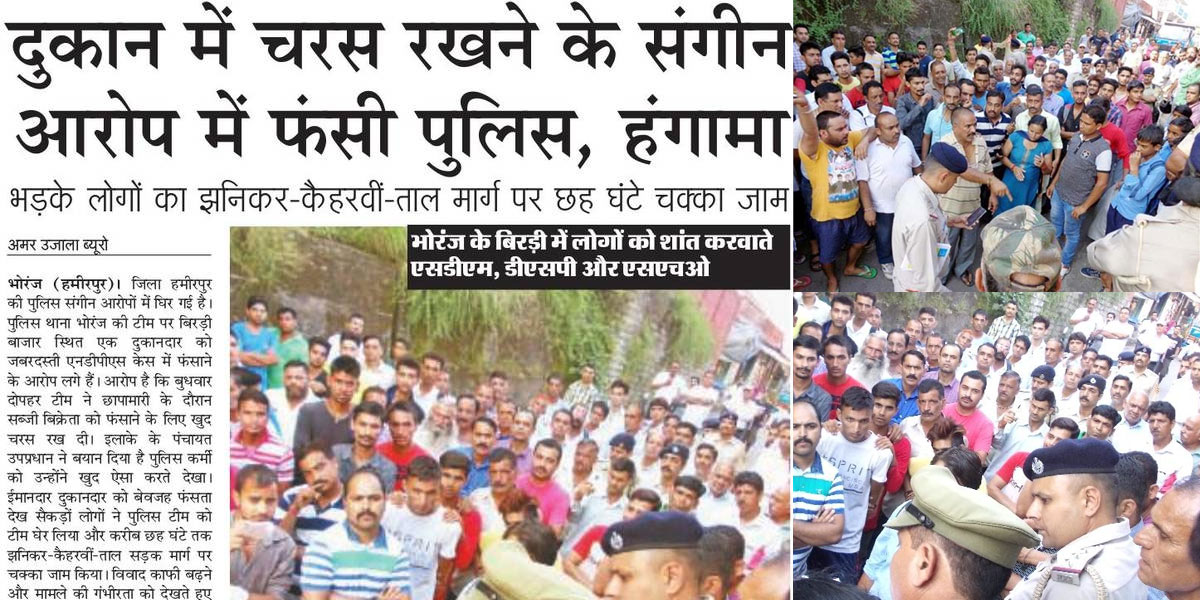 Hamirpur- Image and trust of people in Himachal Pradesh Police Department is at stake after people busted policeman allegedly planting ‘Charas’ (cannabis) in a vegetable shop in district Hamirpur during a raid, and then attempting to frame a fake  case under Narcotic Drugs and Psychotropic Substances Act(NDPS) against the owner. However, this alleged, grave attempt of police was exposed after eyewitnesses came ahead and confirmed watching one of the policeman planting the packet in vegetables rack, which later it claimed to have recovered from the shop. Angry mob surrounded the police team and blocked the road for about three hours, and opened it only after higher officials arrived at the scene and assured fair inquiry into the matter. 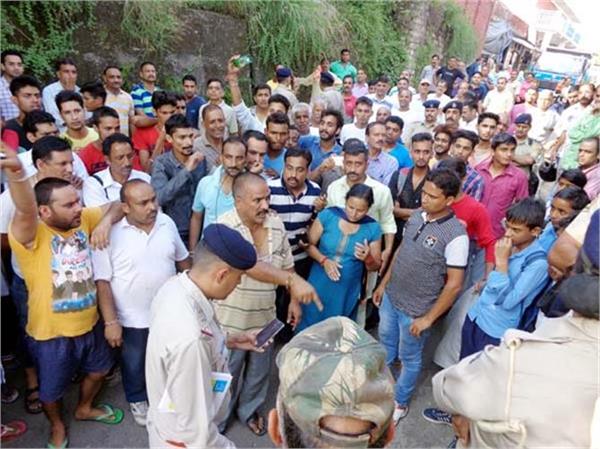 Reportedly, Rakesh Kumar, a resident of Birdi- Baloh in Hamirpur district of Himachal Pradesh, runs a meat and vegetable shop from past many years. His wife also assists him and take care of vegetable shop. On Wednesday afternoon, a team comprising of half a dozen policemen headed by ASI Bhoranj Police Station Avtar Singh raided the meat and vegetable shop. The team searched both shops but did not find anything, said reports. Meanwhile, one of the policemen allegedly planted a small packet in vegetables rack, and then claimed to have found it hidden there. However, the Up-Pradhan(उपप्रधान) of the local panchayat, Rakesh Singh, who was asked by the police to accompany the team during the raid, saw the entire incident.

Reportedly, the police team at once pounced on the shopkeeper, started beating him, and tried to detain him. However, eyewitnesses including the Up-Pradhan resisted this attempt of police. Angry people gathered and blocked the road to save the shopkeeper whom they claimed innocent.

Considering the growing mob of angry locals, the SDM Bhoranj SK Parashar, Tehsildar Sanjay Kumar, DSP Ashok Verma, and SHO Mukesh arrived at the scene. The mob opened the road only after the SDM assured of inquiry into the matter. The statements of main eyewitness, Up-Pradhan, and others have been recorded, informed the SDM.

The people and panchayat representatives demanded that the inquiry into this matter should not be conducted by Bhoranj Police.

DSP Ashok also assured people of a departmental inquiry against the accused ASI.

Stunned locals including panchayat members, expressing their concern, said that the police had almost framed and destroyed life of an innocent person if it were not for the eyewitnesses.

Up-Pradhan of local Keherwin panchayat said he was asked by police to accompany him in a raid on the mentioned shop. When the police didn’t find anything, the police allegedly said “Aaj Case to Banta Hai”. Meanwhile one of the policemen quietly placed a small packet under vegetables. Then the ASI pretended to have recovered it from the shop and started beating the shopkeeper and tried to put him into police vehicle, he stated.

However, on hearing the brawl other shopkeepers along with locals surrounded the police team and blocked the road until higher officials arrived at the scene and assured inquiry and action against culprits, if proved guilty.

Shimla Modern Children Home worth Rs. 8 crore to be completed by June 2017: CM