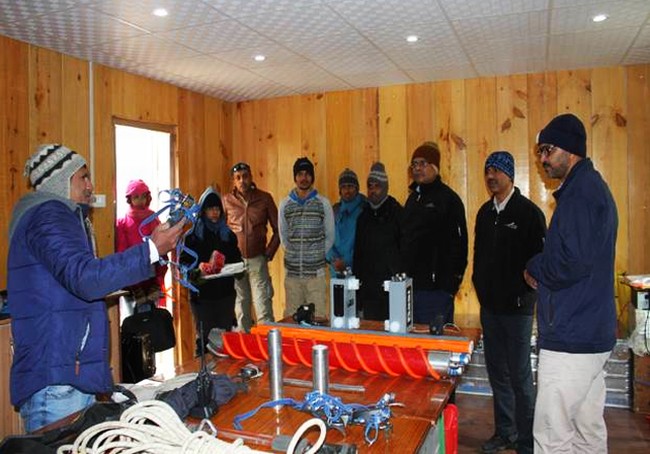 SHIMLA- Indian Government has established “Himansh” research station in a remote village of Spiti valley located at an altitude of above 13,500 ft (over 4000 m) in the state of Himachal Pradesh to facilitate better study and quantification of the Himalayan glacier responses towards the climate change. The station will also work as a base for undertaking surveys using Terrestrial Laser Scanners (TLS) and Unmanned Aerial.

The research facility was established by the National Centre for Antarctic and Ocean Research (NCAOR), Goa, under the Ministry of Earth Sciences at a remote region in Spiti, Himachal Pradesh.

As a matter of fact, a few days ago, in a study conducted by State Centre on Climate Change of the State Council for Science Technology & Environment has warned Himachal Pradesh regarding devastating floods or Glacial Lake Outburst Flood (GLOF) as melting of glaciers is causing formation of more lakes. Outburst of these lakes could unleash massive amount of water leading to floods.

Read: Himachal at high risk of floods due rise in number of Supra glacial lakes formed by melting snow: Study

According to According to the studies carried out by the Centre, number of such lakes in Satluj basin has increased from 38 in 1993-94 to 390 in 2015. The Centre had also advised the government to properly monitor the glaciers and changes in them due to climate change.

Purpose of Research Station and Equipments

The station is equipped with many instruments to quantify the glacier melting and its relation to changing climate. These include Automatic Weather Stations for weather monitoring, water level recorder for quantifying the glacier melt, ground penetrating radar to know the thickness of glaciers, geodetic GPS systems to study the glacier movements, snow fork for studying snow thickness, steam drill, snow corer, temperature profilers, as well as various glaciological tools. Further, the researchers would be using this as a base for undertaking surveys using Terrestrial Laser Scanners (TLS) and Unmanned Aerial Vehicles (UAV) that would digitize the glacier motion and snow cover variations with exceptional precision.

NCAOR expect that initiative would contribute to the integrated study the glaciers in the upper Indus basin (Chandra basin) in Himachal and their contribution to discharge.

Why Is It Necessary to Monitor Glaciers?

Himalayan region has the largest concentration of glaciers outside the polar caps, as this region is aptly called the “Water Tower of Asia” is the source of the 10 major river systems that provide irrigation, power and drinking water for over 700 million people live in India, Pakistan and Bangladesh– nearly 10% of the world’s population. Understanding the behaviour of these glaciers and their contribution to the sustainable supply of water for mankind and agriculture is one of the grand challenges of Indian scientific community.

According to the UN data, the contribution of snow/glacier melt in annual stream runoff is substantially higher (more than 40%) in Indus basin as compared to Ganga and Brahmaputra basins (less than 10%). Therefore, understanding the glacier mass balance and their contribution to the Indus River is more critical than other basins towards the understanding on the impact of glacier retreat on the water cycle in the northern India and Pakistan.

Some of the bench mark glaciers that are already being studied under this project include Bada Shigri, Samudra Tapu, Sutri Dhaka, Batal, Gepang Gath and Kunzam. An integrated study using glaciological, geodetic, glacio-hydrological methods will shed light on the glacier response to the changing climate in this region and will also quantify the contribution from glacial melt water to the river discharge in Indus basin. “Himansh” will provide the much needed fillip to the scientific research on Himalayan glaciers and its hydrological contribution.

The station was unveiled by Dr. M. Rajeevan, Secretary to the Ministry of Earth Sciences, Govt of India, on Sunday October 9, 2016, in presence of Dr. M. Ravichandran, Director of National Centre for Antarctic and Ocean Research.