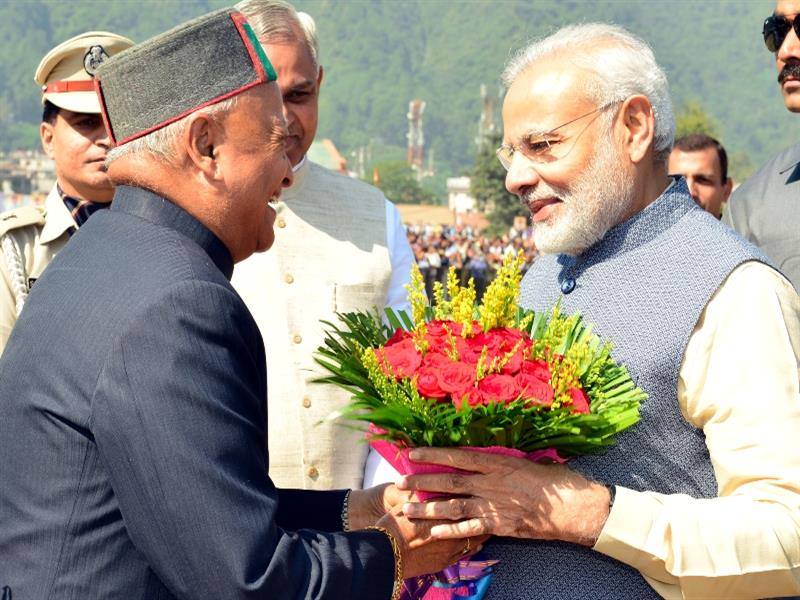 Chief Minister Virbhadra Singh, who was present to receive the PM, submitted a detailed memorandum regarding various issues of Himachal Pradesh.

HP Govt. requested a compensation grant of at least Rs. 1000 crore per annum to Himachal Pradesh for immensely valuable environmental and ecological services rendered by imposing ban of green felling and preserving the forests in the Hill States.

Speedy environmental clearance for construction of hydel projects was also requested. The memorandum said that Himachal fulfills the criteria of having forest area more than 33% of total geographical area, fixed by Environment Ministry, Govt. of India, whereas HP has 66.5% of its area classified as forest.

Therefore, said the memorandum, Ministry of Environment, Forest, GoI should speedily clear all forest diversion cases for Hydel Projects which are pending in the Ministry of Environment& Forest, GoI due to insistence of the Ministry to make available non-forest land to carry out the Compensatory Afforestation which is not available in Himachal Pradesh since Himachal Pradesh already meets the Govt. of India criteria.

Shimla is one of the very few State Capitals without air connectivity. The Prime Minister was requested to direct the Ministry of Civil Aviation and other concerned organizations to ensure resumption of commercial flights to and from Shimla airport.

The memorandum also requested the centre to grant more powers to the State government to make it easier to divert forest land projects like Roads, Water, Irrigation and Hydel Projects from 1 hectare to 10 hectares.

Include Cannabis Removal and Other Activities under MGNREGS

Online shopping in Himachal to be costlier as Govt. mulls over imposing 5% entry tax on online sales

Himachal selected as ‘Best Big State’ in field of education, to be rewarded in New Delhi: CM