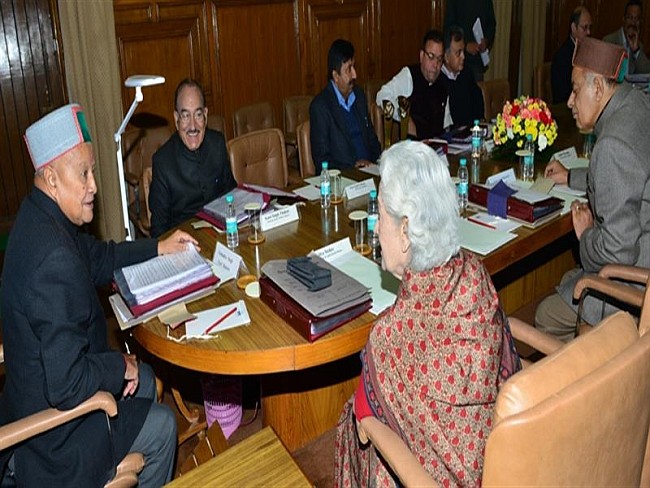 SHIMLA- In the Cabinet meeting, chaired the Chief Minister Virbhadra Singh, held on Thursday, various decision were taken by the Himachal Pradesh Government including announcement of schemes, posts to be filled, amendments etc.

In order to bring back to deteriorating education quality in Himachal’s government schools and improve the results, Govt. approved and launched “Mukhya Mantri Shikshak Samman Yojana” in the State. The Govt. believes that the Scheme would motivate teachers (TGT/PGT/Headmasters/Principals) to deliver better overall results, particularly in subjects like Maths, Science and English etc. The teacher will be awarded with incentives and offers of extension of service on achieving 100 percent results.

It was stated that one year extension would be given to the teachers who will consistently give 100 percent results in Board Examinations for a period of five years.

Cabinet also gave approval to introduce Education as a new subject at Under Graduate level in Government Degree Colleges for 2017-18. The subject will be introduced only in institutes with student strength of four thousand or more. The objective, the Cabinet claimed, is to prepare students for admission in various examinations.

It was decided that the winter session of State Legislative will be held at Dharamsala from 19 to December 23, 2016.

‘Chief Minister’s Start-up/innovation Projects/ New Industries’ Scheme was also launched.  Government claimed it to be an attempt to create self-employment and for up-grading the skill of entrepreneurs besides providing them all support including professional guidance etc. Govt. claimed that the scheme aims at helping and hand-holding entrepreneurs to select viable projects in the potential areas in manufacturing and service sectors and train them to set up start-ups and subsequently manage and run their enterprises professionally.

On the analogy of various States like Haryana, Bihar, Assam etc., the Cabinet decided to levy administrative and contingency charges @ 9 percent for Central Government Ministries and various Public Sectors Units including National Highway Authority of India, Railways and Ministry of Defense etc for initiating several land acquisition proceedings in the State.

It also gave its nod to create PWD-C section in H.P. Secretariat along with requisite staff.

Decision was taken to open Veterinary Dispensary at village Ruwad in Gram Panchayat Dhaugi in Kullu.
Issuance of NOC for running new five private Nursing Institute in the State is approved along with enhancement in existing seats of different courses in Eight Private Nursing Institutions.

Ahead of HP Assembly Polls 2017, Govt. ready to pat its own back via special publicity campaign

Kangra-The demise of the Chief of Defence Staff, General Bipin Rawat, his wife along with 11 others onboard an Indian Air Force Mi-17V5 helicopter that crashed in Coonoor of Tamil Nadu on Wednesday shocked the nation.

Tributes were pouring in across the world for India’s first CDS and other departed souls.

A village in Kangra district – Thehado (ठेहडू) in Jaisinghpur subdivision-is also mourning the demise of Vivek Raj who was also onboard the ill-fated chopper. Lance Nayak Vivek Kumar 1 Para (SF) was PSO to the CDS, Bipin Rawat.

Vivek left behind a wife and 2-months-old son. He had joined the J&K Rifles in 2012 and later served as a commando. He had got married in 2020. The news of his departure has left the family devastated. A pall of gloom has descended upon his native village. His father Ramesh Chand is a daily wager and his mother is a housewife. His younger brother runs a bakery shop in Baijnath.

On Thursday, officials from the Defence visited his house for collecting the DNA sample of the parents. The bodies, according to the report, were burnt so badly in the crash that it was difficult to ascertain their identities. The DNA samples would help in the identification.

According to the official reports, the sole survivor of the crash, Group Captain Varun Singh, was on life support at the Military Hospital at Wellington.

Meanwhile, the Indian Air Force has retrieved the Flight Recorder of the Black Box of the helicopter. The cause of the crash was still under investigation.

Bipin Rawat along with his wife and other 13 was on his way to the Defence Services Staff College in Wellington to deliver a lecture.