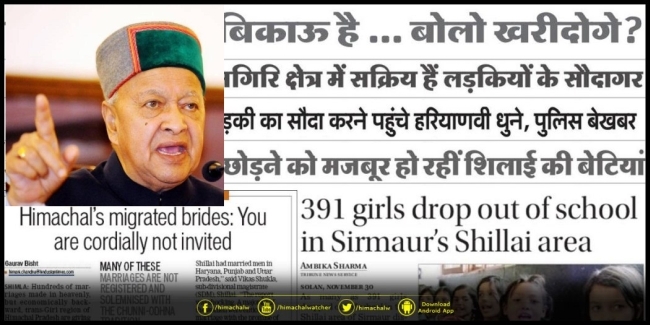 Himachal Pradesh Chief Minister Virbhadra Singh lashed out at a Hindi Newspaper for alleged “defamatory and deceptive ” series of stories it had published about alleged trafficking/sale of girls on the name of marriages in Shillai region of district Sirmaur.

The Sub-Divisional Magistrate of Shillai, Vikas Shukla, who had reportedly ordered the survey, was immediately transferred to Arki and the Editor of the daily was summoned for alleged fabrication of facts that hurt the sentiments and self-esteem of the people of Shillai region. The CM called the report as completely deceptive.  He has also claimed that the Women Commissioner, who visited the region after the matter came to limelight, and the district administration did not find any truth in the news reports published by the Hindi daily.

The conspiracy to defame the state and its daughters won’t be tolerated at all and the officials should have taken action to prevent attempts to bring disrepute to the state,

Reportedly, the SDM had highlighted the issue based on a survey conducted under Integrated Children Development Scheme. (ICDS) in which startling revelations were made that raised questions over efforts of the government for socio-economic development of the region. The news was covered by not only Hindi dailies, but English newspapers like Times of India, Hindustan Times, Statesman etc.

According to findings of the said ICDS report, during last two decades, nearly 1,000 girls were married outside the state, mostly in Haryana. It was alleged that as sex ratio in Haryana is very low (879 females per 1000 males), men take to tempting parents of this poverty-stricken and isolated region of Himachal.

The Tribune had also published a finding of the ICDS survey in which it was reported that 391 girl students dropped out of school prior to matriculation in just one year.

What doesn’t appear to a co-incident is that Peoples’ Action for People in Need (PAPN), an organization had also reported the prevalence of the trend in the region including child marriages.

Himachal Watcher had also compiled major facts reported from various sources including the official statement of the SDM and the Director General of Police, Sanjay Kumar. DIG had also rejected the report refuting registration of any such complaints from the locals.

Apparently, such revelation, if true, would damage the reputation of the current government ahead of HP Assembly Polls 2017. Reported poverty and lack of employment opportunities are directly associated with governance and concern of the political leaders about development of remote regions of the State.

The CM rubbished the news saying no such conspiracy by media would be tolerated that brings bad name to the State.  The CM clarified that the region is well connected with good roads and 100% homes have electricity. The number of school and college going girls was higher than boys (600 out of total 918 students are girls), claimed the CM.

Fabricated and frivolous series of news of the so-called trafficking has hurt the sentiments of the people of the state, particularly the residents of Sirmaur district, as no such case has come to the notice of the police and no case has been registered.

Reportedly, people from Paonta Sahib and Shillai region staged a protest in front of the SDM Office alleging maligning image of the region by highly derogatory and unethical reporting.

He further defied the reports about backwardness of the region.

Students from the Shillai area are studying among others in the three colleges at Shillai, Kaffota and Aanj Bhoj and the percentage of girls studying in these colleges is about 80 per cent.

However, the ICDS survey report, statements of the SDM, and the agreement of a non-profit organization with these reports still requires logical explanation before they could be rejected entirely.

Saying ‘Jai Shri Ram’ does not make one a ‘Parama Bhakta’, Bhagwaan not a BJP patent: Himachal CM