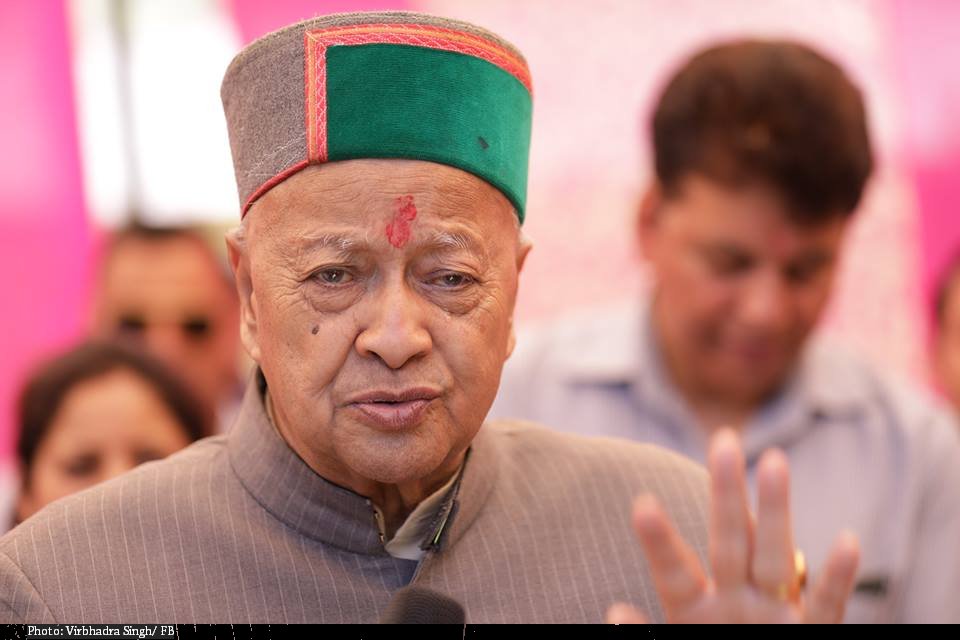 Shimla: The Chief Minister Virbhadra Singh is completely cornered by the oppositions over alleged conspiracy in the investigation conducted by Himachal Pradesh Police in the gangrape and murder of a minor girl in Kotkhai, Shimla district.

Entire Himachal is now wondering how the State Police has left states like Bihar and Uttar Pradesh behind in terms of lawlessness with this single leap.

He had refused having any knowledge regarding the posting of four photos on his official Facebook page, which were deleted after few minutes of posting. His IT Cell had claimed it to be a technical glitch. These photos had vent viral and deepened the doubts of people.

He was also criticised for insensitive remark over this gruesome crime after he said such kind of incidents keep happening in society.

The Chief Minister had also remarked “CBI is not God” and that the state police was equally competent in investigating this crime and deliver justice to the victim. He consistently maintained the state police have done a remarkable job by nabbing all accused within a few days.

While addressing a public gathering in Padhar, Mandi, in July, he said the issue was being given hype to gain political benefits ahead of upcoming HP Assembly polls.

A day before the police officials were arrested, the Chief Minister had tapped the back of State police in relation to this investigation. In a statement given to a Hindi daily during an interview, he had said the state police did an admirable job, but opposition created all the rucksack.

The aggressive protests and violence in Kotkhai after custodial death of Suraj was only a political vendetta to defame the government ahead of assembly polls, had said the Chief Minister.

The Chief Minister was forced to order a CBI inquiry only after these protests begun to take aggressive form. A day after HP Police claimed to had solved the case in a press conference held on July 13, angry locals in Theog had roughed up the police staff including then Superintendent Police of Shimla, DW Negi.

No one except the State government and police believed the case was solved and all real culprits were arrested. From parents to locals, majority suspected conspiracy and manipulation of true facts in the investigation.

However, after eight police officials were arrested by the CBI in relation to the alleged murder of a Nepalese accused at the Kotkhai Police Station, the state government came under fire.

On August 30, Gudiya Nyay Manch had staged an aggressive protest in front of the Police Headquarters in Shimla. They demanded the removal of the Director General of the State Police.

Now the forensic reports of the DNA tests conducted on samples taken from the all six arrested accused were also reported to be negative. None of the samples matched with the samples collected from the crime scene, said sources.

Oppositions (BJP and CPIM) are now demanding the resignation of the Chief Minister and the DGP over complete failure in the investigation of the case. Oppositions are alleging the government is directly involved in shielding the real culprits. BJP staged a protest on August 31 too, and said it will continue to protest until these two don’t resign and President rule isn’t imposed till assembly polls.

Following the arrests of police officials, BJP MP Shanta Kumar said it was a blot on the state. BJP MP Anurag Thakur also questioned the credibility of state government and functioning of its police.

Former Chief Minister, Prem Kumar Dhumal, while addressing media-persons at Bangan on August 30, said the arrests have proved that the government was trying to shield the culprits and facts related to the investigation.

Not just political parties are protesting, but the common people are also shocked with these developments in the case. The distress in pubic is again aggravating as the CBI investigation is picking up momentum.

It would be a dark chapter in the history of Himachal Pradesh and a blot on the Indian Police if police department was proved guilty.

The common people, especially the poor will have no reason to believe they are safe or their right to justice is safe. Of arrested six accused, five were from poor families. Two of them were Nepalese laborers who worked in orchards of a local.

The next hearing is scheduled for September 6, 2017. The current course of investigation suggests huge damage to the credibility of the Congress government ahead of assembly polls.

Kotkhai CBI Probe: Shocker for HP Police as all accused given ‘clean chit’ in DNA testing