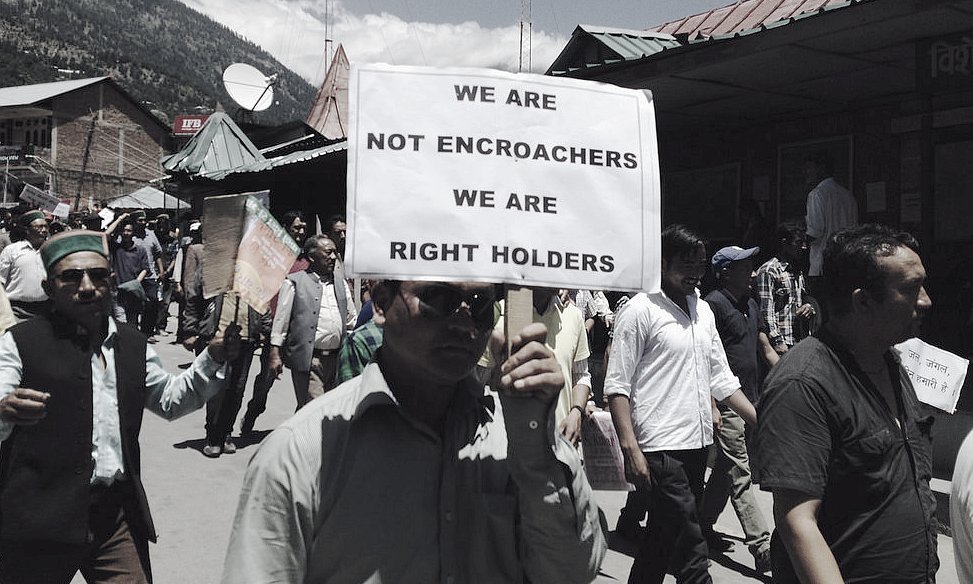 SHIMLA– The members of the Himachal Van Adhikar Manch, a state level forum of social organisations advocating implementation of the Forest Rights Act 2006, ha s again insisted the State government that FRA is the only way to provide relief to landholders facing fear of eviction from forest land after court order in 2015. The forum met in Shimla on Sunday to discuss the issues of landholders with forest land occupations facing the threat of eviction in the state.

As another initiative, the members of the manch plan to meet the High Level Committee constituted to review and resolve the issue of encroachment cases in Himachal and make a submission that the implementation of the Forest Rights Act, 2006 is the key legal option that can be utilised by the government to provide protection to those eligible under FRA. Last month the Himachal Van Adhikar Manch had petitioned the Chief Minister of Himachal Pradesh with the same submission.

The forum states that “the Scheduled Tribes and Other Traditional Forest Dwellers (Recognition of Forest Rights) Act” was passed by the Central government in 2006. This Act was historical because it provided the much needed relief to those who had years of “occupations” on forest land for their bonafide livelihood needs, but were under threat of evictions because of Forest legislations in the country. Provisions of central legislations like the Forest Conservation Act 1980, the Wildlife Protection Act 1972 and other orders of the Supreme Court made diversion of forest land for non forest purposes impossible without permission of the Central Government.

The call by the Himachal Government in 2002 to ‘regularise’ forest occupation was untenable given this legal context and any future efforts on similar line can be challenged under any court of law like 2002 regularisation policy, it said.

It is imperative for the government to note that the FRA is the only legal option available to the state government to provide relief to land occupiers facing the threat of eviction because of the Shimla High Court Order of April 2015, said the forum.

However, it’s important to note that the Act neither meant to distribute land nor to regularize the encroachments.

The forum threw light on the provisions and purpose of the act. The Forest Rights Act, 2006 was especially brought about to empower the local communities to be able to give permission for village development activities under Section 3 (2) of the said Act, said the forum. The said Section of the Act has already been implemented by the State of Himachal Pradesh with a clear instruction from the Chief Minister in whole Himachal and guideline from MoTA with reference to HP letter dated 14th December 2015.

In similar way, added the forum, the state government should show its commitment to deal with the cases of land occupation under section 3(1) of the Act which allows filing and settling of claims of individuals and community for their bonafide livelihood needs.

Further, the statement said that even in a developed state like Kerala where forest area is 11309.74 sq kms, less than Himachal, 24,599 individual titles that have been issued for 33,018.12 acres of forest land. In Himachal which has a huge population of approximately more than 1.5 lakhs families of Gaddis, Gujjars, and other pastoral communities and medicinal plant collectors who are directly dependent on forest land for livelihood and 1.65 lakh families who have applied under 2002 encroachment regularisation policy of Himachal Government are possible beneficiary under this Act, there is a huge scope for the implementation of the Act. It is unfortunate that Himachal has lagged behind in the implementation of this Act so far. It is high time that the government does a course correction in the matter.

People Unaware of their Rights under FRA , 20016

According to the Act, the State government has constituted Forest Right Committees (FRCs) in all the villages in Himachal. But people still don’t have any knowledge about the Act. Further, they fear of eligibility criteria issued by the government in 2011. Claims filed under the Act by people have been pending at the SDLC and DLC level for the last 3 to 4 years.

For speedy implementation the Act Himachal Van Adhikar Manch demands that the government should withdraw the eligibility criteria. The matter be put forth to the Cabinet and directions for withdrawal be issued as early as possible.

Under FRA 2006 act, it is the responsibility of the State Government to provide all necessary information and resource materials related to the Act and its procedural aspects to all FRCs and gram sabha members. The forum demanded that the State Government should conduct the required trainings for the dissemination of all relevant information and resource material at the earliest.

Further, the forum added that the government should issue clear instructions to the chairpersons of SDLCs and DLCs of Kangra, Sirmour, Chamba, Bilaspur, Kullu and Kinnaur and others districts to consider and take decision on the claims received under FRA 2006.