Don’t underestimate it just as another annual fest; it’s much more than that. In fact, Exodia had already found a place in Himachal Watcher’s list of top campus fests in Himachal published a few months ago. Even sponsors find it an excellent opportunity to associate with event.

For three days, starting from April 7, the campus will not just sing and dance but will also feature technical contests which include everything from building robots to exploring Internet of Things (IoT). The event isn’t contained to indoor auditorium but is taking performers to field. I-Magination – a photography contest has already kicked-off and entries are pouring in.

A few glimpses from Exodia 2k16:

Moreover, to keep up the enthusiasm of contestants, organizers offer impressive monetary awards to winners.

These cultural events represent true spirit of their respective institutes. Students get a chance to show-off their talent and they make full of it. It’s the time when student find vent to release their academic stress. The quality of environment provided by an institute clearly reflects through its cultural event.

Here is an overview of the events and contests to be held this year: 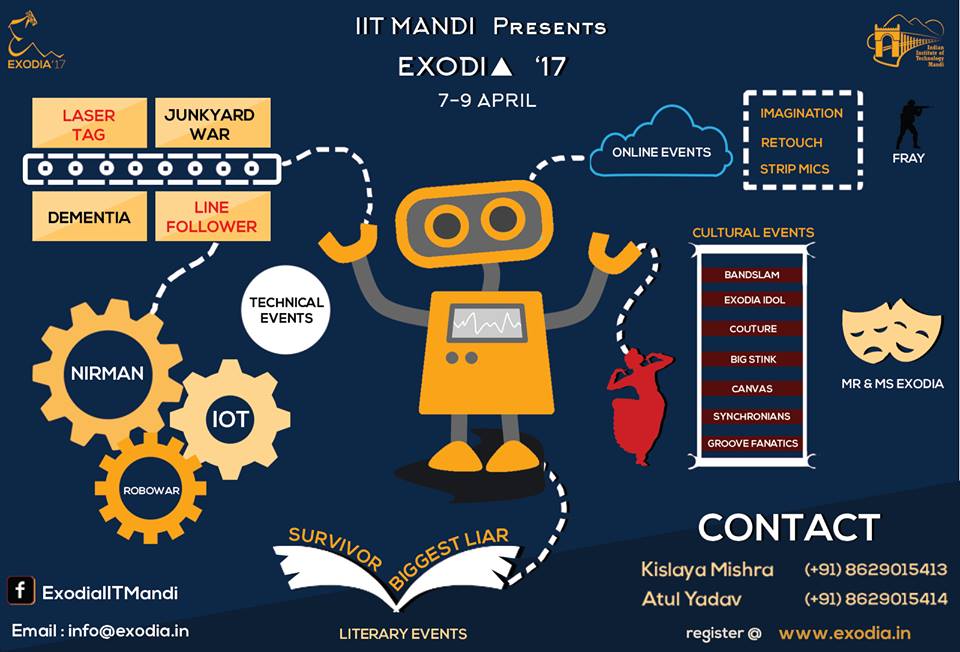 There about 19 different events including clash of music bands, battle of robots, mega gaming concert, street play, fashion show and some online events too.

Not just the performers, but the event also tests management skills of the organizer teams. The organizers of Exodia 2k17 are working hard and leaving no stone unturned to spread the word. The entries for contestants is open. To facilitate registration, IIT has developed a special website which is worth surfing through. All the information about events and details for registration are available on the official Exodia website as well on social media platforms. The event website deserves compliment for its neatness and amusing design.

On Women’s Day, St. Bede’s students get tips from IPS Shalini on Protection of Women against Cyber Crime