BILASPUR– Congress MLA from district Bilaspur, Bambar Thakur, who had been making headlines for his alleged ‘Gunda Raj’ in Bilaspur district, now faced serious allegations of corruption from the General Secretary of Himachal Pradesh Congress Committee, Ram Lal Thakur, who has also demanded CBI inquiry. While talking to media persons at the Circuit house here on Monday, Ram Lal Thakur, assuring that he has sufficient evidences, alleged the Bilaspur MLA of causing a loss of about Rs. 200 crore to the State during last four years. He has direct association with mining mafia and forest mafia, he further added.

Thakur said that Bambar Thakur is causing crucial damage to the image of the Congress party in Himachal due to his direct involvement in such corrupt practices to amass illegal monetary assets. Ram Lal said that he had approached the HPCC President and the Chief Minister Virbhadra Singh to take action against the legislator, however, both remained silent while Bambar Singh still continue with his illegal activities. The district police, he said, is also providing protection to the legislator despite protest from people against his ‘gundagardi’.

Thakur said that the relations of the Bambar with drug mafia in Punjab aren’t any secret either. The Bilaspur legislator has devoured lakhs of rupees as commission from four lane officials, he alleged. Also, despite prohibition on mining in certain locations in the district, huge amount of gravel and sand is being supplied illegally for construction of four-lane. Over 100 trucks are deployed in transportation of mining material while there is no record of money generated on the name of M-Form. Moreover, these trucks mostly belong to BJP leaders who are friends with Bambar Thakur.

Further, he alleged that Bambar Singh has been carrying out axing of Khair (Acacia chundra) trees in Kothipur, Panjgayin, Naina Devi etc. in association with forest mafia.

Ram Lal Thakur said that he will not remain silent about the internal enemies of the party. He referred to Bambar’s repeated bullying behavior like misbehavior with the female RTO officer, threats to doctors, and manhandling a DFO who tried to stop the MLA from carrying out illegal activity on government land. 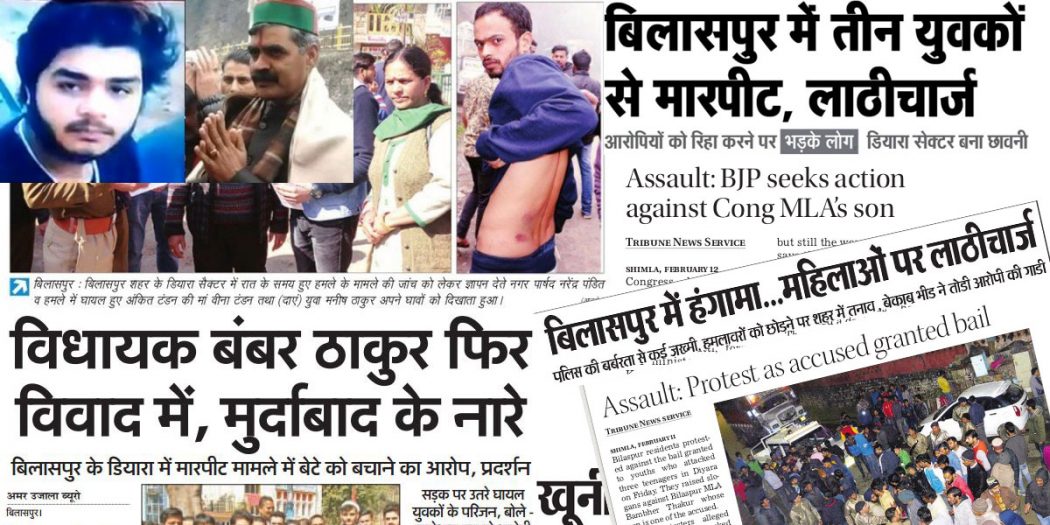 The officers have either got themselves transferred from Bilaspur or even quit their job owing to typical goon-like behavior of Bambar Thakur.

Very recently, the Vice-President of National Kisan Morcha and former MLA, Suresh Chandel, had alleged that Bambar Thakur be-fooled people by inaugurating a link road connecting main Kandror – Harlog (कंदरौर-हरलोग) road to jarloo-Tyamar-Bhyatar(जरलू-तयामर-भ्यातर) on May 31, 2017, that was built about 13 years ago. MLA even claimed allotment of Rs. 200 funds for the maintenance of the road which was not true, Chandel had told media in a statement.

It’s noticeable that Bambar Thakur had been giving controversial statements in media against Ram Lal Thakur and had even labeled some allegations against him. After remaining silent for a while, now Ram Lal has also opened attack against the Congress legislator. The differences between the Chief Minister and the HPCC President are already haunting the party. With these allegations, the internal differences between Congressmen in poll bound Himachal are clearly visible.