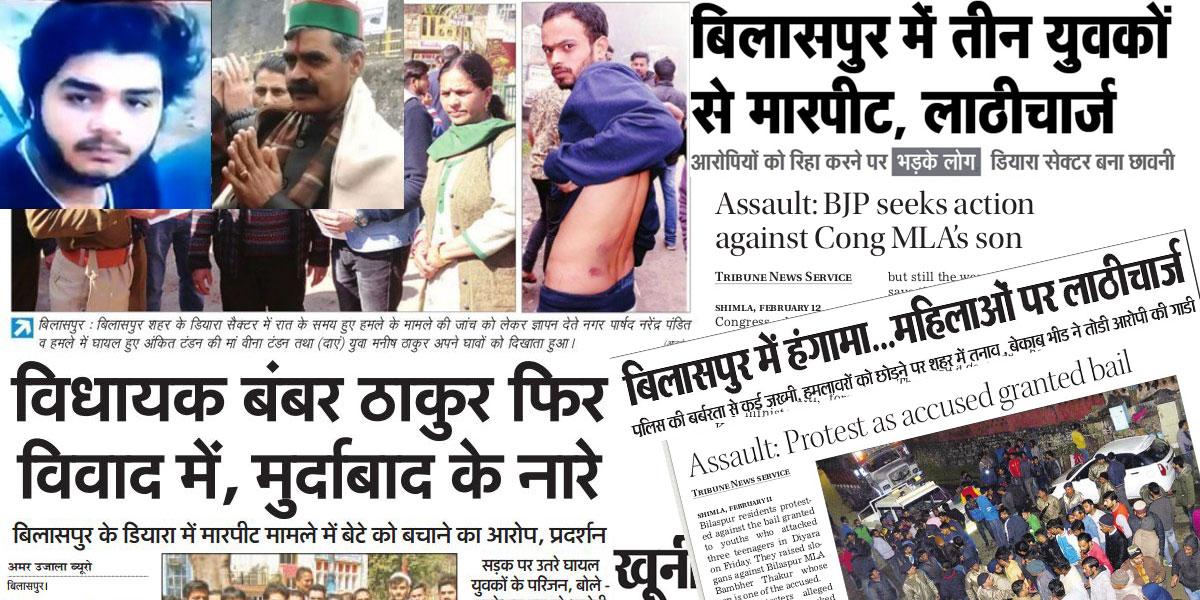 BILASPUR-The law and order conditions in district Bilaspur of Himachal Pradesh is degrading. Surprisingly, the Sadar MLA from Congress, Bamber Thakur, is the trendsetter here. He was recently reported to have assaulted the on-duty DFO, Bialspur. Later, he was found threatening a doctor for not yielding to his wish to manipulate official parameters set for issuance of disability certificate.  The police and the Chief Minister also appear to be helpless in controlling its notorious MLA.

After three youth were assaulted in Diara Sector by a gang that allegedly included Congress MLA’s elder son, now locals have come out in protest against this hooliganism. In a statement to media, locals have alleged Puranjan Thakur of assisting local smugglers.  Locals said to the media that they are fed up with regular hooliganism created by the Congress MLA and his son in the district. In a statement to a media channel, the locals alleged that MLA’s son used red-beacon of his father’s car to smuggle illicit drugs and that the MLA is patronizing growth of mafia.

Watch: Statement of Locals to a Media Channel

The allegations surfaced after three youth, Rohit Soni, Ankit Tondon, and Manish Thakur, were attacked in the Diara locality with sharp weapons by the gang. Three youth were reportedly beaten with hockeys, iron roads, and sharp weapons were left with serious injuries. As per the locals, the gang that included Anil aka Pintu, Sonu, paras, Kitwi, Rahul and Shiva, also included local MLA’s elder son. After the complaint the local police arrested six accused except the MLA’s son.

The parents and locals also alleged that police booked the hooligans for minor scuffle under IPC Section 107 and 151 despite the fact that the assault was fatal in nature. All accused easily availed bail and walked free within no time when a case under IPC Section 307 should have been registered, said the people. After accused were freed, the locals and parents protested in front of the house of the main accused. People demanded to bring the accused out of the house and deport them out of the district. Quick Response Team was called in to protect the accused inside the house that included some teenage boys and some girls as well.

According to a Hindi Daily, the MLA’s son was also present with others in the room. When angry public saw the accused being protected by police, they retaliated with stone-pelting on police vehicles. Following it the police cane-charged the mob. The cane-charge further infuriated the people who smashed and toppled the car of the accused. 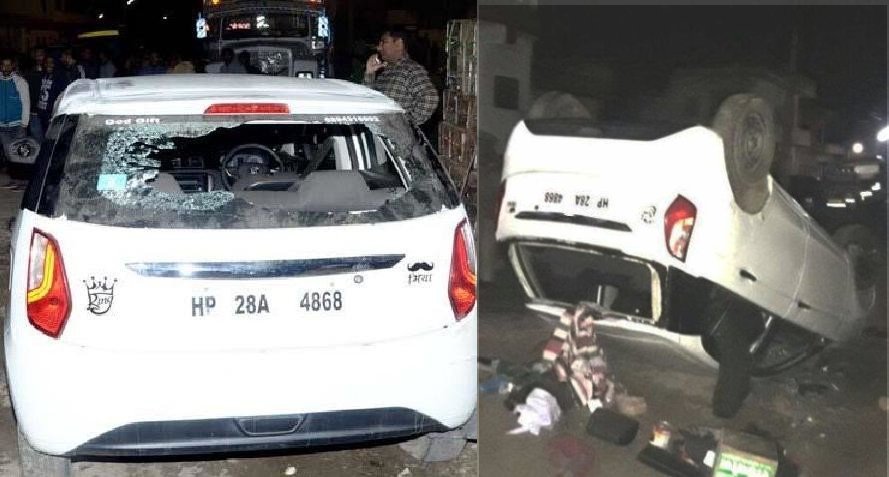 The locality also alleged police of cane-charging ladies who were present in the protest. They also asked whether police had obtained permission from the Sub-Divisional Magistrate (SDM) prior to cane-charge or not?

As per the report published in the daily, later, sharp weapons were found in the room and in the car of the accused. The report also said that a senior police officer came to the spot only to save the MAL’s son and even told people that his hands are tied by the government.

The locals alleged that the administration and police is doing everything to save Bamber Thakur’s son.

It is noticeable that Bambar Thakur was alleged of assaulting the DFO, Bilaspur for objecting to MLA’s illegal construction of road by felling trees. The State Congress remained silent the Chief Minsiter Virbhadra Singh also supported the MLA.

Recently, the MLA was found allegedly threatening and abusing a doctor in regional hospital Bilaspur for denying unlawful issuance of disability certificate to man. The doctor had even released a recording of the telephonic conversation with MLA.

However, the CM had given clean-chit to the MLA calling the incidents as a conspiracy to defame the party.

Apparently, the State party high-command has lost its control over the notorious MLA. The party has taken no measure to stop the MLA misusing his powers and manipulate police over and over again. At the end of the day, it was public that tolerated both assault by goons and cane-charge from police. It’s a matter of worry for people that their elected representative is acting like typical mafia openly without attracting any action from the party or the administration. Such manipulation by police and administration would only degrade faith of people in the law, which hazardous situation for any society.