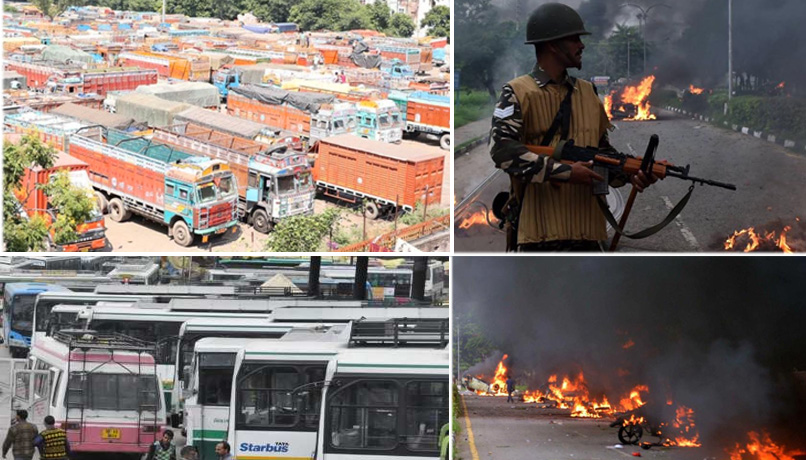 Shimla: Himachal Pradesh also faced the heat of the widespread violence in Haryana by the goons of Dera Sacha Sauda chief Gurmeet Ram Rahim after the announcement of his conviction by Panchkula CBI court on August 25.

The followers of the Dera in Himachal were reported in tears after the verdict was announced, but no violence was reported from any part of the State.

However, the state has faced losses worth crores of rupees in a single day and is likely to suffer over the weekend too.

The border areas of Himachal were sealed and entire traffic including trains, buses, cabs etc. remained suspended on August 25. The Transport Minister GS Bali and HP Police confirmed that the traffic will remain suspended on August 26 as well. The government will take a decision by evening after reviewing the status of the neighboring state.

Along with common commuters, thousands of trucks carrying apple crop were stuck as all traffic on Chandigarh and Delhi routes was completely suspended by the government in view of the danger to lives of people and damage to public property (buses). The apple growers are facing huge financial losses and are still uncertain how long their crops would remain stuck in Himachal.

Other than apple trucks, thousands of other trucks have become immovable since August 24 evening.

The private Volvo service providers also shut down the services in view of the violent conditions prevailing in the neighboring state.

The tourism industry of Himachal faced considerable losses as the hoteliers reported drastic fall in occupancy during last three days. The hospitality industry in all major tourist destinations like Manali, Shimla, and Dharmasala was hit.

State capital Shimla did not receive daily supplies like milk and bread on Saturday. The vehicles are allowed to go up to Parwanoo only, that too under tight security. Daily milk consumption of Shimla stands at about 50,000 liters, which is mostly fulfilled through supply from the neighboring state.

Similarly, Solan and Kasauli too remained deprived of daily supplies.

The Tribune reported that nearly 50 students of Lawrence School, Sanawar, who are in Rajasthan to participate in a hockey tournament, are also stuck there along with their teachers and coaches.

HPKVN will offer employment support to 65,000 youth, Centre of Excellence to come up in Shimla: Govt