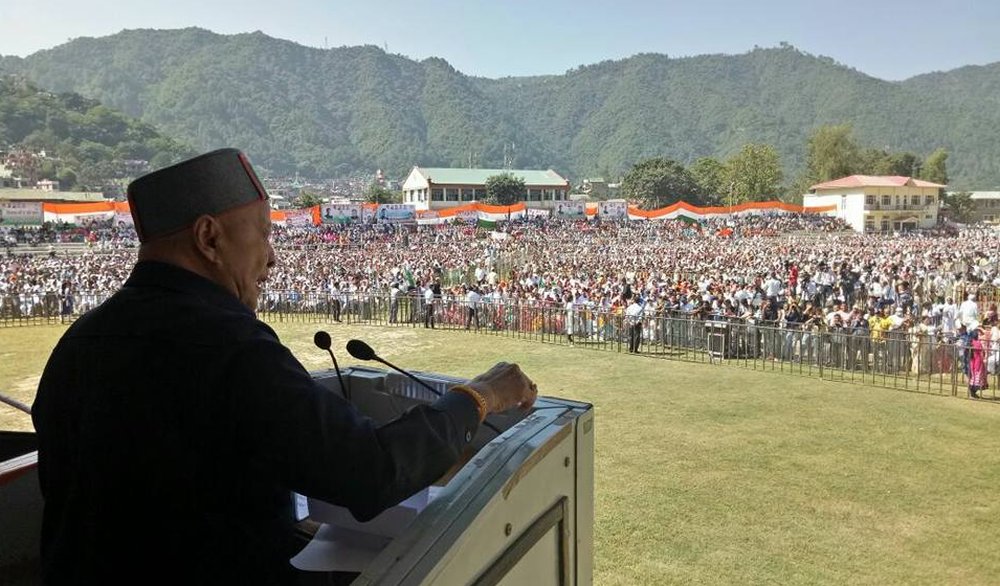 Mandi: In a public rally held at Paddal Ground in Mandi on October 7, 2017, the National Congress Vice-President, Rahul Gandhi, has announced Virbhadra Singh as the high command’s choice for Chief Ministerial candidate in the upcoming HP Assembly elections.

Rahul said Virbhadra is a ‘Fakir’ in the true sense. He urged the party leaders and workers to stand united to elect him as their Chief Minister for the seventh time.

On the other hand, Bhartiya Janata Party has still kept the state leaders in a dilemma. BJP is internally divided into two camps. The political activity and demand of the Union Health Minister JP Nadda have significantly increased recently. 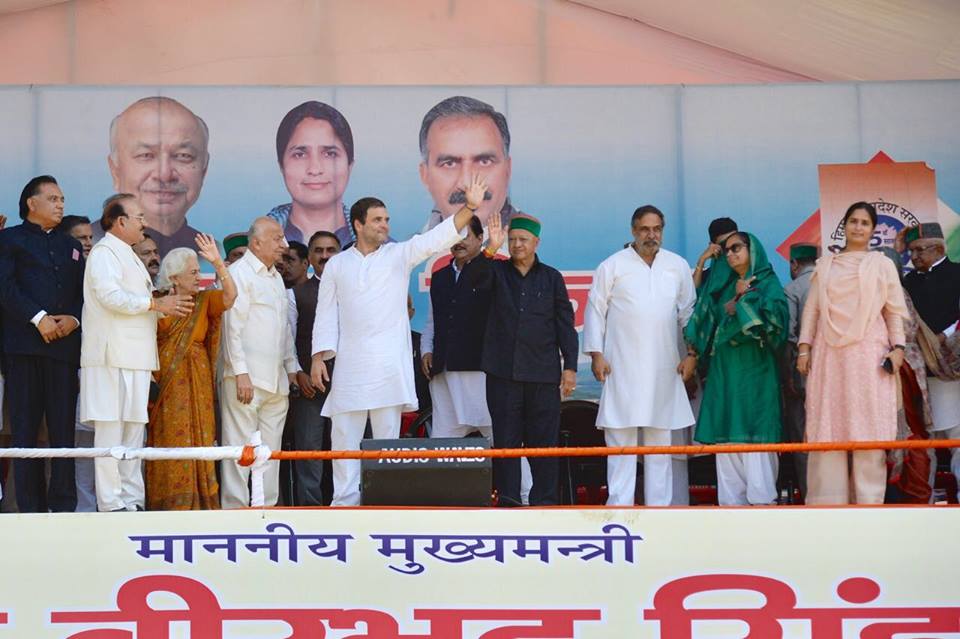 While addressing the rally, Rahul focused on comparing development model of Gujrat and criticised the NDA government for demonetization and GST. He did not speak of the corruption charges against the Chief Minister and other repeated allegations of BJP regarding the presence of forest and mining mafia in Himachal.

Chief Minister provided employment to around 70,000 youth in the government sector, he said.

The Congress-led state government gave unemployment allowance of Rs.1000 to the unemployed whereas there is no such provision in Gujarat. The government opened or upgraded as many as 15000 schools whereas the Gujarat government closed 13,000 schools during last five years, said Rahul. 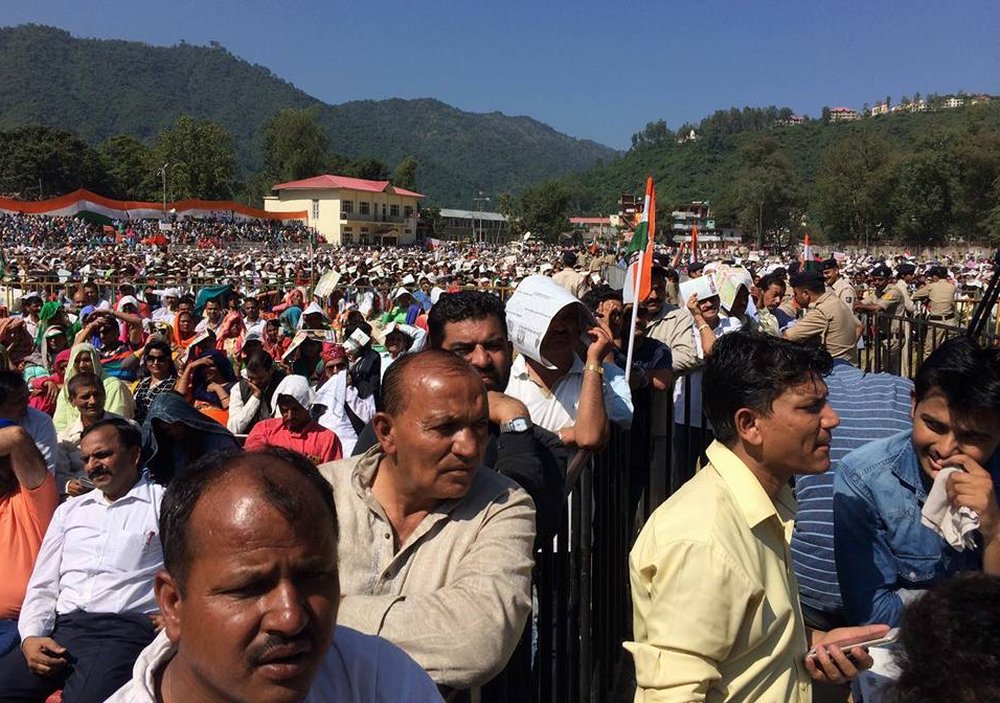 Rest, Rahul repeated the same claims regarding development in education, healthcare, youth employment etc. that the Chief Minister had been making.

He blamed Union government and PM Narendra Modi for the decline in Gross Domestic Product (GDP) and fall in GDP by 2 percent and said it led to mismanagement of the economic reforms.

He said the NDA Government has created trouble for all sections of the society by imposing Goods and Service Tax (GST). Services are now more expensive.

He said PM Modi has given the Indian economy the biggest blow ever. 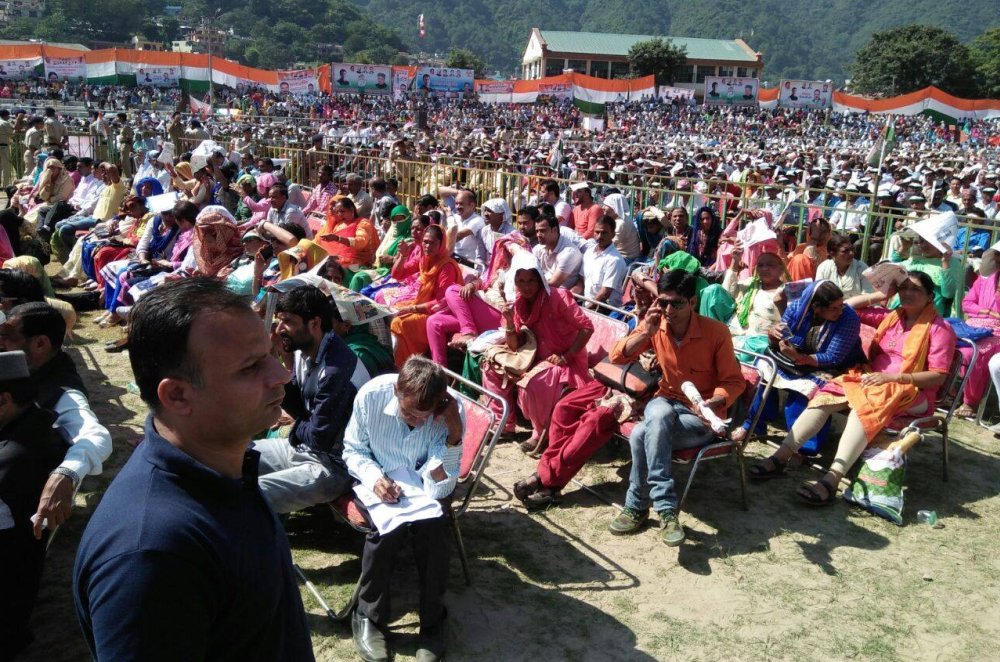 Instead of one tax throughout the country, the NDA has imposed five different types of taxes completely derailing the economy with the imposition of 28 percent tax from the very onset.

People were family members to me and I don’t have servant-master relation with them,

said Chief Minister. He credited the development of this hill state to Gandhi family, right from Jawahar Lal Nehru to Rajiv Gandhi. 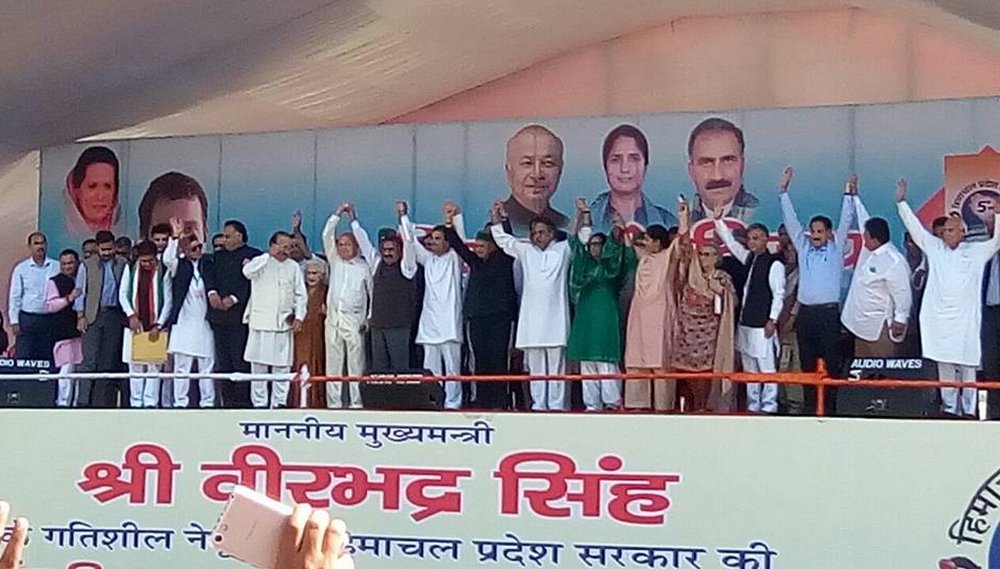 He said that 95 percent of the educational institutions are opened during the successive Congress regimes in the state. During last five years the government has opened or upgraded around 230 health institutions in the state, he said.

He alleged BJP of misinforming people about the AIIMS. The government provided the land for AIIMS as demanded by the Union Health Ministry, but the BJP state leaders claimed that Union Government sanctioned AIIMS and gave funds for it, he said.

I want to make it clear that it was the responsibility of the central government’s to provide state share for undertaking development and the funds provided for AIIMS was not from anyone’s personal pocket, it was the funds from ‘Bharat Sarkar’ from the share of the state which the state government deserve and have full right to ask for,

The Central Government can boast of funds provided to Union territories which were under the direct control of the Union government but it can’t claim the share of states as its own.

He said irrespective of the government in the centre, it is the moral duty of the Union government to release the funds earmarked for the states.

At the time of the formations of the state, there were hardly 288 kilometers of road and today the total road length stands 37,000 kilometers, he said

The state achieved 100 percent electrification, every village has drinking water facilities, he said. There are137 degree colleges in the state and 57 were opened in this tenure of my government.

Virbhadra lied to Rahul Gandhi about allowances given to unemployed youth : BJP