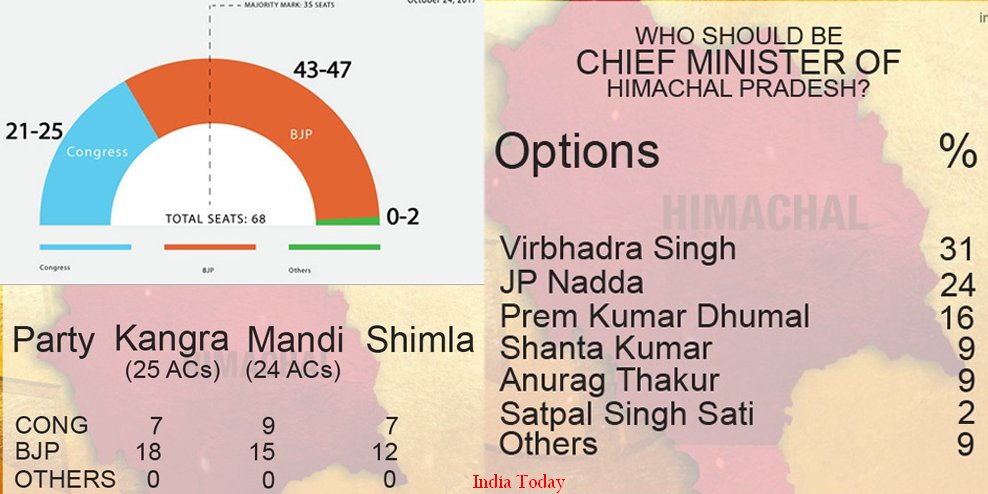 Shimla: As the round of nomination filing is over, the round of opinion polls have been kicked off by the media. A huge chunk of it is believed to be paid as the election season the most beneficial for it. However, it is upto the readers to decide whether they agree or disagree with it.

To spice things up, India Today –Maxim India claims to have conducted an opinion poll. It has predicted that the Bhartiya Janata Party will reign in the upcoming elections to the Himachal Pradesh Legislative Assembly.

As per the opinion poll, BJP is all set to register a victory on as many as 47 seats while Congress would shrink to somewhere between 20-25.

It said the BJP would form the government in Himachal by obtaining about 49 percent of the vote share. The opinion poll also claimed that BJP would lead in three major districts namely, Kangra, Mandi, and Shimla.

However, Virbhadra Singh was still the most popular choice for the seat of Chief Minister with 31 percent votes followed by the Union Health Minister JP Nadda on the second position with 24 percent votes.

Other leaders including former Chief-Minister Prem Kumar Dhumal and Shanta Kumar had reached the bottom of the list.

About 28 percent of the surveyed people believed Virbhadra did work for development. Further, the major issue for the election was reported to be unemployment.

It is pertinent to mention that the BJP has been claiming a victory with 50 plus seats.

However, Congress believes otherwise. The party has maintained that the public will react to inconvenience due to demonetization and Goods Services Tax.

The counter-campaign of Congress in Himachal is likely to follow the Indian National Congress President Rahul Gandhi, who is targeting the Modi government over the GST issue. Yesterday, while addressing a people at an event, Rahul called it a Gabbar(G) Singh (S) Tax (T)

On the other side, BJP will target the face of the Congress in Himachal – Virbhadra Singh.  Therefore, BJP will highlight Virbhadra’s  ongoing corruption cases.

Moreover, the drama that took place before the filing of nomination for the Theog Assembly and rejection of senior-most leader Vidya Stokes’ nomination could cost Congress a lot.