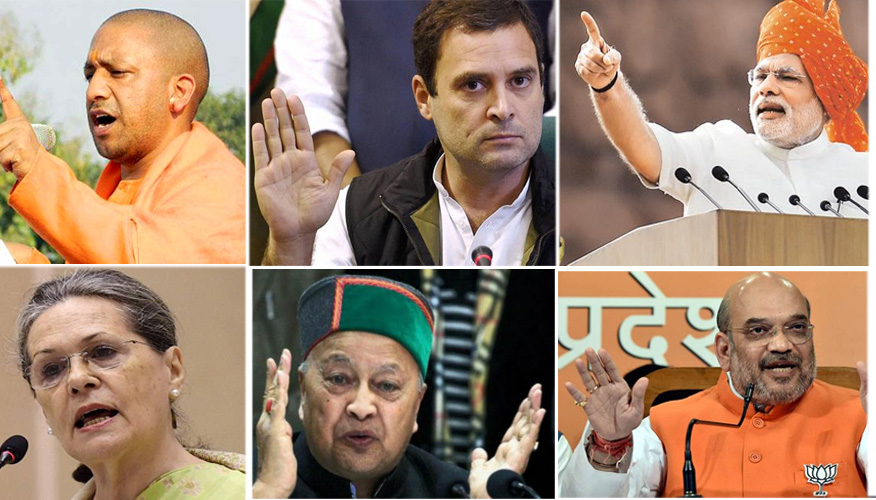 Shimla: The political battle over the power in Himachal Pradesh has gained more momentum as the last date of the nomination is over. As per official report, total 479 candidates including independent candidates have filed their nominations.

Both the major candidate parties, BJP and Congress, have also announced the list of their star campaigner who will appeal people to cast votes in favor of their respective parties in the elections to the Legislative Assembly of HP scheduled for November 9.

Each party has named about 40 personalities including the Prime Minister Narendra Modi, Yogi Adityanath, Amit Shah and top leaders of the opposition including Sonia Gandhi and Rahul Gandhi.

However, the parties have not declared the schedule for these campaigners.

The BJP will be banking on the ‘Modi wave’, which is rapidly losing its force post demonetization and haphazard implementation of the Goods Services Tax (GST).

While BJP will concentrate on inflicting damage to the reputation of the Congress party in Himachal by rubbing salt in the wounds of the Chief Minister Virbhadra Singh by highlighting over the money laundering and disproportionate assets cases, Congress is likely to highlight the developmental achievements of the current government, failure of Gujrat model, demonetization, and GST.

Congress is likely to stick to activities like opening or upgrading of schools, primary health centres, colleges etc. and introduction of skill development program and allowances.

The dynasty politics is another issue that the BJP will try to exploit. Along with Chief Minister’s son, there are other Congress leaders who have managed to secure ticket for their offspring i.e. Champa Thakur and Ashish Butail.

For Congress, the son of BJP supermo Amit Shah’s son, Jay Shah, will be on Congress’s target.

Second list of 9 Congress candidates released, Stokes out, Vikramaditya in