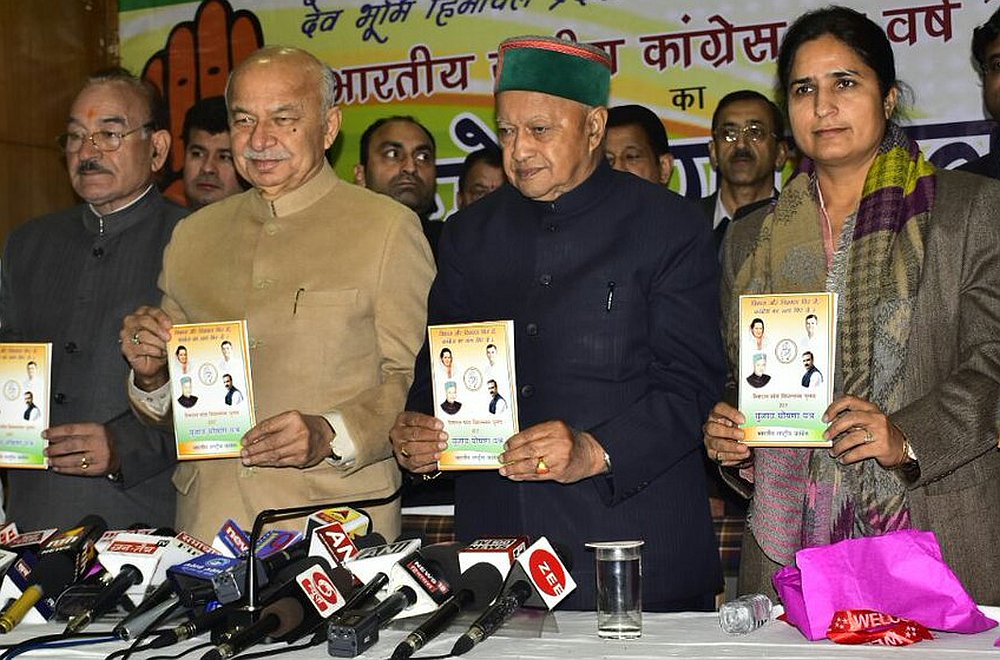 Shimla: The Himachal Pradesh Congress Committee today held a press conference on Wednesday at its headquarters in Shimla and released the party manifesto for the election to the State Legislative Assembly.

Led by the six times Chief Minister Virbhadra Singh, the Congress has made big and extremely tempting promises especially to the regular and contractual government employees and youth.

The Congress has tried to reach every sections of the society with its manifesto.

The Congress government, as usual, is promising ‘zero tolerance’ towards corruption and transparency through more use of information technology.

The party said that if it is elected by the public, then it would implement 4-9-14 pay scale to government employees. It has been a long pending demand of the employees, the party said.

Further, it assured regularization of the contractual employees in two years instead of current period of three years.

If elected to power, the Congress government assured the PAT, Para, Computer and other teachers of regularization.

The government has also promised to resume the pension benefits to the government employees recruited after 2003.

The age to avail the benefits of the old-age pension schemes, the age limit would be reduced to 75 years from current 80 years, said the manifesto. The citizens in the 60-75 age group would also receive social security pension.

Further, the Congress has promised that 5-10-15 percent pension allowance would be added to the basic pension.

On forming the government, the daily wage of the laborers would be increased to Rs. 350 from Rs. 210, said the manifesto.

The Congress has promised distribution of 50,000 laptops with 1 GB free data. It would include 35,000 meritorious students’ upto matriculation, 12,000 upto higher secondary, and 3,000 graduate students.

Under the Dr. Bhim Rao Ambedkar Scholarship scheme, the government would make provisions to send 10 meritorious students belonging to the SC category to foreign countries for higher education.

The party said it would open a gym and a ground in every panchayat of the state to boost sports activities. Every district would be provided a mini stadium, library and sports academy, said the party manifesto.

Further, the Congress said it would decentralize the power structure to empower panchayats.
The eligibility criteria for unemployment allowance would be made more flexible and liberal, it said.

The government promised to provide employment to about 1, 50, 000 youths in next five years.

The government would expand the training courses offered under newly established Himachal Pradesh Kaushal Vikas Nigam to help youths fetch jobs in the private sector, said the manifesto.Highlights of the HP Congress Manifesto for 2017 Assembly PollsIt would enhance the pace with which the public services are provided.

Other Highlights of the HP Congress Manifesto for 2017 Assembly Polls