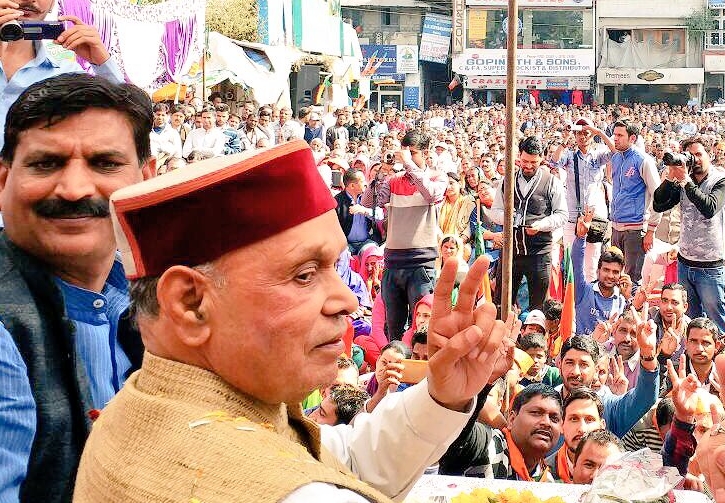 As it appears, Dhumal could not ignore this bait. The government employees and unemployed youth would be the deciding voter bank in the elections to the HP Assembly.

Shimla: The Bhartiya Janata Party is trying to keep up with the manifesto released by the Congress ahead of elections to the Legislative Assembly of Himachal Pradesh.

As a bait to this voter-bank, in its manifesto, the Himachal Pradesh Congress has promised regularize contractual employees on completion of two years’ service and fulfill the long-pending demand of  4-9-14 pay scale.

However, the opposition had not been very clear about its offers to the employees.

Now, as it appears, Dhumal could not ignore this bait. The government employees and unemployed youth would be the deciding voter bank in the elections to the HP Assembly.

The first bait came on November 4 while attending a public meeting in Solan, where Dhumal said his government would regularize 35, 000 employees on completion of two years of service.

The second bait was used on November 5 through a media statement. Dhumal said he would implement the 4-9-14 pay scale if elected to power.

On the other hand, the Congress government has assured the PAT, Para, Computer and other teachers of regularization.

The Congress has also promised to resume the pension benefits to the government employees recruited after 2003.

Now, the BJP also turned its attention towards the pensioners, and promised to hike the pension amounts.

Dhumal said that Virbhadra Singh did not fulfill the promise to implement 4-9-14 scale that he had made in 2014 polls. He said the Congress government had reverted the decisions of the BJP government taken regarding the employees.

He claimed that previous BJP government had spent Rs. 6685 crores on the salary and allowances of the employees.

The Congress has also assured that the age to avail the benefits of the old-age pension schemes, the age limit would be reduced to 75 years from current 80 years, said the manifesto. The citizens in the 60-75 age group would also receive social security pension.

Further, the Congress has promised addition of 5-10-15 percent pension allowance to the basic pension.

Again, the BJP had not been very specific about its offers made in the manifesto.

Earlier, the Congress was criticized for offering much more to the employees section than they deserve. However, at the end of the day politics matter.

Moreover, this particular section is also aware of the lobby it is capable of of creating.