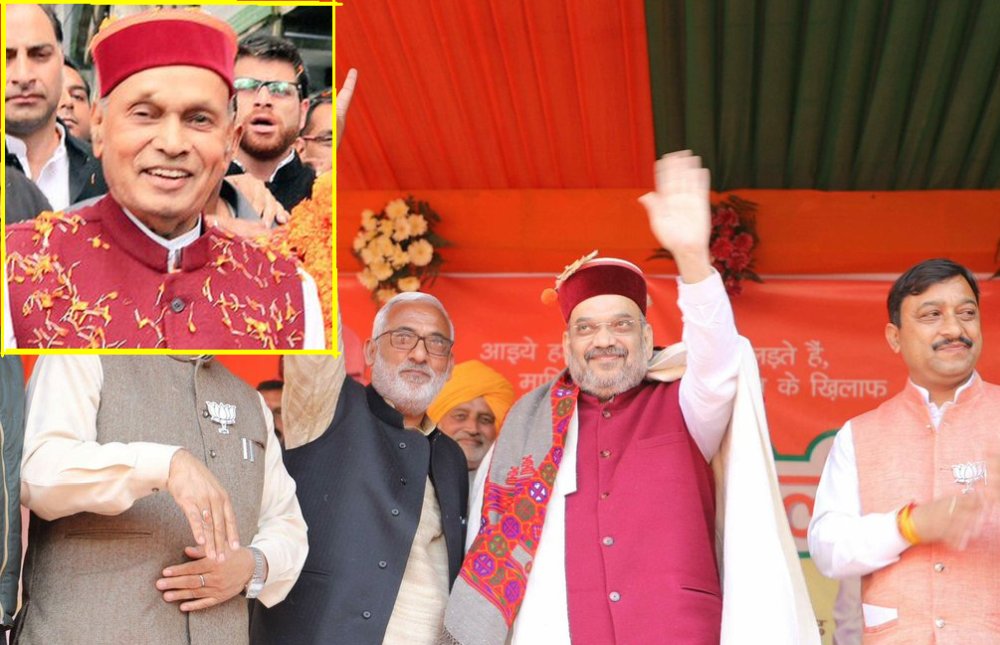 Shimla: While addressing a public rally in Rajgarh of Sirmaur district, the BJP supremo Amit Shah finally announced Prem Kumar Dhumal as the Chief Ministerial candidate for the elections to the Legislative Assembly of Himachal Pradesh.

The Dhumal camp, which was in distress due to the suspense created by the BJP high-command over selection of the CM candidate, was rejoiced at hearing the announcement.

Dhumal was reportedly facing an internal competition with the Union Minister Jagat Prakash Nadda for the CM seat.

Earlier, BJP had said that it can go to polls in Himachal without declaring CM face. However, the chances of internal faction were increasing with the delay in announcement of the candidate for the CM seat.

Apparently, the Dhumal camp weighed heavy in terms of influence and supporter base.

Now, the Virbhadra-led Congress will be fighting Dhumal, who is further dependent on ‘Modi wave’.

As expected, the BJP’s star campaigners are targeting the corruption cases against Virbhadra Singh. The opposition claims that the State government of Himachal was provided sufficient funds for various development projects like construction of National-Highways, but the Congress government failed to utilize them.

Deviating from the ground level needs, the BJP has now introduced Sardar Vallabh Bhai Patel into the scene.

Pandit Jawahar Lal Nehru was responsible for the creation of Pakistan, said BJP. There would have been no division of India if Patel had the charge of the nation, it said.

The party has released its ‘vision document’ recently. BJP is repeating the promise made during 2014 Lok Sabha Elections like doubling income of farmers, home for every citizen, helplines for women etc.

While BJP is challenging Congress to justify it tenure of five years in terms of achievements in Himachal, it is other way round in case of Centre where the Congress is poking PM Modi over his unfulfilled promises.

At the same time, the CBI probe against the CM and alleged shoddy investigation work by the State Police in the cases pertaining to forest guard Hoshiyar Singh and gangrape and murder of a minor in Kotkhai are trouble the Congress.

Complaint to EC against Modi, Nadda, Dhumal for violating Code of Conduct