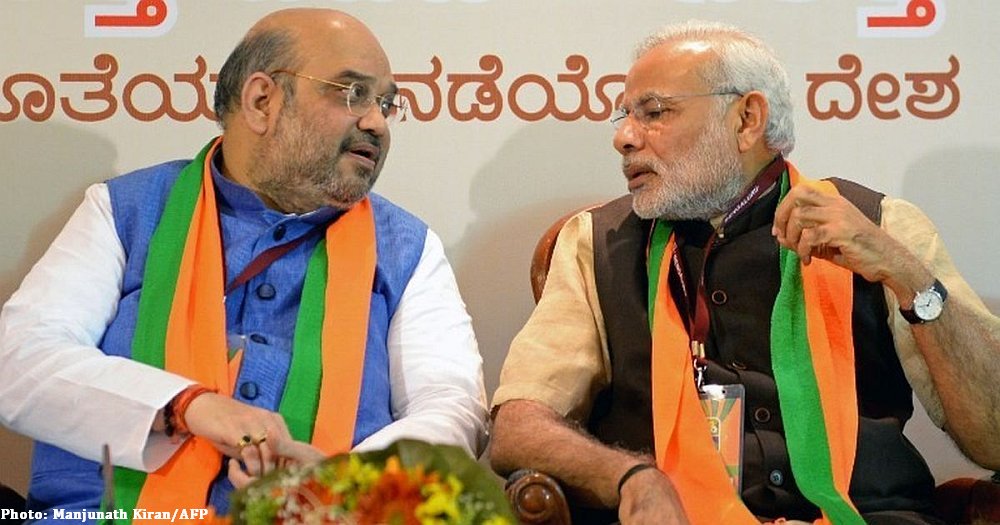 He said Himachal has become a land of mafias. There are five types of mafia in the state – forest mafia, mining mafia, drug mafia, tender mafia and transfer mafia.

He said the BJP would end all these mafias and eradicate corruption. Other campaigners like BJP chief Amit Shah and Chief Minister of Uttar Pradesh Yogi Adityanath are consistently targeting the State Congress over the corruption charges against the Chief Minister Virbhadra Singh and his family.

Here, it is necessary to question the basis on which the BJP wants the people to trust on their promises. The simplest way is to compare BJP-ruled states with Himachal.

The safety of women is another major issue that the BJP is pitching repeatedly.The crimes against women are rising in Himachal, says BJP campaigner.

There are valid points in these allegations. The mafias are active and corruption is also evident from the condition of the public infrastructure like roads.

The Chief Minister had himself rebuked the Public Works Department for its nexus with the private contractors.

Over two dozen people had died and thousands of others were inflicted by the deadly jaundice outbreak in 2016. The reason was that the contractor was releasing untreated sewerage from the treatment plant. The plant was barely working despite receiving about 1.30 crores per year.

Shimla city suffered critical water-shortage just because the government did not maintain the supply pipes and a huge amount was lost in leakage only.

The solid waste management is in tatters. All major towns are grappling with mounting heaps of garbage. Shimla city witnessed no improvement in the working of the sanitation workers despite change in the power after MC elections held this year.

The horrific case of gangrape and murder of a 16-years-old girl in Kotkhai in July this year and the mysterious death of the forest guard Hoshiyar Singh in Karsog division in June raised the alarm over increasing corruption.

The shoddy probe conducted by the HP Police’s Special Investigation Team (SIT) and arrest of eight police officials including the Inspector General Zaidi put the faith of people in the government at stake.

It is true that these evils have taken larger forms in Himachal.

For instance, the sitting Congress MLA of Bilaspur Bambar Singh Thakur allegedly thrashed the DFO over encroachment on forest land. A few months later, he was heard allegedly insulting and threatening a senior doctor posted at the district hospital.

The MLA allegedly wanted the doctor to make manipulations in a disability certificate to please one of his supporters. A transfer to remote and tribal area was the ultimate threat that the MLA was allegedly using.

The General Secretary of HP Congress Committee, Ram Lal Thakur, had alleged him of carrying out illegal businesses including mining. Ram Lal had also demanded a CBI inquiry against Bambar Thakur.

The transfer of the young IPS Officer Gaurav Singh, also called Baddi’s Singham, verified increasing influence of the mining mafia and involvement of politicians and MLAs in patorinizing them.

The BJP has promised to eradicate this corruption and make the State a better place. However, on what basis the BJP is making these claims? Did the crime rate drop down in BJP-ruled states? Did crime against women witness any decline in these states?

A report published by the Fact Catcher in February 2017 said that the BJP-ruled states have higher rates. The report had also alleged that the BJP was trying to manipulate crime related data of Uttar Pradesh. 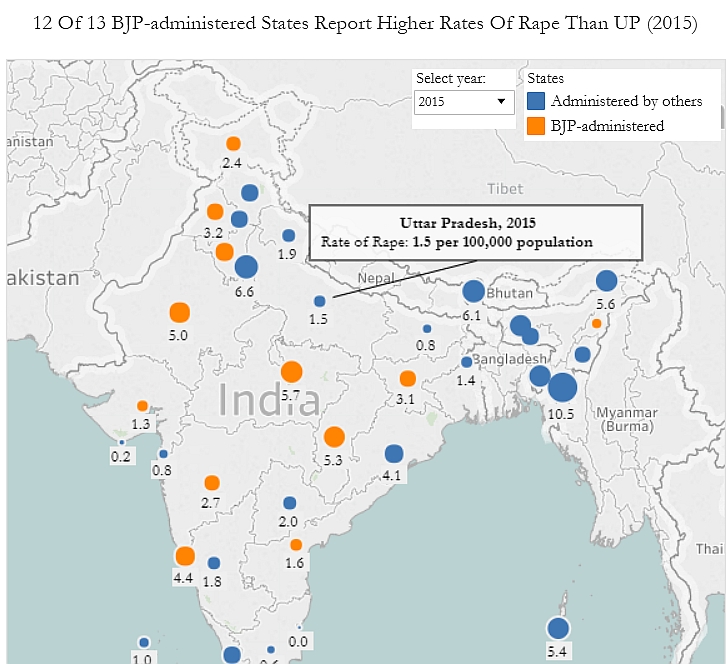 It does not make the Congress or Samajvadi Party any better.

The communalism already existed in the Indian society and the politicians had been making full of it.

However, during the three-year reign of the BJP communalism and religion have again come into lime-light upto such an extent that people were lynched by mobs. Now, the cows holds more value than human lives.

On the other hand, the big promises made by the Congress in its manifesto prove that the government employees are indeed the deciding vote-bank in Himachal. Transfer near home or to their desired region is one of the biggest temptations for the employees.

Transfer has always been the best way to deal with honest employees or those belonging to opposition.

The details of income and assets given in their affidavits filed by the contesting candidates of both major parties, the infighting for the tickets and shifting loyalty by swapping parties tell us that they are after power and wealth.

Why should we believe the BJP, Congress or any other parties when they are more or less the same behind the curtains?

As a matter of fact, HP BJP leaders in February had submitted a chargesheet with the office of the Governor. The party had level serious allegations against as much as 41 persons including the Congress MLAs, Ministers, Bureaucrats etc.

Anil Sharma, ex-minister, was also in this list. However, now BJP has inducted him and has forgotten the chargesheet.

Rest, the public had given PK Dhumal two chances to prove it is better than Congress. The point is to make these facts count on the polling day. 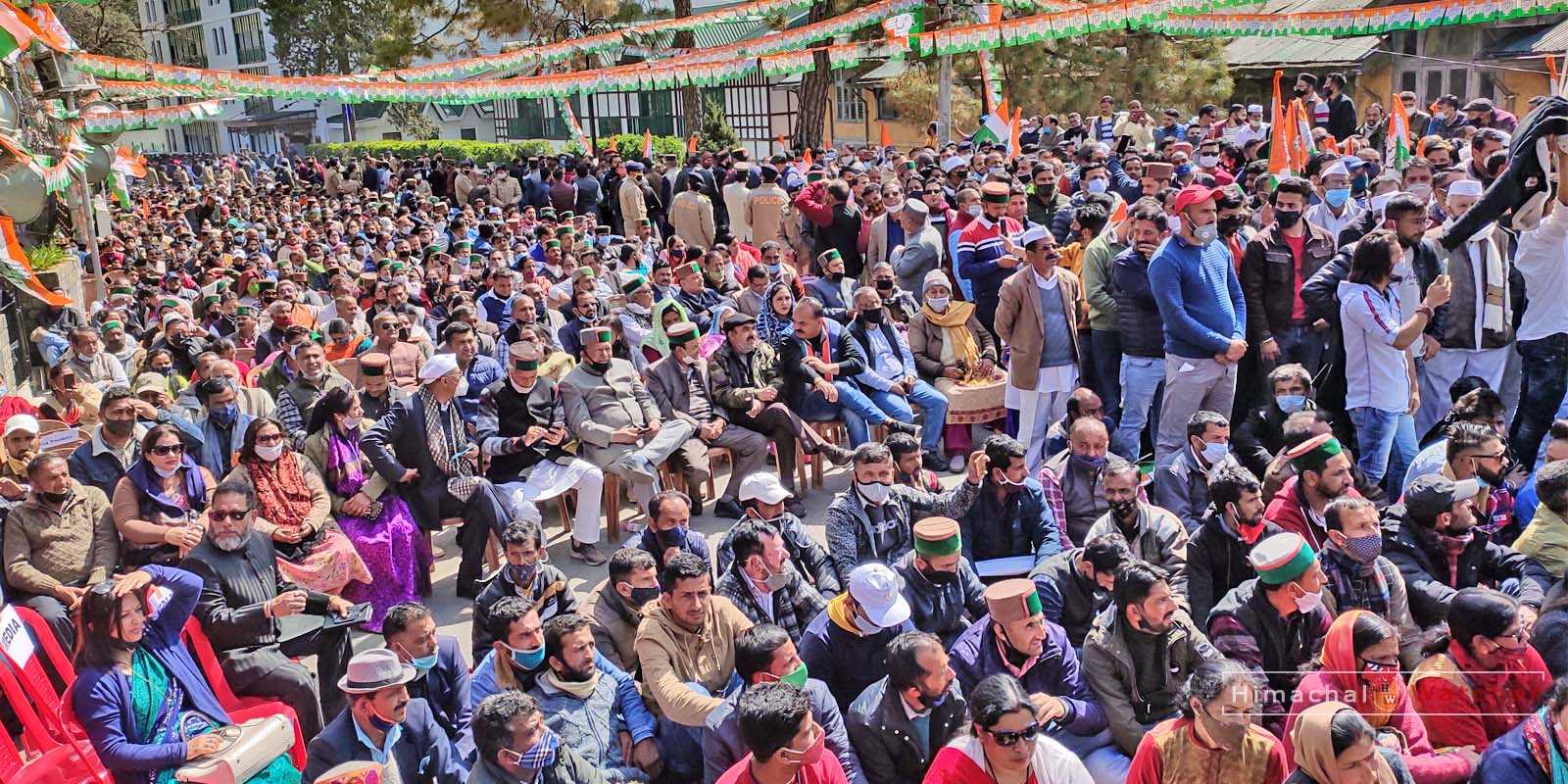 Shimla-Congress Jan Akrosh Rally held in Shimla on March 10, 2021, witnessed a huge gathering and was attended by veteran leader Virbhadra Singh, Rajeev Shukla, in charge and member of Working Committee of Indian National Congress and party representatives from various districts.

The rally was held to express anguish over price hikes in LPG and petroleum fuels, unemployment which is at an all-time high, rampant privatization by putting government resources on a sale for the benefit of corporate, corruption, and the promise of “Achhe Din” made by BJP before 2014 elections.

At the same time, the rally was a desperate attempt to revive Congress which is on the verge of extinction in context to role and power of an opposition. The leaders tried to send out a message to stand united and leave all sorts of differences behind to bring back the party to power ahead of elections to Municipal Corporations and 2022 polls in Himachal Pradesh. 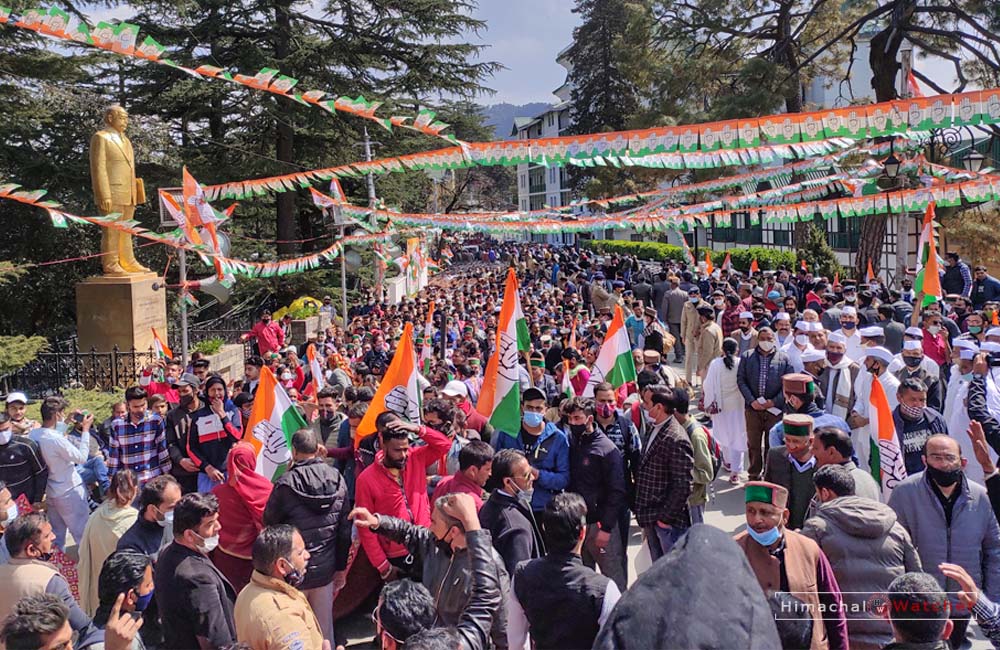 This extinction is worsened by internal politics – the reason the party has failed to show unity and fight as one unit for a long time now.

The scenes of Natti being performed by workers on the beats of traditional instruments being played by local artists cheered the crowd. Others had arranged Punjabi dhol to mark their presence more loudly . 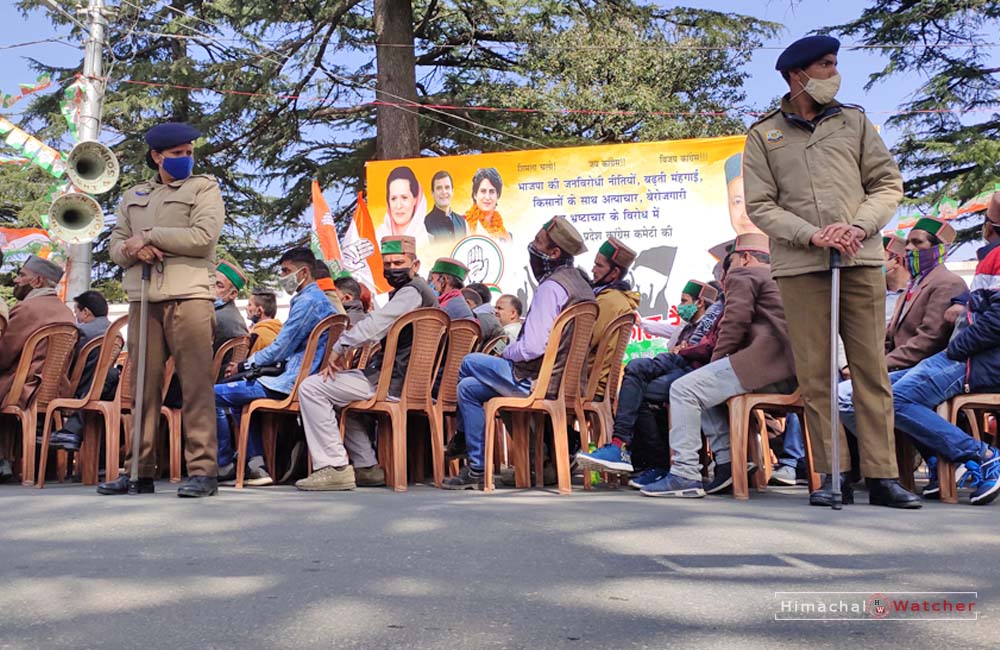 On reaching the stage to address the rally, former Chief Minister and Congress’s face in the State, Virbhadra Singh, also took a small moment to dance on Pahari music before proceeding to his speech. This was perhaps the only moment where workers actually felt most excited and tried to get glimpses of the veteran leader.

He advised the party leaders to establish and maintain the discipline to strengthen the party.

Shukla referred to Virbhadra Singh as “Shere-Himachal” while addressing him.

Shukla targeted Prime Minister Narender Modi and Bharatiya Janata Party Government by taking a jibe at them. He mimicked the signature dialogue of PM “Bhayion aur Behno” and asked the party workers to identify it.

“PM Modi is putting on sale everything Congress has built for the nation,” Shukla said while referring to rampant privatization of government organizations, services, infrastructure and resources.

In his address, the leader of the opposition, Mukesh Agnihotri, highlighted rising debt on the state. He gave an estimate of the debt ( Rs 85,000 crores) on the state at the end of current BJP government tenure.

You can get glimpses of the rally and listen to Shukla’s complete address in the video below: