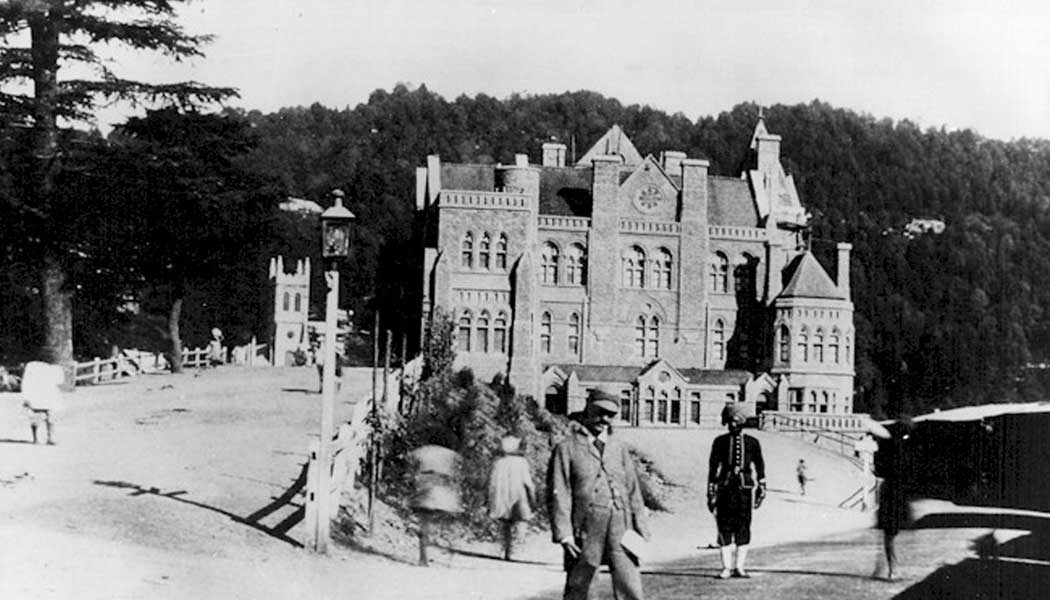 State High Court has finally admitted that such a marvelous piece of architecture cannot be left at the mercy of the ‘bubus’ (clerks or Govt. officials).

Shimla: The Tourism Department of Himachal Pradesh and the Shimla Municipal Corporation are up in arms to claim the possession of the precious piece of heritage property – the historic Town Hall of Shimla, built in 1908 by Scottish Architect James Ransone.

Built in the Gothic style, the Town Hall of Shimla featured the half-timbered Tudor style, all wooden frames and shingles eaves. It originally housed a Library alongwith a few public utility offices in British-era. However, later it ended up in the hands of Shimla MC.

The building is undergoing a complete renovation since 2014, and Rs. 8 crores has been spent on it so far.  The government failed to meet the deadline of 18 months and hope to complete it in 2018. About 70 percent of this cost was provided by the Asian Development Bank as a loan for the purpose of the beautification of the Shimla Mall.

The Corporation had evacuated it for the restoration work in 2014 and wants it back; the HPTDC wish to use it as a tourist attraction; and the High Court suggest making it a Library, Museum or something that would help preserving the heritage property along with catering to larger public interests.

The court has given the Chief Secretary to file an affidavit by January 3, 2018, with proposals for better use of the building other than handing it over to SMC again.

A writer and historian Raja Bhasin, head of Indian National Trust for Art and Cultural Heritage (INTACH) in Himachal, and its state convener Malvika Pathania are also of the view that it is a disrespect to a magnificent heritage building to house a government office in it.

After facing a disregard for its value as a cultural, historic, and tourist attraction, the State High Court has finally admitted that such a marvellous piece of architecture cannot be left at the mercy of the ‘bubus’ (clerks or Govt. officials).

The division bench comprising of the acting Chief Justice Sanjay Karol and Justice Sandeep Sharma called it “an important and significant landmark of the Shimla town and intrinsic part of its heritage.”

The court took a jibe saying that it would be a complete waste of the Shimla Town Hall if it is left to the staff of government offices. The babus would hammer nails into restored wooden works to hang calendars or paste the same all over the walls of a heritage property, which could be used to house library, museum and other public conveniences.

The court said, “under Article 51-A (Part-IVA) of the Constitution of India states that it shall be the duty of every citizen of India to preserve the rich heritage of our composite culture.”

Moreover, the history of the State in preservation and protection has been quite bad. For instance, another Gothic style heritage building Gorton Castle was gutted by fire due to carelessness.

On the other hand, the former-Mayor of Shimla Sanjay Chauhan argued that only the Corporation and Government are authorized to decide the fate of the building.

“It is a clear attack on the jurisdiction of the local government, and is a violation of the Section 243 W and 12the Schedule described in the Indian constitution,” said Chauhan.

Chauhan alleged that the government is allowing the ADB to intervene in its decision making process. He believes that the building should be returned to the SMC after restoration as decided previous to its evacuation.

However, the court has better logic. Referring to increased activity related to art & culture and tourism at the historic Gaiety Theater of Shimla after restoration in 2009, the court asked the government use the Town Hall in a similar way.

“The culture of knowing and understanding art, in whatever form, is being picked up by the younger generation and solely on account of the exposure, which both the artists, admirers or criticizers have got,” noted the court.

“After all, Art and Culture are also true forms of expression of thought, which, in our considered view, needs to be propagated, inculcated and promoted, more so amongst future generation,” the court further added.

The court also referred to the Vice Regal Lodge as an example of how a heritage property should be treated.

When an attempt was made to convert the same into a hotel, Hon’ble Apex Court had intervened and directed the said property to be protected and preserved, so that cultural and historical heritage of India and beauty and grandeur of the monument is preserved, said the court.

The court also referred to certain communication between the ADB and HP Department of Tourism and Civil Aviation suggesting that over the years, the woodwork of the Town Hall has decayed, and that it could be restored to its originality like the Gaiety Theater and put to better use.

The Corporation including the newly elected Mayor and Deputy Mayor believe the SMC is the rightful owner of the building.

In fact, the SMC had refused to vacate the building in 2014 for the restoration work over its demand that they should be given the alternative office within the town. The SMC is currently operating from the building complex of Deputy Commissioner, Shimla.

Before refurbishing the walls, the cement plaster and plywoods were to be removed along with restoration of the entrance from the Mall side to an open verandah.