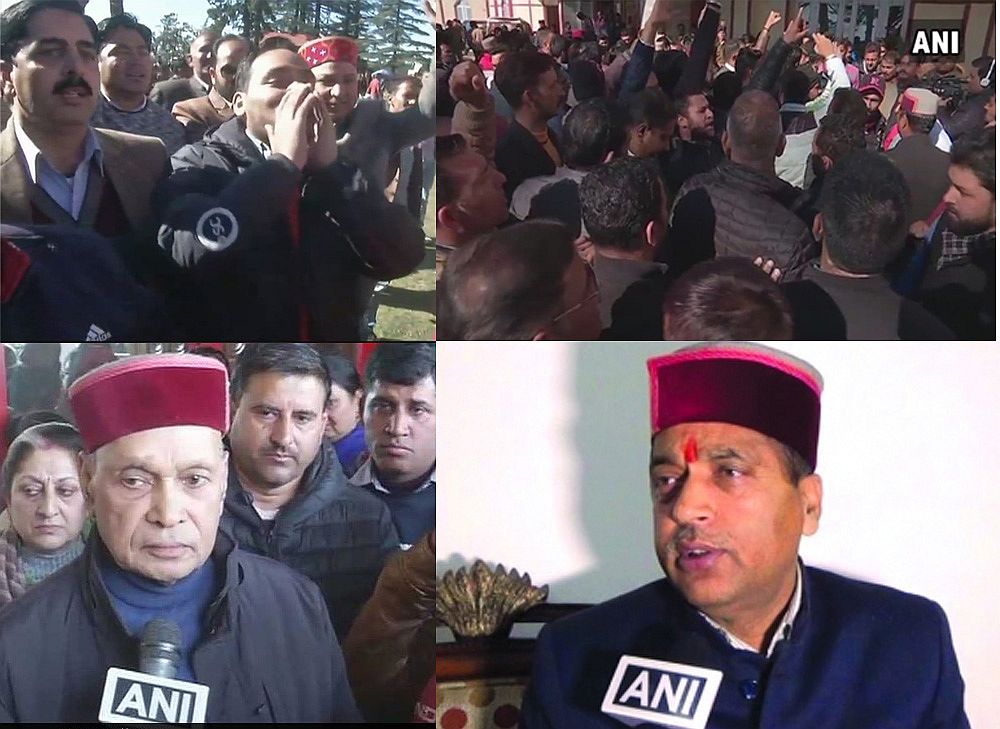 As per unofficial reports, in an effort to convince him to step back, Dhumal is said to have received assurances offering Rajya Sabha seat or post of the Governor to him.

Shimla: Instead of being a good leader, who was supposed to uphold the mandate of his people by humbly accepting his defeat in a fair fight, the two-times Chief Minister of Himachal Pradesh, Prem Kumar Dhumal seems to have opted to create a lobby alongiwith a bunch of winning MLAs loyal to him.

Alongwith losing the Sujanpur constituency to his Congress rival Rajinder Rana, now Dhumal is also losing respect as a politician as he ignores the dignity of the top post.

An internal member of the party, on the condition of anonymity, said the high-command has already taken the decision regarding the next Chief Minister but facing resistance from the Dhumal camp in declaration and execution of this decision.

While the central observers of the Bhartiya Janata Party, Nirmala Sitharaman and Narender Tomar, today arrived at the Peterhoff to convene a meeting with the State BJP’s Core Committee which includes Dhumal and party president Satpal Singh Satti, the supporters of Dhumal and top contender for the CM post, Jairam Thakur, almost clashed over the clamor of making Dhumal as the Chief Minister as announced by the high-command prior to elections.

As per the sources, Dhumal is not stepping back from the race for the top post despite attempts by the central and state leaders to convince him and facing bitter criticism from the senior leaders of his own party.

As per unofficial reports, in an effort to convince him to step back, Dhumal was even given assurances offering Rajya Sabha seat and post of the Governor.

The opposition leaders are also taking jibes at Dhumal and the party leaders for fighting like a bunch of spoiled kids for the CM’s chair. This infighting for the power hardly has anything to do with the good governance or interests of the common public. This is what the Indian politics is all about – the power, conclude political critics.

Meanwhile, the observes also held a meeting with the leaders of the Rashtriya Swayamsevak Sangh (RSS),

The situation grew so ugly that the two central observers were said to have found themselves caught in a ruck suck between supporters of two different groups. The observers reportedly had to warn the party workers.

If that wasn’t embarrassing enough, another group of supporters joined in this ugly fight for the Chair and shouted slogans in favour of the Prime Minister Narendra Modi.

A group of BJP supporters raise slogans in support of PM Modi outside venue of the Core Committee meeting, say “CM should be chosen from the elected MLAs, there shouldn’t be any lobbying” #HimachalPradesh pic.twitter.com/imJqgaz3OL

The senior BJP leader and former-Chief Minister of Himachal, Shanta Kumar condemned the slogan shouting in favour of making a candidate CM who was voted out by the public.

Raising slogans in favour of any one leader is wrong. If I was the party president, I would have expelled such workers. I did not like it,

Dhumal may have lost the elections due to party’s internal politics, but it is a bitter fact that he should accept as soon as possible. The political critics are of the opinion that Dhumal should admit he is no more eligible to claim the top post, at least not after losing his seat.

Such actions are only denting Dhumal’s image and the remains of his political career, if any.