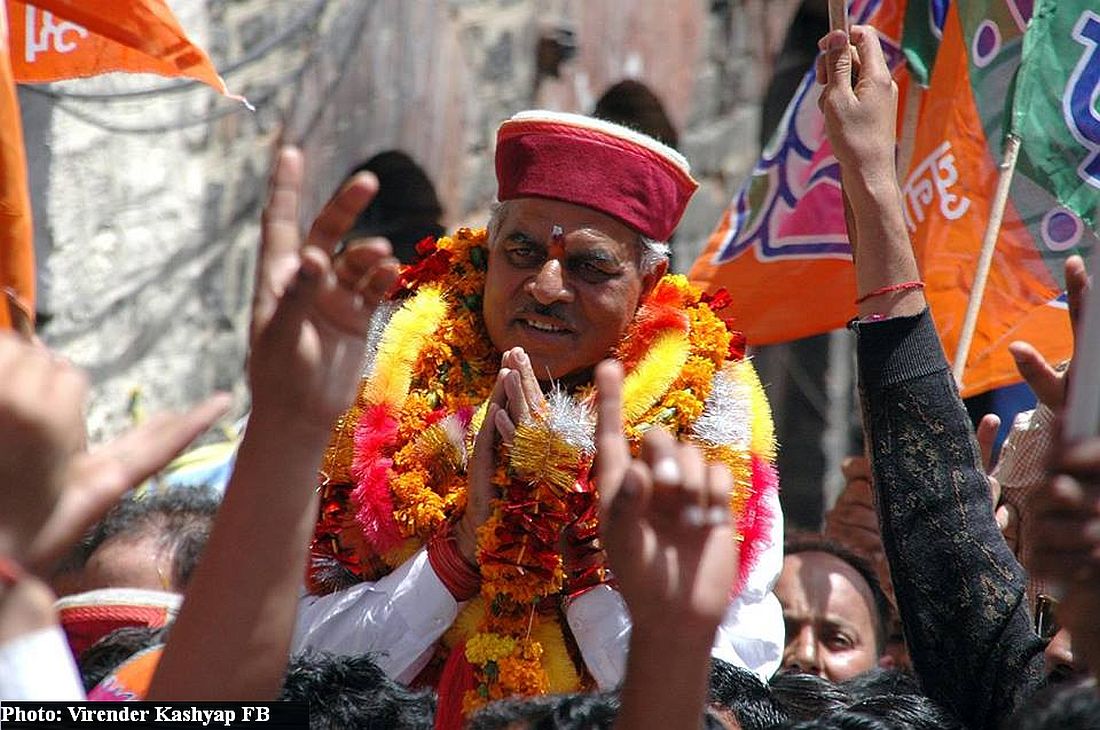 Shimla: Another state leader of Bhartiya Janata Party in Himachal Pradesh is in trouble in relation to the alleged case of bribery that dates back to 2009.

Earlier on January 4, 2018, sitting MLA of BJP, Jeet Ram Katwal, was booked for alleged forgery in providing information sought under the Right to Information (RTI) Act. The Chotta Shimla police station has registered a case of forgery on January 4, 2018, under Section 465, 466 and 469 of the Indian Penal Code (IPC)on the complaint of Pratap Singh Verma.

As another jolt to the BJP, which had made the corruption charges against then Chief Minister Virbhadra Singh a major issue before the recent assembly elections.

The sitting Member of Parliament from Shimla and BJP leader, Virender Kashyap, has been charge-sheeted in a case relating to a sting operation conducted by a TV channel on April 20, 2009 assembly polls. The sting had created a huge political controversy back then.

The BJP came to power in the State right after the sting broke out and Kashyap also won the elections on a BJP ticket. The case was allegedly hushed up by the district police, Solan, due to political pressure.

However, owing to the petition filed in the High Court by an RTI activist, Dev Ashish Bhattacharya, the case was re-opened in 2013.

Let us remind you that in the newly elected Legislative Assembly of Himachal Pradesh include 22 MLAs who are facing criminal cases. As per a report of the Association for Democratic Reforms (ADR), two of the 21 Congress MLAs and 18 of the 44 BJP MLAs and 1 CPM MLA and one of the two independent MLAs have declared criminal cases against them in their affidavits.

As per the reported contents of the CD of the said sting operation conducted by a TV channel, Kashyap was seen allegedly accepting a packet of money in exchange of some favour.

As per the audio, it was an alleged bribe from a private party about setting up of an educational institution. However, Kashyap was not holding any official position at that time.

After the sting created a huge political drama, Kashyap claimed that he had found the money in the hotel saying someone might have forgotten it there. A BJP party-worker even handed over the money to the local police next day.

The matter was allegedly hushed up initially, but ruling BJP government had to order an inquiry in 2010 under pressure. The Solan police formed a special team in February and filed a probe report on March 2

The police findings claimed no offence was committed by Kashyap. As expected, the BJP leader was given a clean-chit.

Later in 2013, Dev Ashish Bhattacharya, an RTI activist, challenged the finding of the inquiry conducted by the government in the court. The division bench comprising Justice D.D. Sood and Justice Kuldeep Singh had quashed the investigation report of the police.

In the same year, the court had also served a notice to Kashyap to file a reply within four weeks.

The activist had alleged that the police gave the BJP leader a clean chit without forensic testing like matching the audio with the voice-sample of Kashyap. He alleged the district police did not conduct a fair probe due to high political pressure.

On gaining back the power in 2012 assembly polls, the Congress government also ordered a probe by the Vigilance Department.

The Vigilance sent the said CD for forensic testing. After receiving positive results, the Vigilance and Anti-Corruption Bureau filed an FIR under Section 9 of the Prevention of Corruption Act 1988.

Now, the District and Session Court, Solan, has finally framed the charges against the sitting MP.

The MP, however, is still refuting the charges and calling it a conspiracy.

The State Congress party, which faced a humiliating defeat in the 13th assembly polls in 2017, has found it as an opportunity to poke the BJP government over the corruption charges on the sitting MP and FIR against a sitting MLA.

The Congress is questioning the silence of the BJP over the said case.