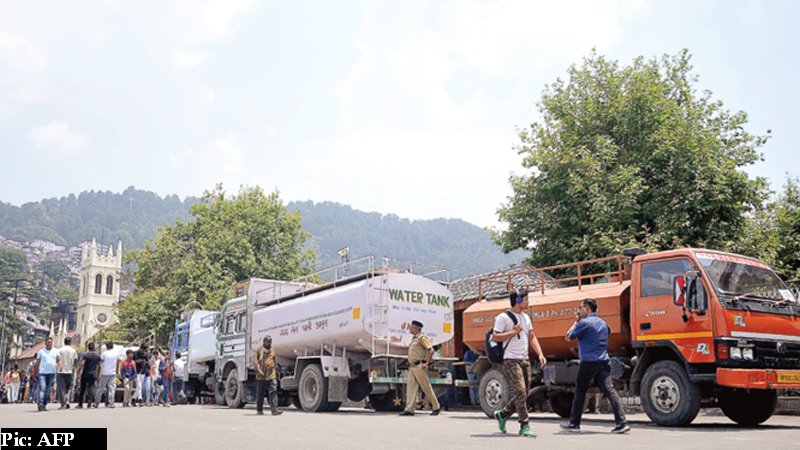 Shimla: The committee formed to supervise water supply to the Shimla town on Wednesday told the Government that MC Shimla received 21.75 MLD water, and claimed it was distributed according to the schedule.

However, except some selected localities, the public still complained that they did not receive water as per the scheduled or received an insignificant amount. The residents could still be seen receiving water through tankers. The residents of the Chakkar locality has today blocked the main road over the non-availability of drinking water.

It is pertinent to mention that after the eruption of protests in the town and intervention of the High Court of Himachal Pradesh, the Government is now claiming that it is taking various measures including installation of hand-pumps to deal with the water paucity.

Moreover, the High Court has directed the SMC to provide a daily status report regarding the procurement and distribution of water to the people.

About 2.25 lakh litre water was distributed through 27 tankers at 63 points in the city.
Today, as per the SMC’s schedule, water would be supplied to Krishna Nagar, Ram Bazaar, Lower Bazaar, Jakhu, Benmore, Engine Ghar, Sanjauli chowk, Dhalli and Mashobra.

Bhattakufar, Shanti Vihar, Malyana, and Sangti areas would receive a supply tomorrow, it was informed.

There are 9590 drinking water supply schemes in the State out of which 350 were critically affected, 1131 mildly affected. It was informed that 11 places were identified in Shimla city for installing handpumps and work has been started.

It is now that the Irrigation and Public Health Department is seizing illegal boring wells in the vicinity of Shimla. These wells have been bored illegally by water mafia under the nose of the department and were cashing on the water scarcity, which was aggravated by the government’s sluggishness and corruption of the departmental officers.

Mahender Singh Thakur, Irrigation and Public Health Minister, on Wednesday claimed that 14 MLD water would be procured from Gumma pumping station per day instead of 11 MLD at present. He visited Gumma and held a meeting with local people and public representative of Gram Panchayats Dewla, Majheewad and Gumma.

He said that local people agreed for releasing water for 15 hours instead of 12 hours for Gumma pumping station. It was decided that a timetable would be followed where water would be made available for Gumma pumping station from 3 PM to 6 AM. The rest 9 hours would be utilized for irrigation purpose through Kuhle
.
As a part of this negotiation, the Minister had promised the villagers that all traditional Kuhals of Gumma area would be renovated. He told them that he has already asked the department for preparing the DPR.

Further, the Government claimed that it is now installing tullu pumps in some habitations in Gumma Panchayat besides replacing the old water pipes in the area. He said that check dams and water harvesting tanks would be constructed in various areas along Nauti Khad.

The Minister also inspected the machinery and water storage tanks of Gumma pumping station and directed the officers to take steps regarding repairs wherever necessary.

He said that he was inspecting the situation in the field according to the direction of the Chief Minister and taking necessary action. The minister would possibly visit Giri pumping station on Thursday. He has assured better water supply within next two-three days.