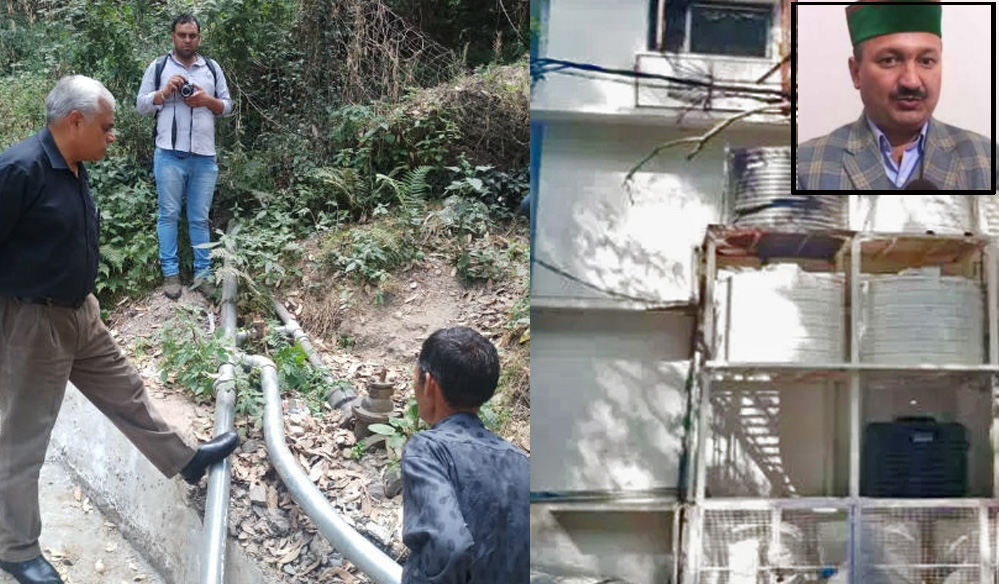 Shimla: Balbir Verma, the elected MLA of Bhartiya Janata Party from Chopal constituency, on Monday appeared in a video posted by one Mast Ram Verma on social media challenging the opposition and media over the case related to the alleged illegal connection of water supply to the Verma Apartments located in Jakhu, Shimla.

Mr M.R. Verma made a call to party-workers to share the video as much as they could to prove that it was just propaganda of the opposition to defame the innocent MLA.

This video should be uploaded on social media from at least 50 Facebook accounts,

Verma wrote to the workers.

He had made headlines in several Hindi and English Dailies and online media portals. The ruling BJP is facing a backlash from not only the opposition but also from the people.

The MLA took four days to come out of his shell and provide his first reaction to these serious allegations.  On Monday, Balbir Verma, in a 46 second-long video, said he would file a defamation case worth crores against those who termed him as a ‘water thief’, especially the opposition leaders. He also challenged that he would quite from the elected position of the MLA and would never fight elections again if it was proved that the connection was obtained on his name or it was an illegal connection.

However, the statement is shrouded by ambiguity as he is heard claiming that it was not illegal. It was hard to analyze what exactly the MLA wanted to convey. To clear these doubts, Himachal Watcher tried to reach the MLA multiple times but did not receive any response.

It wasn’t clear whether he wants to say that he was aware of the said connection and was confirming it was not illegal, or he was trying to distance himself from allegations.

The Deputy Commissioner of Shimla, Amit Kashyap, had ordered disconnecting a supply line in Jakhu locality on the complaint of some residents and photographs circulated on social media. The allegations said the apartment was constructed by the MLA, who is a contractor and builder by profession.

On May 31, 2018, the DC had found that a pipeline was connected to the main supply line of the Shimla MC. As per allegations, this pipeline, which was equal to the main line in terms of capacity, was leading to the Verma Apartments.

The residents had further alleged that this pipeline was illegally connected and was drawing their share of water.

The DC has asked the Commissioner of Shimla MC to file a report regarding the same within 15 days.

Heli-taxi between Shimla-Chandigarh to cut travel time to 20 mins for Rs. 2,999