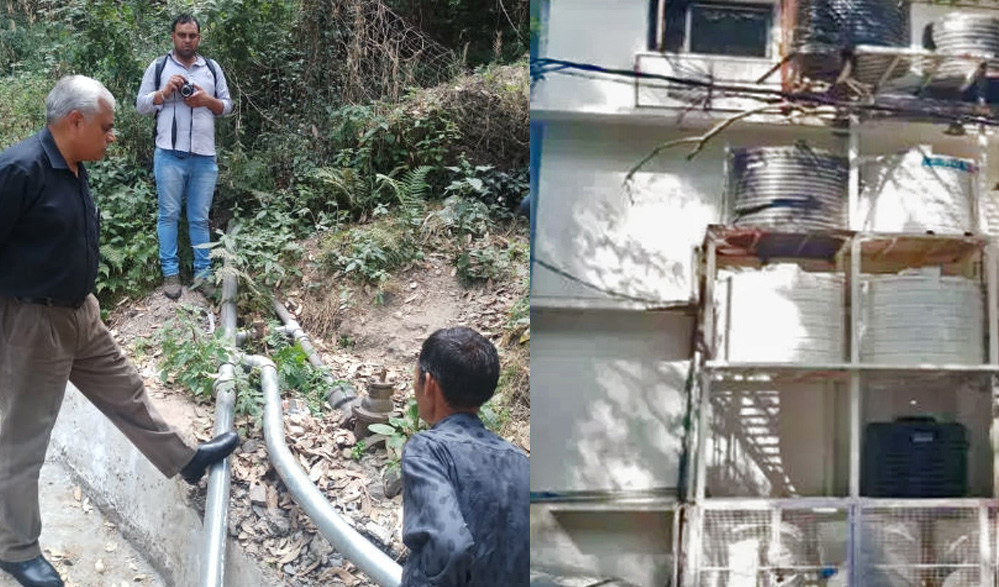 Shimla: As a setback for the ruling Bhartiya Janata Party, the name of one of its sitting MLAs has appeared in a case of water-theft. The Deputy Commissioner of Shimla on Thursday caught an illegal connection taken from main water supply line to an apartment in VIP locality of Jakhu.

The Government had been maintaining that there is a severe scarcity of water in Shimla for almost past two weeks as the supply schemes had dried up. However,  this claim appears to be misleading as this apartment was allegedly receiving a 24×7 supply to his apartment.

It was on the complaint of the people that the DC had to visit the spot where he found the allegations to be true. The people alleged that this large pipeline connected to the SMC supply line was drawing most of the water to the apartment, depriving the people of their share of water.

While the common people of the Shimla City have been lining up for two bucket drinking water for past two weeks now, the apartment was receiving 27×4 water supply despite government’s claims of water scarcity due to drying up of natural resources.

Though the district administration and the Municipal Corporation tried not to reveal the identity of the leader, media reports said the apartment belonged to Balbir Verma, who was recently served a notice by the SMC for due water bill of over Rs. 40 lakh.

When Himachal Watcher contacted the DC, he said he was busy in a meeting. Thereafter, we did not receive any response from him.

The flats in the apartment have been sold to various people in 2014, the reports said. As per the buyers, they had bought it from Balbir Verma, Chopal MLA. The DC claims he has given the MC Commissioner a time of 15 days to file a report regarding the same.

As per the District Administration, the Deputy Commissioner, Amit Kashyap, took note of a complaint and images circulated on social media.

The DC has reportedly ordered the concerned engineer of the Irrigation and Public Health Department to disconnect the line and seal it.

Other than the apartment, the DC also ordered a shut down of a guesthouse being run illegally in the same area.

The people are claiming that the leader was not the only one who had been stealing water from main supply lines. They said the administration had been ignoring such cases deliberately.

However, now as the State High Court has taken cognizance of the matter and is reviewing daily status reports from the SMC, the officials have begun to attend to the complaints of the people.

As a matter of fact, the government is using police to suppress the protests by the distressed people.

FIRs have been lodged against several protestors and some of them were even taken into custody for protesting.

Amid such chaos, it is ironical that the ruling party’s own leaders are displaying a disregard to the promises made by their party, which is in power currently. It is to be seen what action would be taken against this leader of the ruling party if anything is proved or the matter was not hushed up.

The protests still continue as the people are claiming they did not receive much relief despite announcements of the Chief Minister.  The district administration is claiming that it has seized some illegal borewells on Wednesday. But reports suggested that these borewells were still active, mostly after the sun goes down.

Meanwhile, the State High Court, who is supervising the Government’s measures to deal with the water scarcity, was reportedly disappointed as the public was still not relieved.  The court has also summoned Secretary, Irrigation and Public Health, to provide details of the water sources.