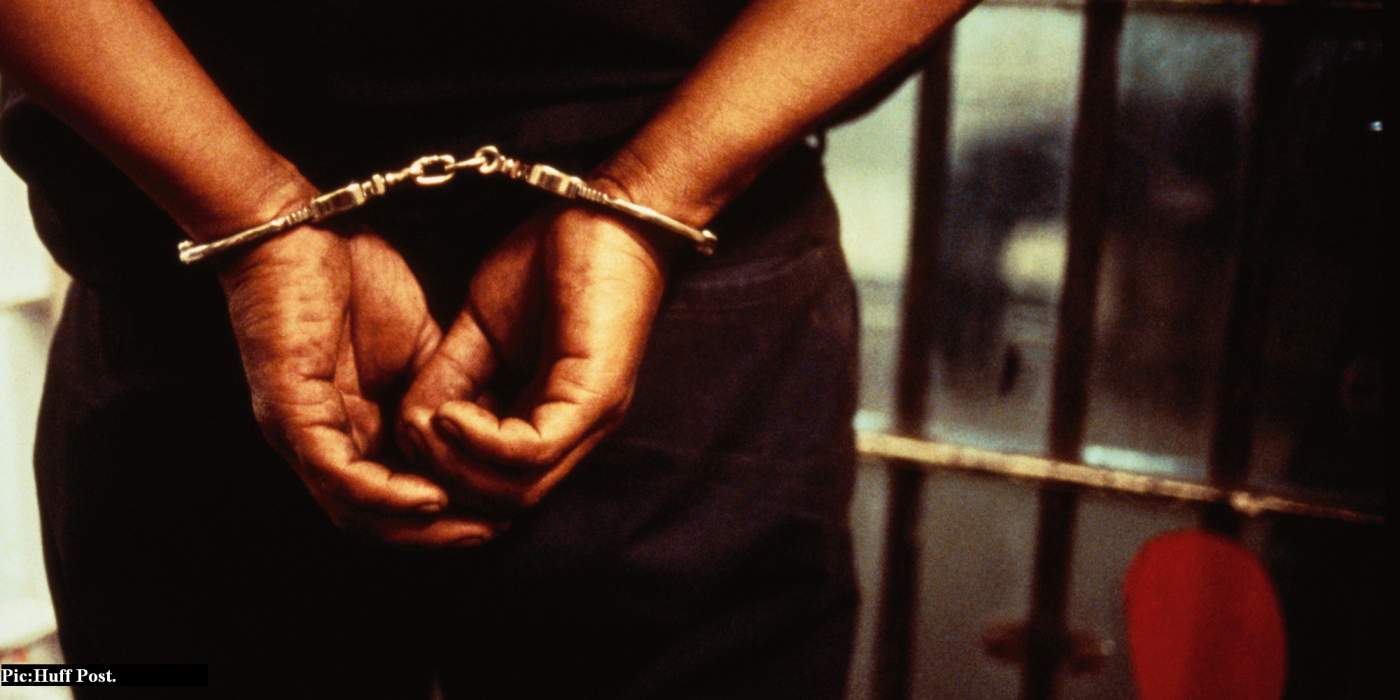 Shimla: Amid rising terror of drug/substance abuse in Himachal Pradesh, in yet another case, Shimla Police on July 11, 2018, held two youth after allegedly recovering 19 Chitta (Heroin) from their car on Jakhu road.

As per the police, at about 5 PM during patrolling with staff, Assistance Sub-Inspector, Sanjauli, Ranjana Sharma, intercepted a Maruti car (HP-06C-2020) parked on the roadside with two men aged 23 and 30 years. On searching the vehicle, the police allegedly recovered the said amount of Chitta from the dashboard.

As per the police, the youth said they had bought it from Delhi and managed to cross several check-posts and barriers easily. The cost of the said amount has been assessed to be over one lakh Indian rupees.

Both youth are residents of Rampur Tehsil of Shimla district. One of them hailed from Narian Tehsil while the second one belonged to Kareri Tehsil.

They were booked under Section 21,29-61-85 of the Narcotic Drugs and Psychotropic Substances (ND&PS) Act at Police Station Dhalli and is being investigated by ASI Ranjana.

Also Read: Story of Shimla youth who started with smoking charas at 17, ended up in jail at 22 as drug peddler

As per sources, the Shimla Police has registered about 50 cases under the ND&PS Act during the last six months. However, the police still has no clue about the kingpins and big fish involved in the supply chain. Questions are being raised why police could not trace any supplier through persons booked under ND&PS.

One nabbed in BBN with 90 grams of Chitta

The Baddi Police yesterday, on a tip-off, held a man with 90 gram Chitta he had smuggled from Punjab to supply in Solan. The accused was said to be a native of Punjab. As per police, several complaints were received regarding the accused.

Earlier, a man was arrested in Solan with allegedly 6 grams of Chitta on July 10. During the last two weeks, the number of cases of Chitta has reportedly witnessed a rise.

On Thursday, a video of a youth laying on the driving seat of a car in an unconscious state went viral on social media as the person who posted it claimed that the youth passed out after consuming Chitta. The user claimed the video was shot in Mandi district. A spoon and lighter were also visible in the video. 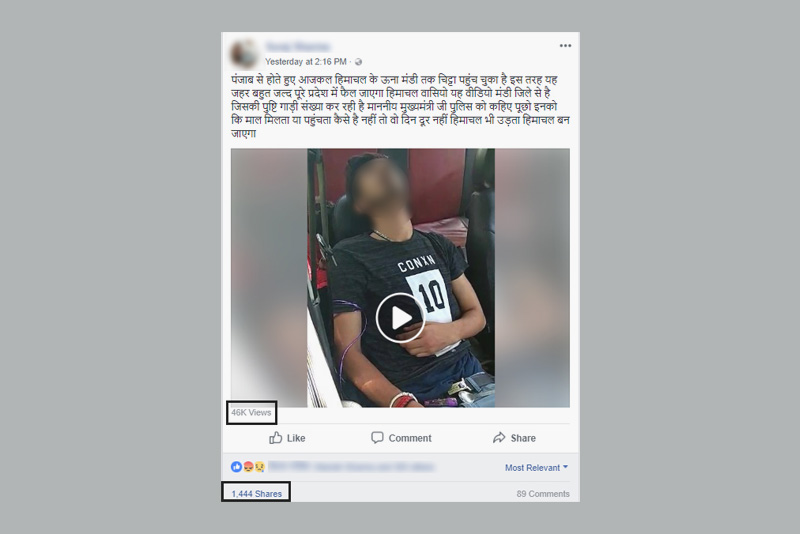 Screen shot of the said video

However, so far no confirmation was made by the police in this regard. A large number of people have shared it without any knowledge regarding the authenticity of the video.

Earlier, last month a 17-year-old was said to have died of an overdose of Chitta in Una district.

The youth of Una, Shimla, and Solan districts are believed to be the worst hit by increasing prevalence of drug/substance use.

‘Udta Himachal’ on the lines of Punjab is the phrase that is currently being used to denote the intensity of the situation in the State.

The Himachal Pradesh Police has claimed that a joint-operation with the law-enforcement agencies of the neighbouring state Punjab is underway to get hold of the drug peddlers, especially on the border areas.

Shimla-Himachal Pradesh Government has temporarily extended the ban on entry of poultry and poultry products into the State from neighbouring states for one more week. A notification to this regard was issued on January 18, 2021.

The Government said that during the past few days, there had been incidences of dumping of dead poultry in the border areas of the State. Samples were collected from these dead birds, and disposed of the remaining birds as per protocol, it said. NIHSAD Lab, Bhopal, has confirmed Avian Influenza-H5N8 in the dumped birds.

Hundreds of dead poultry birds were found dumped along the Parwanoo-Solan stretch on the National Highway. The police was yet to identify culprits responsible.

However, the State Government said that the Flu has not been detected in the local poultry.

The State Government said a sharp decline was reported in death of migratory birds due to avian influenza outbreak in the Pong dam lake wildlife sanctuary.

Ten Rapid Response Teams (RRTs) of Wildlife Wing would continue to work in the wetland for collection and safe disposal of dead birds as per protocol till no mortality is recorded.

Till January 18, 2021 outbreaks of Avian Influenza have been confirmed in 5 States for poultry birds and in 9 States for crows, migratory and wild bird.

Culling of poultry birds had to be taken in all the affected epicentres including CPDO, Mumbai. Culling operation of poultry in Haryana was also underway. The outbreak has is causing losses worth crores to poultry farmers.

Shimla– Amid skepticism over the COVID-19 vaccination, India has reported over 400 cases of adverse effect post-vaccination, informed the Ministry of Health. To be more specific, a total of 447 Adverse Event Following Immunization (AEFIs) were reported on 16th Jan & 17th Jan’21.

Most of the AEFIs reported so far are minor like Fever, Headache, Nausea etc.

In these cases, symptoms reported included dizziness, anxiety, nausea and shivering and persons recovered after management as per protocol, it was informed.

In Himachal, 2,499 health care workers were to be administered dose through 27 identified sites in the State on January 16. However, only 1535 healthcare workers could be vaccinated on the first day. It was 61 percent of this set target. The second round would be held today.

Two types of COVID-19 vaccines have been supplied for the vaccination drive. These include Covishield vaccine (made by Serum Institute of India Ltd) that has been supplied to all States/UTs.

The second is Covaxin vaccine (made by Bharat Biotech International Ltd) that has been supplied to 12 States.

An Adverse Event Following Immunization (AEFI) is any unexpected medical occurrence which follows immunization. It may not be related to the vaccine or vaccination process. The Ministry had laid down protocols for reporting, immediate case management at vaccination session site, transportation and hospitalization and further care of such cases. Protocols are also in place for systematic investigation and causality assessment of serious AEFIs, the Ministry said.

India has vaccinated the highest number of persons on Day1 under its COVID19 vaccination program, the world’s largest such exercise.

Total of 2,24,301 beneficiaries have been vaccinated till today as per the provisional report.

The second day of the massive countrywide COVID-19 vaccination program was also conducted successfully. A total of 553 sessions were held in six States. As many as 17,072 beneficiaries were vaccinated on Day2, as per the provisional reports.