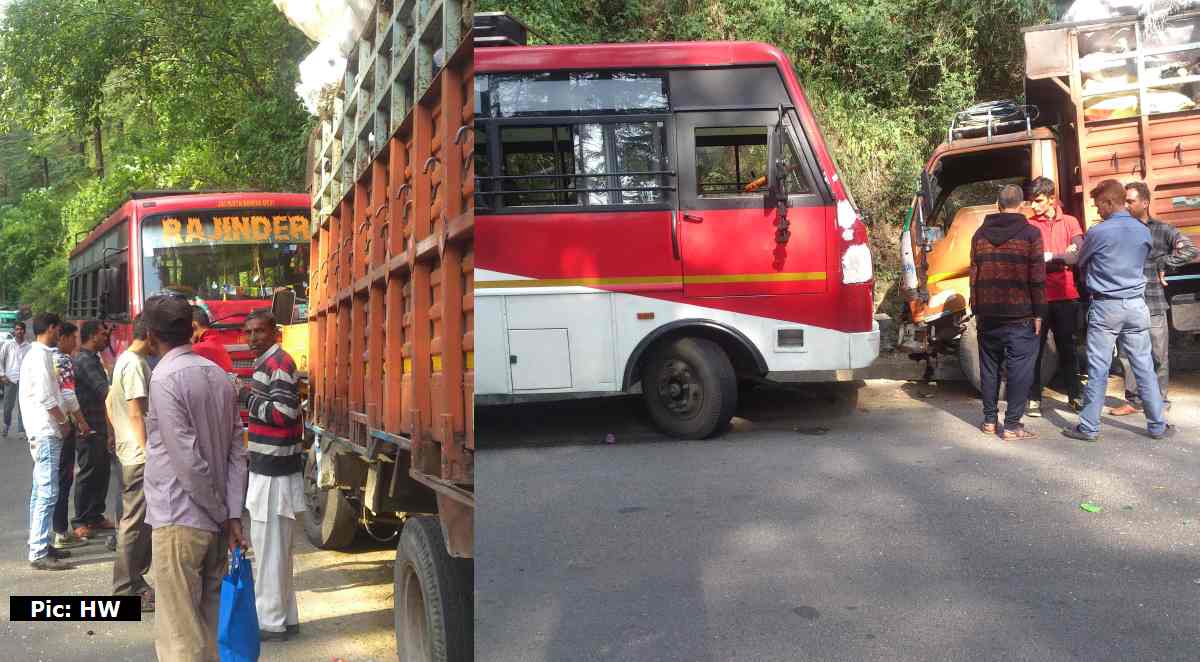 Shimla-Private bus operators of Shimla are already infamous for rash driving and racing with each other, competing over timings. Several accidents and incidents of rash driving have been reported in the past as well. However, the laxity of the district administration and the police continue to encourage them to carry on with their death races.

In yet another such incident, driver of a private bus ‘Rajendra’ rammed the bus loaded with passengers into a tipper parked on the roadside near BCS in Shimla City on Saturday evening. Fortunately, except a couple of passengers who received minor injuries, no one was hurt. The collision crushed the front part of the tipper. No one was present inside the tipper when the incident took place.

While the driver cited mechanical fault ( broken axle) as a reason for the accident, the passengers narrated a different story. The passengers could be seen telling the police that the driver was driving very rashly right from the Old ISBT. Several passengers asked the driver repeatedly to not drive rashly. The driver and the conductor, the passengers said, did not listen at all. Rather, they told passengers that it’s not a big deal and nothing would happen.

The passengers also complained that the driver and conductor were continuously passing obscene remarks to drivers of other vehicles including tourist vehicles. They also alleged the driver appeared to be under the influence of some intoxicating substance.

On the other hand, instead of apologizing to the passengers, the driver was seen arguing with them in the presence of the police. While the driver of the bus and tipper arrived at a mutual compromise, the injured passengers were not taken for medical examination, and simply sent to fetch medicines from nearby chemist.

The passenger also complained that the police took their statements, which were not recorded, lightly.

The accident has again exposed how laxity on the part of the district administration and the traffic police is turning private bus operators into a mafia. This mafia doesn’t care for traffic rules or the lives of the passengers.