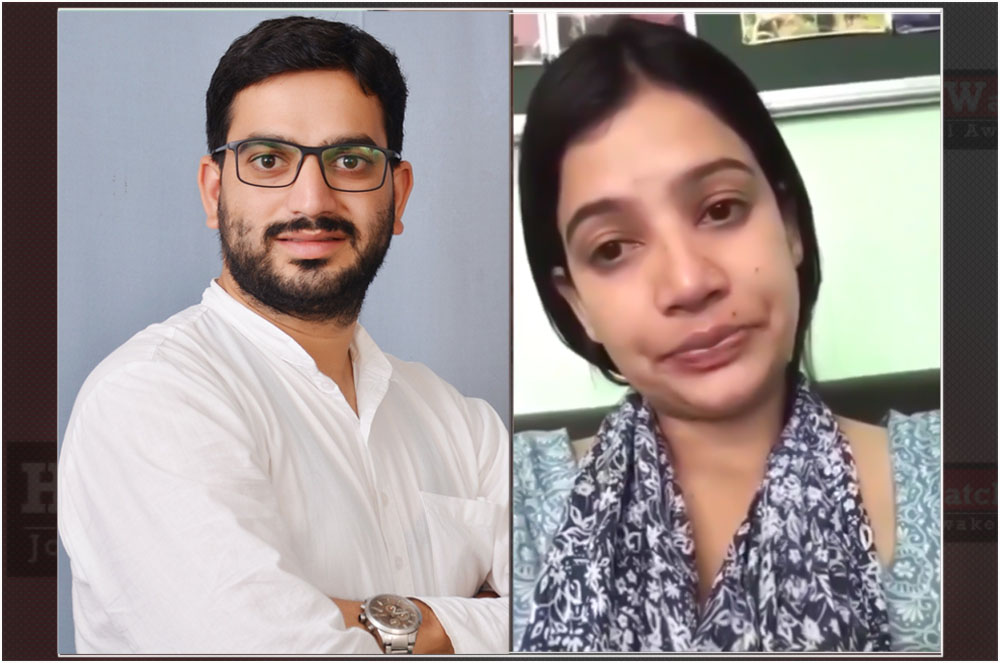 Dharamshala-Vishal Nehriya, an MLA of ruling Bharatiya Janata Party, has landed in controversy after his wife, Oshin Sharma, took to media and labelled serious allegations including mental and physical abuse. Oshin has also filed a police complaint and sought police protection.

Nehriya had won the Dharamshala seat in by-elections to the state assembly held in 2019. Oshin is a 2019- batch HAS officer currently deputed at Dharamshala. She recorded an 11-min video that appeared on social media yesterday. She was seen breaking down multiple times while narrating the allegations.

Oshin and Nehriya had tied the knot just only three months ago on April 26.

In this video, Oshin alleged that her husband slapped her thrice on Thursday. She said she had to lock the room to saved herself.  She showed pictures of her face she had taken after the incident.  She alleged she was slapped so hard that it left fingerprints on her face that still hurts.  She called her parents the very day and returned to her maternal house, she said in the video.

Oshin alleged that this wasn’t the first time Nehriya had assaulted her. She alleged that after four days of marriage, when she was Covid positive, Nehriya had expelled her from home at 4 am. He didn’t let her take her cellphone and she had to sit on the roadside as she couldn’t contact her parents.

She alleged that later she had to go back with Nehriya as he threatened to harm himself otherwise.

She recalled past incidents including those before their marriage too. Before their marriage on February 21, Nehriya had beaten her for almost half an hour in a drunken state, she alleged. When she tried to cancel the marriage, she was emotionally pressurized by Nehriya, his parents, and relatives, she further alleged.

She also alleged that Nehriya wasn’t even allowing her to take contraceptives.

“Vishal had been forcing me to conceive, but I had told him that he wasn’t mentally fit to be a father. He didn’t allow me to take contraceptives. But I managed to prevent pregnancy at this stage,” she alleged.

The reason for making the video, Oshin said, was the threats of false allegations that could come from her husband and his family. To keep her silent, she alleged, Nehriya used to threaten her that he would harm himself.  She also recounted some incidents regarding these alleged threats and emotional blackmails in the video.

The purpose of this video, she added, was to ensure her own and her family’s safety against any possible false allegations including those of causing harm to her husband.

While Nehriya wasn’t available for comments on these allegations, he had issued a statement in which he has reportedly alleged the opposite of what Oshin narrated. He said he wanted to solve the matter internally.

The news appeared all over the media and the case has become the talk of the town. A demand is being made that an proper investigation is ordered in the case.

No Delta Plus Case in Himachal So Far, Mortality Rate Doubles in Second Wave