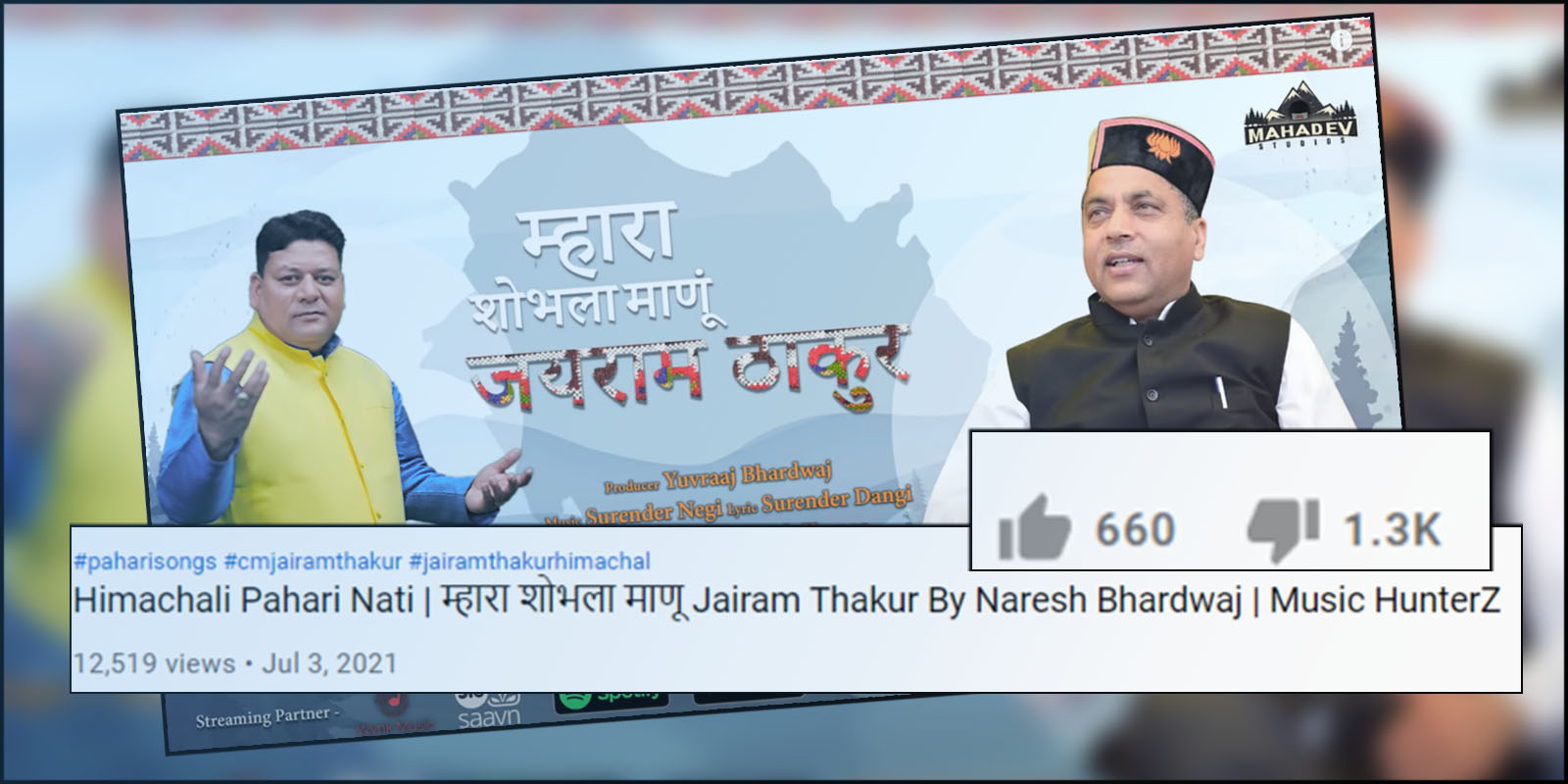 Shimla-Chief Minister Jairam Thakur recently faced backlash for patting his own back by launching and promoting a Pahari (Western Pahari) video song which, he claimed, highlighted his welfare schemes.

On YouTube, the video song garnered two times more dislikes than likes. At the time of writing this report, 663 people had liked the video, while over 1200 disliked it. The comments section flooded with hundreds of critical comments including “This song is made for dislikes”.

Chief Minister also posted the song on his personal and official Twitter handles, receiving the same reaction. Students, particularly, flooded the comments section on YouTube and Twitter.  The comments showcased that students were trying to unitedly express their anguish through this as, they alleged, the Chief Minister wasn’t paying any heed to their problems and safety amid the pandemic.

At the same time, it is pertinent to mention that the National Student Union of India (NSUI), HPU unit, is on a chain hunger strike over its demand to vaccinate all students and staff before opening the varsity and conducting the exams online, the same way they had been attending online classes. Student Federation of India (SFI) had also put forth a demand to vaccinate students and staff members and also suggested to set-up a dedicated vaccination centre on the varsity campus. There are a plethora of other student grievances, including their pending results of previous examinations and demand to conduct entrance exams for admission this year.

Coming back to the video, Chief Minister, while releasing the song said it would help in the promotion of Pahari culture and welfare schemes.

“The song would help in promotion and conservation of Pahari culture and tradition of the State. The artists have meticulously highlighted various schemes launched by the government for the welfare of the people of the State, Chief Minister said.

However, the first half of the song ” Mhara Shobhla Maanu Jai Ram Thakur” – which translates to “Our kind-hearted man Jairam Thakur”- narrates and celebrates the personal and political life of Jairam Thakur. Towards the end, the singer mentions about a couple of government schemes.

Secondly, the statement of Jairam Thakur about the promotion and conservation of Pahari culture is contrary to the actions of his government, as nothing significant has been done in this respect ever since he took over. No steps were taken for the promotion and conservation of the Western Pahari language which is by far the most significant and important part of the Pahari culture in Himachal Pradesh.

The dialects of the language group are spoken by the majority of people of the state according to the 2011 Census. For decades, there has also been a demand to get the language recognized under the 8th schedule of the Indian constitution and successive state governments over the years had mooted for this. BJP’s Prem Kumar Dhumal, during his tenure as CM in 2010, had also proposed a resolution in the Vidhan Sabha for getting the Pahari language recognized which was unanimously passed by the house.

Many groups for decades have demanded the recognition of the language and proposed to make it the second official language of the state. But come 2019, CM Jairam Thakur’s government laid a bill in the Vidhan Sabha to accord Sanskrit the status of the second language of Himachal Pradesh which was passed then, and in July 2020 the move became official. In the run-up to this decision, CM Jairam had given various statements in favour of Sanskrit, one being that his government was committed to popularize the Sanskrit language and that Sanskrit was a true symbol of the great Indian tradition and thought.

Hence, only time will tell why such a change in stance was taken by the RSS backed CM, as this transformation from supporting the great Indian mainland culture to now backing local Pahari culture has been very drastic. Also, whether this pro-Pahari pitch would reflect in the government policy moving forward or will just end up turning into an election gimmick still awaits to be seen.